Mitchell Marsh will be hoping Australian Test selectors aren’t interested in Big Bash League form after the axed vice-captain flopped in the Melbourne Renegades’ drought-breaking win over the Perth Scorchers at Marvel Stadium.

The Renegades had never beaten the Scorchers in eight previous attempts, but the home side’s well-balanced attacked strangled and then ran through the three-time champions after stand-in captain Tom Cooper won the “bat flip” and elected to field.

The Scorchers couldn’t even bat out their overs, dismantled for 103 and leaving six balls unused. 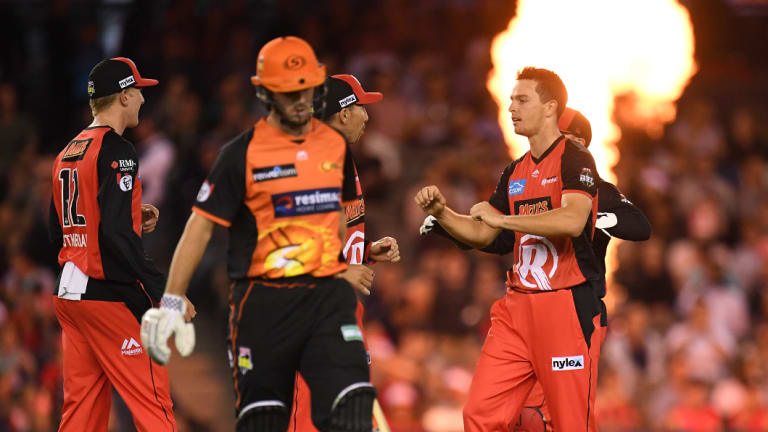 Mitchell Marsh failed with the bat while playing for the Perth Scorchers.Credit:AAP

With Test openers Aaron Finch and Marcus Harris unavailable, the Renegades fell to 4-17 as Perth quicks Jason Behrendorff and Nathan Coulter-Nile wreaked havoc, giving oxygen to the idea the Renegades could find a new and unusual way to lose to their opposition.

Sam Harper and Mohammad Nabi steadied, however, seeing off the new-ball bowlers before taking to Andrew Tye, Usman Qadir and David Willey in a 45-ball, fifth-wicket partnership of 68.

Harper, signed as a replacement player for Finch on the eve of the tournament, lived dangerously early, but built on his strong form in pre-BBL practice matches.

Nabi (35) and Harper (36) both fell in the 12th over bowled by Ashton Agar, with Harper run out by a direct hit from Michael Klinger after a mix-up with Dan Christian.

But Christian and debutant Will Sutherland did enough to ensure the Renegades could finally rid themselves of the seven-year-old monkey on their back. Christian sealed the deal with a six, with the Renegades winning by four wickets with 28 balls to spare in front of an underwhelming crowd of 15,011. 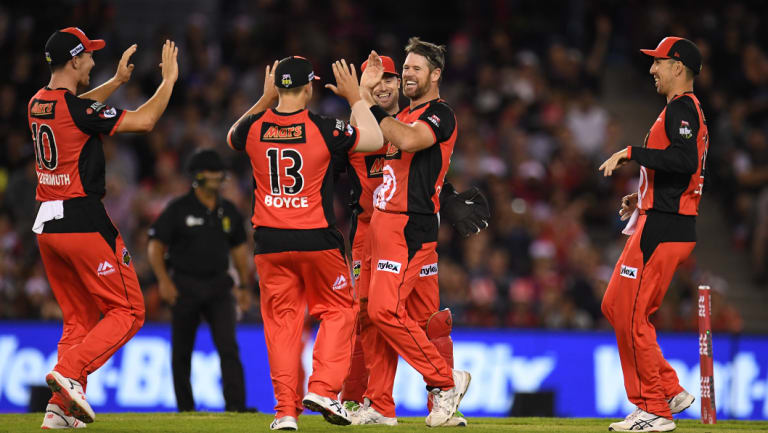 Daniel Christian of the Renegades, second from right, reacts after dismissing Michael Klinger of the Scorchers.Credit:AAP

Dropped ahead of the first Test against India, Marsh remains in contention to regain his spot in the Australian XI for next week’s Boxing Day Test. If he does take the struggling Peter Handscomb’s position in Australia’s top six it will not come on the back of any great recent body of work with the willow.

The all-rounder and Scorchers captain hasn’t made more than 44 in his six most recent Sheffield Shield innings, and posted just three from five balls on Thursday night, out after skying Jack Wildermuth to mid-on where he was caught by Sutherland.

That was part of a nine-over stretch between the sixth and 15th overs in which the Scorchers didn’t clear the boundary once. They did register a six in that period, benefitting from a special “house rule” when Ashton Turner lofted a ball into the Docklands roof off the bowling of Christian. 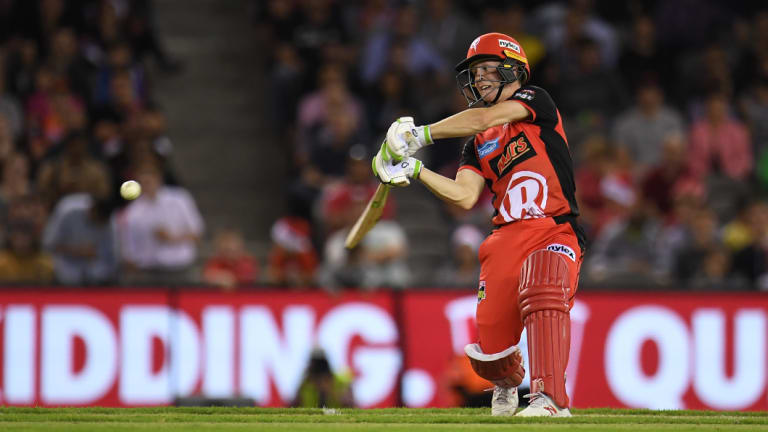 Sam Harper of the Renegades at the crease.Credit:AAP

Christian had reason to celebrate a ball later, however, when Turner spooned a catch to Cameron White. In his first game for the Renegades, veteran Christian took 3-22 from three overs, less than four days after playing in a South African domestic Twenty20 final.

Pakistani left-arm paceman Usman Khan Shinwari (2-17 from four overs) and leg-spinner Cameron Boyce (0-13 from four) also both fired on debut for the hosts, while Wildermuth (2-13) and Kane Richardson (3-23) were also outstanding.

With his ban less than 10 days away from ending, Cameron Bancroft watched on in a corporate box as the Scorchers collapsed.  The Test opener, suspended for his role in March's ball-tampering affair, is available to play from Perth's game against the Hobart Hurricanes in Launceston on December 30, and judging by this performance they will need him.