The Dutch midfielder was an unused sub as Cristiano Ronaldo’s late effort secured a comeback win for the Red Devils. 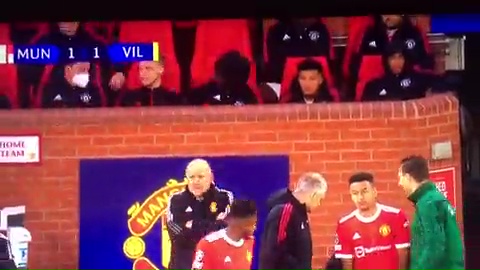 As United chased a goal, Solskjaer first opted to bring Nemanja Matic on in midfield.

He then quickly decided to make another sub in the centre of the park.

But instead of going for attack-minded Van de Beek, Solskjaer instead went for old favourite Fred.

His decision prompted an angry reaction from Van de Beek, who had to be calmed down by team-mates sat next to him.

Not content with the decision, Van de Beek then sat forward before appearing to throw his chewing gum in the direction of Solskjaer and Fred.

Fans instantly took Van de Beek’s side in the matter, with many sympathising with his situation.

Another wrote: “Feel bad for him, he’ll leave as soon as he gets the chance.”

One tweeted: “If I’m Donny I’m throwing it at Ole.”

One added: “Honestly has to leave for his own future.”