The Australian Olympic Committee’s response to a group of footballers being drunk and obnoxious on their flight home shows how much things have changed since Australia last sent an Olympic team to Tokyo.

Ian Chesterman, a chef de mission who has brought a sense of calmness and circumspection to Australia’s Tokyo campaign, said the AOC would leave it to the sports organisations to investigate the boorish behaviour of their athletes and impose whatever sanctions they deemed fit. 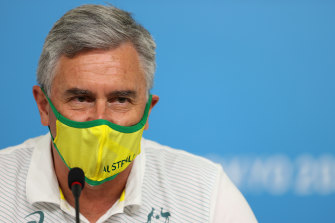 When asked whether the rugby and football players involved in a mid-air binge session on last week’s now notorious Japan Airlines flight would be banned from future Olympics, Chesterman said some perspective was needed.

“Those athletes are now back in Australia, they are being dealt with by their national federations and their integrity units and they will come up with appropriate action,” he said.

“I like the rugby sevens guys. I think they are a good group of guys. They have clearly made some bad mistakes here.

“I think this team is full of good people and I don’t think the behaviours of a few should be allowed to tarnish the reputation of the whole team. That is why I am pretty upset about this.” 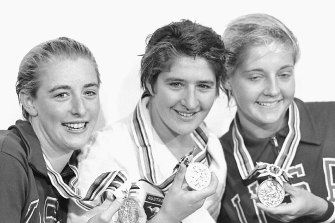 Compare this to what happened the last time Australian Olympians went on a tear in Tokyo.

In 1964, our greatest swimmer Dawn Fraser had just been picked to carry the Australian flag at the closing ceremony. To celebrate, she partied long and hard with the Australian hockey team at Tokyo’s Imperial Hotel.

At about 2.30am, Fraser and some other teammates came up the idea of stealing a flag. They decided the best place to go hunting was the Emporer’s Palace. They sneaked inside the grounds and managed to pull down an Olympic banner from a flag pole.

Then the police arrived.

Fraser has recounted the story many times of how she hid from the cops in a bush, jumped on a policeman’s bicycle and rode it to the palace moat and what she thought was safety. “I figured no policeman would ever catch me once I hit the moat,” she wrote in her autobiography.

Her midnight triathlon instead finished inside the Marunouchi Police Station after she scaled a brick wall, jumped onto the concrete edge of the moat and hurt her ankle. She convinced police to let her go and marched at the closing ceremony with a heavy limp.

What has since become a part of Australian sporting folklore had a nasty post-script for Fraser. When Australian team officials found out about what had happened, they banned her from swimming for her country for 10 years.

At the time, she was the world’s dominant freestyle sprinter and had just turned 27 years old. She never competed again.

The reported behaviour of some members of the rugby sevens and Olyroos was by comparison, tawdry and mundane.

On the night before they were due to leave, the rugby boys had a skinful in the Olympic village. They left their rooms in a dreadful state and then headed to the airport. Once they boarded, they kept on drinking and were joined by some footballers. It soon got out of hand.

They pinched grog from the galley fridge, took off their masks, annoyed other passengers, embarrassed Australian team members and ignored polite requests by cabin crew to pull their heads in. One of them spewed on the floor of a toilet.

Chesterman said it was not yet known how many athletes were involved, who they were and whether they were already drunk when they boarded the flight.

He refused to accept the COVID-19 restrictions on all athletes at these Games – or the quarantine arrangements that await them in Australia – as excuses for athletes behaving badly at the end of their competitions.

“There are appropriate ways to release the unquestionable tension and stress that is involved in an Olympic campaign,” he said. “It is completely inappropriate to behave that way on a plane.”

He added the athletes involved weren’t bad people, they had just done something stupid. The airline brought the matter to the AOC’s attention but did not make a formal complaint. Police and other authorities weren’t involved.

If only Fraser had someone like Chesterman in her corner all those years ago.

Never miss a medal or great sporting moment with our Olympic update emailed daily. Sign up for our Sport newsletter here.