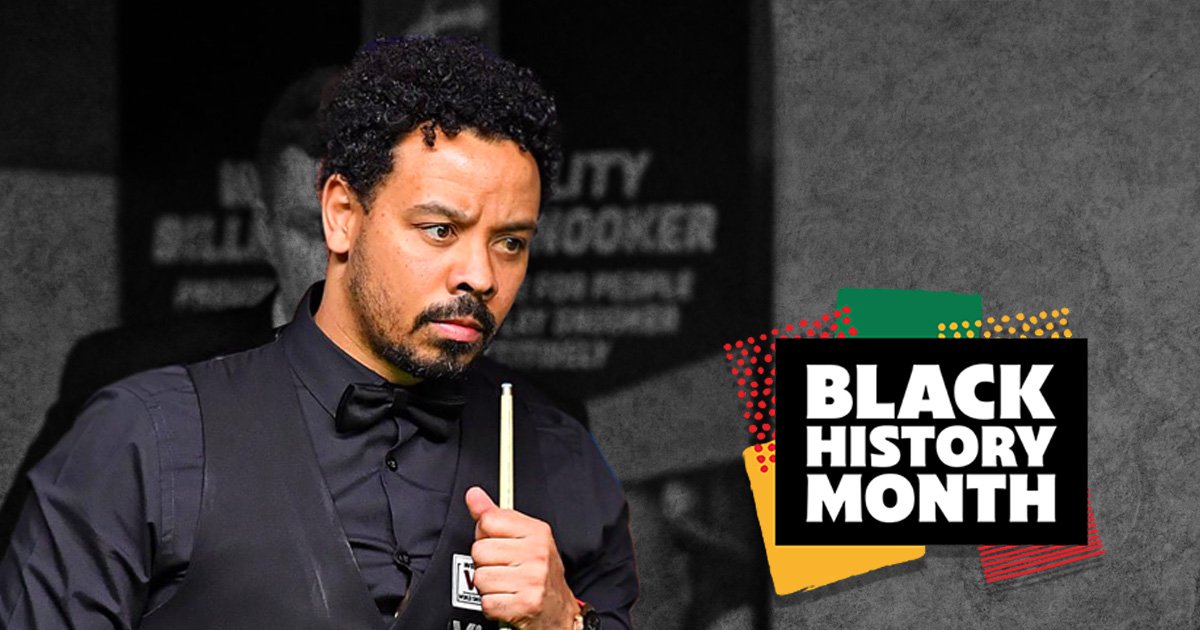 Traditionally a very white-dominated sport, snooker has done great work in attracting Asian players into the game, but there continues to be an obvious lack of diversity when it comes to the Black community.

It is far from the only sport which is predominantly white at elite level, but there are few televised sports that have quite so few Black representatives.

Since first turning professional in 1991, Rory McLeod has been the only Black player competing in snooker’s biggest tournaments on a regular basis.

Speaking earlier this year, McLeod told Eurosport, ‘maybe snooker is still in the dark ages’ when it comes to diversity.

Lee Stephens is another rare example of a Black player who can produce world class snooker, proving himself to be one of the finest players outside the professional ranks when he reached the WSF Championship Final earlier this year.

At 40 years old and only playing part-time, it was a remarkable achievement for Stephens to finish runner-up in the biggest amateur event in the world, and he feels the success was not seized upon by snooker bosses.

There is clear lack of participation from the Black community in elite snooker and Stephens would like to see more active promotion, especially when there is an obvious opportunity for it.

‘I think World Snooker may have missed a trick in promoting him [McLeod] to the Black community,’ Stephens told Metro.co.uk. ‘I think they may well have missed that same trick with me in not giving me a tour card – and I’m absolutely not saying that I deserved it.

‘There was an outside chance I might have got one, and there was the chance that me being Black could have helped. There’s not many Black players around and if they want to promote diversity in the game then that’s an angle.

‘That didn’t come to fruition and by no means do I think I deserved it just because I’m Black, but it was a thought. If they were looking to promote snooker in the Black community it was a good opportunity to do so.

‘Do I think there’s enough diversity in snooker from a Black perspective? Obviously there isn’t. That’s clear to see. But at the same time people have to deserve their places.

‘They need to do something to promote it without giving anything away. You need to earn and deserve the right to tour cards, but World Snooker can absolutely do more at grassroots level.

‘Probably, more than anything, just to understand why there’s a lack of diversity in snooker, because it’s coming from somewhere. What are they not doing, what are they missing at the lower echelons of the game? The focus needs to change somewhere to encourage the Black community.’

World Snooker Tour have been working hard to encourage diversity in terms of women’s snooker, offering tour cards to the top four female players to compete on the main tour, and by bringing in the new World Mixed Doubles event.

The aim is to improve visibility of the female players and encourage young girls around the world to be inspired to play the game, or at least watch it, as a result.

Stephens would love to see the same focus for the Black community, although admits that the answers to the questions are not as simple.

‘It’s the same argument with having women on tour: so girls can see them and want to play,’ he said. ‘They want to grow the game for women, which is brilliant, get more women playing, absolutely fantastic. It would be great to grow the game in the Black community but being Black is obviously completely different.

‘Give four places on tour to the four highest-ranked Black people? How do you do that? You don’t.

‘I get that World Snooker want to grow the diversity in the game, but it’s a hard challenge. But what they can do is promote it as much as possible and that starts at grassroots.

‘There’s a young lad called Hamim Hussein, a really good player. There’s a chance for World Snooker to highlight a guy and promote the game in the right areas. Rory and I only have so much reach because we’re at the wrong end of our careers to have an impact.

‘Let’s get the view of Hamim, get his perspective out there, he’s in the midst of it now at his age when the game is in the healthiest place it’s ever been – taking Covid out of the equation. Let’s go and promote him. I think there needs to be a conscious effort from WST to promote the game in diverse communities.

‘The Mixed Doubles, they couldn’t get enough of that and what a success it was, it was great. They’re recognising that they need to put the effort in there, because they want to grow the women’s game, so let’s do it with Black players.

‘When somebody of colour does something of significance then make the most of it. Hamim has been doing great on the Q Tour, highlight it. Farakh [Ajaib] won one, highlight it. Shout from the roofs about it. They should be screaming about it.

‘I think the efforts and vision needs to be opened up. There’s a bigger community out there to promote the sport to. It’s selective where they want to promote and push, and I don’t see any push for the Black community at the moment and they’re missing an opportunity.

Stephens feels it is especially disappointing that there is not more effort made to encourage the Black community because he has always found the environment within the sport welcoming and has never experienced any racism in his long involvement with snooker.

‘I’ve never ever heard of any racism issues in snooker and I certainly haven’t felt any my way,’ he said. ‘For me, it’s just an effort thing from World Snooker.

‘In my example, WSF final, played in the World Championship qualifiers, now in the UK qualifiers, I’ve not heard boo to a goose from anybody, no promotion or mention and that’s an opportunity to highlight it.

‘The headline doesn’t have to say ‘Black Man Reaches World Amateur Final’ everyone can see that, but they’ve missed a chance to promote diversity off the back of something good in the game.

‘I’ve not had one iota of racism in snooker. Not a sniff of it. The environment is great, I love being away with the players. I certainly haven’t seen any issues with racism. But if you want to see young Black players coming through, they’ve got to see a positive impact from the top and that’s got to be World Snooker highlighting that from within.’

Stephens’ own story is a fascinating one, after being heavily involved in snooker as a youngster, but then largely giving up on the game for years as he chose to go down a different career path.

‘Seven or eight years ago I put my cue down completely, didn’t hit a ball for two years,’ he explained. ‘Then my mate suggested playing at the local Rileys, I went for it and I made a 133. That sparked something back in me.

‘I’ve played the last three or four Q Schools, and now I’m 40 my focus starting moving onto the Seniors stuff. Then the World Amateur happened, which threw the whole thing up into the air.

‘The World qualifiers came about. I got the UK invite recently as well. and hopefully, all being well, the Shoot Out which would be an amazing end to the run. It would sort of cap off everything that has come off the WSF, that would probably be the last perk I’d get from it.

‘I love it and have been loving this ride. It’s more than I expected at 40 years of age as a part-time snooker player. I’m not on the table for six or seven hours a day, nowhere near it. I’m in at 6am for two hours and that’s my day done and into my business. I really just practice solidly for two or three weeks before a tournament.

‘I don’t have aspirations of being a pro snooker player anymore because I’m 40 and my priorities are different. I just love the environment, I love playing tournaments, getting the suit on, going out there to play. I love snooker.’