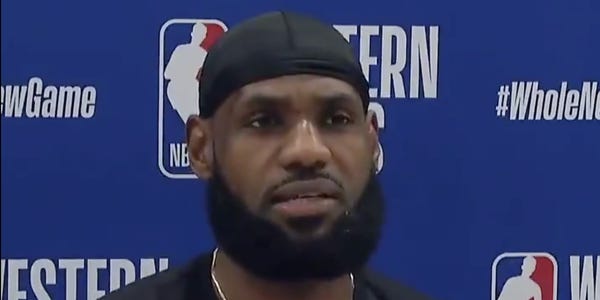 Los Angeles Lakers star LeBron James said on Friday night it "pissed me off" that he didn't win the NBA MVP award this year, and that only 16 of the 101 strong panel of judges voted for him to win the award.

The Milwaukee Bucks' Giannis Antetokounmpo was named the winner of the Most Valuable Player award for a second consecutive season on Friday, winning by a landslide and garnering 85 first place votes to James' 16.

That margin annoyed James, who gave a surprisingly honest assessment of his feelings about missing out on what would have been his fifth league MVP title, and his first since 2013.

"It pissed me off. That's my true answer," James said in a press conference after the Lakers beat the Denver Nuggets 126 to 114 in the first game of the Western Conference finals.

"That's what pissed me off more than anything. You know, not saying that the winner wasn't deserving of the MVP.

"But that pissed me off. And I finished second a lot in my career, either from a championship, and now four times as an MVP."

You can see video of James' answer when asked about missing out on the MVP title below:

James went on to voice the same displeasure on Twitter after the game, tweeting:

Miami is already 2-0 up against the Boston Celtics in the Eastern Conference finals, and looks likely to make the championship series, meaning James' Lakers could face off against the team with whom he won championships in 2012 and 2013.