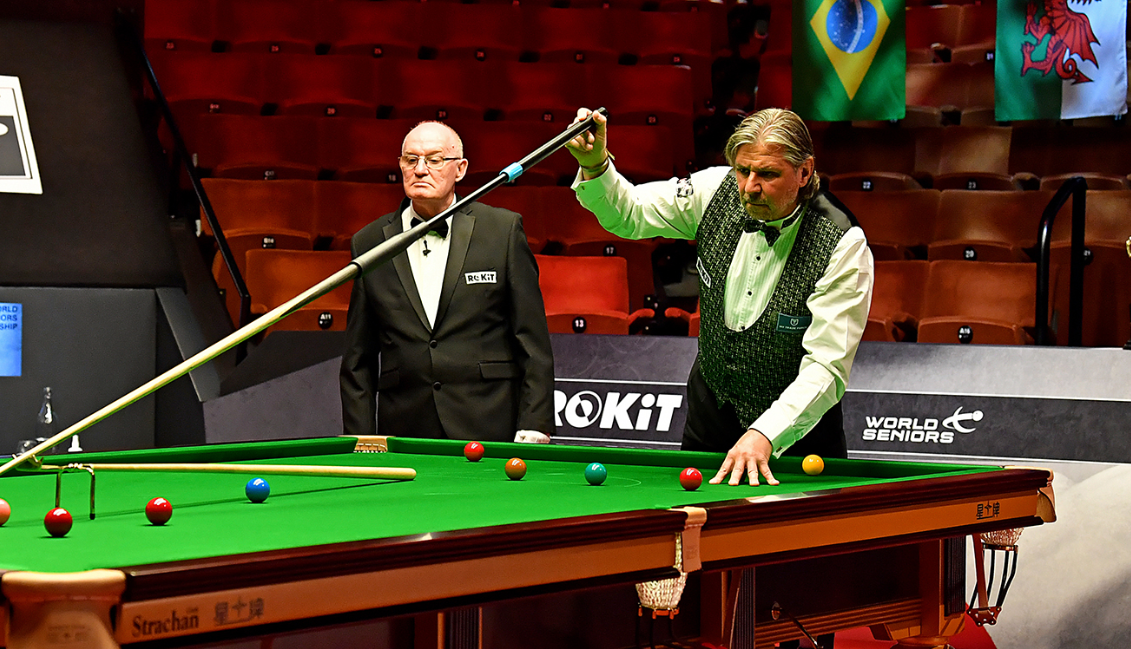 Tony Knowles, icon of snooker’s boom era of the 1980s, has returned to the spotlight thanks to the BBC’s recent Gods of Snooker documentary and also because the veteran has got his cue out of its case once again.

The 65-year-old played at the World Seniors Championship earlier this month and is hoping to return to the main tour when he enters Q School this week.

It would be a remarkable achievement to retake his place as a professional once again, 40 years after he made his World Championship debut at the Crucible, although he fancies his chances of doing just that.

It was his ’80s exploits that saw Knowles thrust back onto our television screens most notably this year, though, starring in the Louis Theroux-produced Gods of Snooker, which the Lancashire legend was thoroughly impressed with.

‘I watched all three episodes, I thought Louis Theroux did a very good job of capturing most of it,’ Knowles told Metro.co.uk. ‘Obviously there’s a few things said that were probably not fully to the point.

‘At least it’s better than the one before, The Rack Pack, this was a lot more accurate. That was a dramatisation that wasn’t really accurate enough, upset a few people, but never mind.’

As is so often the case when looking back at that time in snooker, it wasn’t Knowles’ two ranking titles or three runs to the World Championship semi-final they looked at, but his controversies off the table.

Namely the kiss-and-tell story claiming he liked to wear women’s underwear and his subsequent selling of his own story in 1984, which saw him pose with topless models in the tabloids and incur a hefty fine for bringing snooker into disrepute.

Asked whether his achievements on the table have been overshadowed by the scandal off it, Tony said: ‘Yeah a lot of time it is, but it doesn’t bother me anymore.

‘They miss a lot of things out, it seems to me, at the high point.’

Knowles feels his impressive career, which saw him reach a high of number two in the world rankings, is not only overshadowed by what went on off the table, but it was actually damaged and curtailed as a result.

‘I was at the top of my game in 1983, at my peak,’ Knowles explained. ‘Before that was 1979 as an amateur I was at a peak but unfortunately they wouldn’t let me turn professional, but in ’83 I was one of the best players in the world and I thought I could have won the title in ’83 when I lost to Cliff Thorburn [in the semi-finals].

‘I came back in ’85 but I was still surrounded by a lot of bloody publicity and everything. I wasn’t playing well, nowhere near my best, and I got to the semi-final and lost to Dennis Taylor.

‘1986 I lost in the semi-final not playing me best either, then I started to drift away. I couldn’t recapture my natural game and play the way I was playing way back in ’82 or ’83, it stopped me winning those titles around that time.’

There is certainly some regret as Knowles remembers those days, which saw him team up with manager Howard Kruger and Alex Higgins in the anti-Matchroom stable, left aside by Barry Hearn who wanted a squeaky clean image for his brand.

‘I was involved with Kruger and Higgins, countering Matchroom, a few things went wrong there,’ he said. ‘I probably should have won more than I have done.

‘But obviously I enjoyed my time playing, this is probably one of the reasons why now I’m interested.

‘In the 90s the game sort of went sideways, it went down a bit. Snooker became out of favour, I went on the board for a short period to try and improve things but I was fighting a losing battle there. Then there was all the in house fighting between all the different camps trying to take over the game at the time. Barry Hearn nicked the game for a pound, basically.’

Hearn retired this year as chairman of World Snooker Tour and Knowles has a seemingly grudging respect for the former head of Matchroom and what he achieved in snooker.

‘It was inevitable that snooker would have always resurfaced,’ said Knowles. ‘It’s the players and the matches that make the game.

‘All you need is someone to do the administration, it wasn’t difficult, don’t forget that they’re making a lot of money out of it.

‘Overall you’ve got to take your hat off to him, he’s a good administrator and a good promoter, better than he was a manager.’

Back to the future and Knowles gets his Q School campaign underway on Thursday in Sheffield and is relishing the competition.

On the practice table on a regular basis, the veteran is just keen to play some competitive snooker, which he has found hard to come by.

‘I am [looking forward to Q School], I’ve been doing a bit of practice every day, which I probably haven’t done for 20 years,’ he said. ‘It seems to me that Q School is near enough the only competitive snooker you can actually play.

‘There’s the Seniors, and the qualifying in there, but if you’re lucky enough to win a ticket at Q School you get to play in a lot of matches for two years. That’s the reason behind me playing. Also, if people don’t play and you’re at the top of the list without qualifying, you can get in through top ups. The incentive’s there.

‘I’m enjoying it. I’ve been trying to short circuit the practice a bit and work on a few things that I was failing at before in matches. The consistency and break-building side of the game on these fast cloths and the shiny balls. It makes it a lot more intricate and slippy, you’ve got to get used to the different shot-stroke and timing from a club table to the match table.

‘It’s a massive difference. Any slight problem with the tables now and they’re up in arms. In our day we had to get used to changing balls, cloths, tables. We had to play with lots of changes.’

Knowles is well aware it will be difficult at Q School, but is hoping experience will win the day and an incredible return to pro snooker is doable.

‘It all depends, I’ve got the knowledge, the experience, I can play all the shots,’ he said. ‘It’s just if I can put it all together, get better as I go along.

‘Confidence, comfort and just being there and being able to play the shots as I see them, I think I’ll be okay. Although I might be coming up against the next Judd Trump, you just don’t know.’