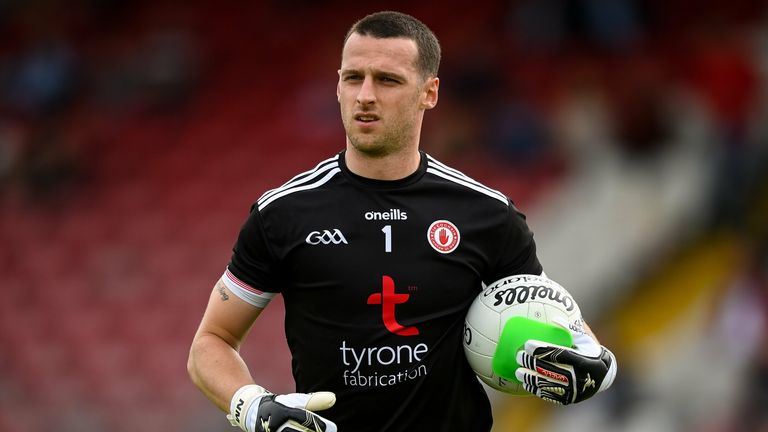 The fascinating goalkeeper duel in the Ulster final was undoubtedly a landmark moment in the genre.

Niall Morgan and Rory Beggan were not only needed for their own teams’ restarts, but also played key roles in preventing the opposition gain a foothold.

So could Tyrone’s tactics be developed even further as they face the aggressive Kerry press on Saturday?

“It’s the most important part of the game, in this modern [Gaelic football] that we’ve seen develop over the last number of years,” Kieran Donaghy said of kick-outs, looking ahead to the All-Ireland semi-final on Inside The Game.

“For me, Niall Morgan has been one of the best.

“[For] Kerry, Shane Ryan was injured, he hasn’t overly really settled to be very comfortable in that role as a goalkeeper. He’s an outfield player with his club, he plays full-forward for Rathmore. And I think he’s just starting to find his feet. He’s had a few fluttery issues in games with kick-outs.

“That’s something that Tyrone will no doubt look in on. How do they ramp up the pressure? They did quite a good job on Rory Beggan early on in the game. Rory Beggan is one of the best on the kick-out in the GAA. And he was all over the place early on against Tyrone when Tyrone built up their lead. So that’s certainly an area where they’ll look to focus in on.

“Kerry’s press has been quite effective in the Munster Championship. But that’s caveated by the level of keeper they have played in Munster, it wouldn’t be at Niall Morgan’s level.”

Both management teams will be looking to utilise their net-minders as spare men as part of the kick-out press.

“The kick-outs are going to be fascinating,” Donaghy continued. “The role of the keeper, we saw Niall Morgan up at the top of a full-court press for one of Rory Beggan’s kick-outs when the game was in the melting pot in the Ulster final, which was quite amazing to see that level of belief in your game to be able to do that. I’m not sure the Tyrone management would have been overly happy with it, but he was there!

“You could see something, Shane Ryan being adventurous on the Kerry press out on his own 45 as a member of the back-two on the press. As an outfield player, could he get more involved on the ball for Kerry if Tyrone put a high press on him? Kerry have not faced that in the Munster Championship, so there’s loads of questions around these two men, and they will have a huge bearing on whoever is going to win this game.” Meanwhile, Peter Canavan agreed that it is going to be a crucial battle.

“That’s the way Niall plays. That’s his natural game,” the Tyrone great noted when discussing Morgan’s eagerness to push up the field.

“Niall is very comfortable on the ball. I hope he’s not up marking the Kerry corner-backs for the kick-out, I don’t think he has any need to press that far up. But Kieran is right, the battle of the kick-outs is going to be so important.

“Down in Killarney, Kerry were wiping the floor with them. Not only were they winning kick-outs, but they were pouncing and attacking straight away, and getting goals from that. So that’s massive on Saturday. Tyrone will hope to have addressed that problem.

“When Clare played Kerry, there were spells when Clare were effective pushing up on the Kerry kick-out.