The partnership between Kemba Walker and James Borrego began over dinner in Charlotte, shortly after Borrego got the Hornets’ head-coaching job earlier this year and as Walker, the team’s 28-year-old point guard, moved toward the final season of his current contract.

“We got to meet for the first time and just sit and talk life, talk basketball,” Borrego said. “We started with life, though. I just wanted to get to know him.

“I really wanted to partner with him,” Borrego continued, “to engage with him, and see what he was feeling, what he has experienced in the last couple of years because I could feel the disappointment on him.”

That disappointment can be traced directly to the only statistic Walker ever seems to care about, which is whether his team wins or loses. After leading Connecticut to a national championship in 2011, Walker was selected by the Hornets with the ninth pick of the first round of the 2011 N.B.A. draft. Yet even as Walker blossomed into an elite player, the Hornets had just two winning seasons in his first seven with the team, and they have yet to win a playoff series since he joined the club.

That the Hornets have yet to build a strong roster around Walker has led, naturally, to consistent rumors that the team might deal him. But Charlotte owner Michael Jordan, who sees himself in Walker, has made him all but unattainable via a trade, making this final year of Walker’s current bargain of a contract — four years, $48 million — a cooperative venture between player and coach to determine if each is a future fit for the other. 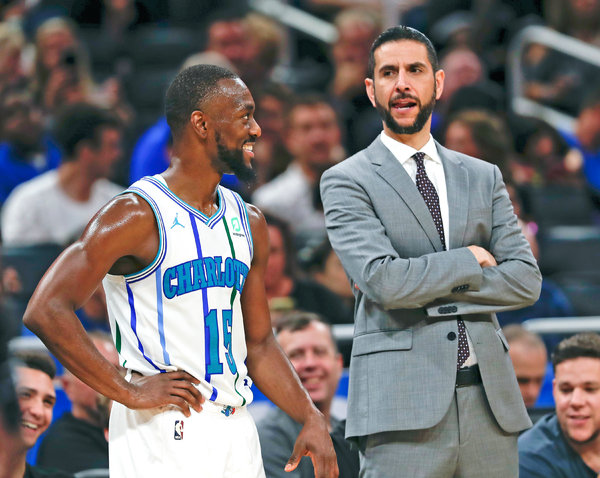 The collaboration has so far taken Walker’s game to another level, placing him among the biggest stars in the N.B.A. as the 2018-19 season progresses. Through games of Dec. 3, Walker, who has twice been an All-Star, is posting the best numbers of his career in virtually every category — even in areas that aren’t typically talked about with the 6-foot 1-inch Walker, such as rebounding and defending the pick-and-roll.

For his part, Walker is taking it all in stride, particularly when the word superstar is put next to his name.

“I’m not sure,” Walker said. “Superstar — I mean, when I think of superstar I think of LeBron James, Kevin Durant, Stephen Curry, names like that. I don’t know if I can put myself in that category.”

But his performance so far has done just that. Walker ranks third in the N.B.A. in offensive plus/minus, a catchall stat to measure the overall value of a player’s offensive game. Ranking No. 4 in that measurement is James; No. 5 is Durant. Walker is also taking more 3-pointers than ever before, while still making them (36.2 percent) at around his career rate. He’s increased his efficiency from inside the arc as well, and it is now a career-best 51 percent.

And in perhaps the greatest marker of a star, he’s putting up performances like his 60-point effort against Philadelphia on Nov. 17 (the Sixers made it clear after the game that they simply had no answer for Walker), and making his teammates better as well. Having the ball in his hands hasn’t come at the expense of other Hornets being able to make plays, and eight Hornets have an assist percentage of at least 10, reflecting a team that makes the right pass as often as anyone, particularly considering Charlotte’s league-low turnover rate.

“He’s just drawing so much attention to himself that a lot of teams are trying to double-team him, blitz those high pick-and-rolls,” said Cody Zeller, the Hornets center and longtime Walker teammate. Zeller’s assist percentage was 7.4 last season but has ballooned to 12 this year. “So, Kemba is very unselfish. He has common sense to make plays. A lot of times he takes on a double team, kicks it to me and then it’s on me to create for the next opportunity.”

For Walker, there’s been no massive change in diet, no secret workout regimen. But he has embraced Borrego’s call for making quicker decisions — something apart from raw pace numbers, but which has led to a team that dribbles less and passes more. So while the Hornets have fallen from eighth in the league last year in pace to 12th this season, their offensive efficiency has jumped from 13th to 7th, meaning they are making each possession count.

Even on the defensive end, the undersized Walker has found another level. He has improved in pick-and-roll defending, striving to get tougher in an area in which he had been susceptible to getting victimized on either the screen or the switch. Walker now ranks among the better guards in the league on such plays.

“It’s Kemba’s effort,” Borrego said. “We’ve tweaked our defense from how they’ve played in the past. It is a team effort, but I give Kemba a ton of credit. His effort through the pick-and-roll is as good as anybody. He’s fighting through screens, he’s guarding the best point guards every single night, and he’s competing on that end of the floor.”

Walker is even grabbing defensive rebounds at the best rate since his rookie year, and they are vital rebounds, too. In a recent win over the Milwaukee Bucks, it was Walker who came up with a pair of rebounds in the final minute that ended Milwaukee possessions and sealed the win.

“It’s just the competitor in him,” Zeller said, and added: “Late in the game, we have confidence that he’s going to make big plays — not just the big shot, but getting a steal or a big rebound inside. He’s going to do whatever it takes.”

And yet, for all Walker’s heroics, the Hornets were just 11-12 going into Wednesday night’s game against Minnesota.

As a result, Charlotte and Walker both face a question that will come to define Walker’s career and the long-term path of the organization: Can a team build around Kemba Walker? And should Walker bet on the Hornets finally being able to do so or should he consider going elsewhere as a free agent?

“What Kemba has proved is that he had room to grow, and he is growing, and he’s only getting better,” Borrego said. “This isn’t a guy that’s just stagnated or gone in the other direction. He’s actually getting better. He is in his prime. He can lead a franchise. So for me I love having him as our point guard. I believe in him. I think our group, our organization, believes in him.”

And Walker apparently loves it in Charlotte, where he’s been all in since that rookie season, when the Hornets actually went a disastrous 7-59. But as the biggest decision of his career approaches, with Walker playing better than even he expected he ever would, he’s taking his time. This is one decision that he won’t rush.

“I think so,” Walker said of whether Charlotte is on the right path to building around him. “ I think, of course, we’re going to need a few more guys. But I think those guys have some choices to make as well.”