Kelly Oubre Jr and Richaun Holmes combined off the bench as the Phoenix Suns dominated Denver Nuggets and turned the Western Conference on its head. Oubre Jr and Holmes were responsible as the rock-bottom Suns’ reserves got the better of their Denver counterparts and recorded just their 11th win of the season.

A stunning 102-93 home success over the Western Conference’s top team saw the Suns use a 10-0 flurry late in the first quarter to take a lead they never relinquished en route to their first win over the Nuggets in three tries this season.

Nikola Jokic had 23 points and 10 rebounds for Denver, who drop to 28-13 and hold just a half-game lead over Golden State atop the West.

Holmes had a hoop and two free throws, while fellow reserves Oubre and Troy Daniels hit three-pointers in the early run that put Phoenix in charge after the game had been tied at 20-all.

Phoenix, who had lost seven of its previous eight games, went on to lead by as many as 16 in the second quarter and 18 in the third before Denver rallied in the fourth.

A three-pointer by Jamal Murray with 4:24 to go got the Nuggets to within 93-86, but Holmes countered and the Suns were able to hold on down the stretch as Oubre finished with a game-high 26 points to go with 11 rebounds for the Suns, who have now won back-to-back home games. 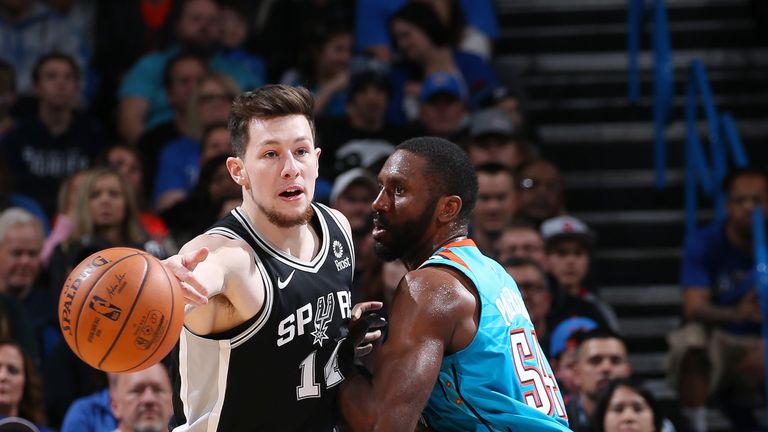 Dennis Schroder scored all 19 of his points in the second half as the Oklahoma City Thunder picked up a come-from-behind 122-112 victory over the San Antonio Spurs at home Saturday.

The win snapped a three-game losing streak for the Thunder while it was just San Antonio’s second loss in its last eight games.

After trailing by nine at halftime, the Thunder took control in the third quarter, outscoring the Spurs 35-20, Schroder scored the final seven Thunder points of the quarter to help Oklahoma City lead going into the fourth and he kept that up with a crucial steal with just more than five minutes remaining.

Schroder jumped into a passing lane, grabbed the ball and raced upcourt, passing the ball between his legs to Russell Westbrook for a layup that put the Thunder up by 12 as they closed out the victory.

Bogdanovic hit four three-pointers and Hield five as the Kings went 14 of 37 on treys overall. They also got 12 points and 12 rebounds from Willie Cauley-Stein and 11 points from Marvin Bagley III.

Kemba Walker led the Hornets with 31 points, although he left in the final minute because of an abdominal injury, while the Hornets also got 13 points from Nicolas Batum, 11 from Michael Kidd-Gilchrist and 10 from Malik Monk.

June 3, 2020, Comments Off on Coyote Sneaks Into California Backyard, Brushes Up on Its Golf Game

June 3, 2020, Comments Off on AOC rips Washington Redskins over 'Blackout Tuesday' post
We and our partners use cookies on this site to improve our service, perform analytics, personalize advertising, measure advertising performance, and remember website preferences.Ok