John Tavares knows that things won’t be easy for him on Thursday night, when he makes his first visit to the Islanders since leaving them to become a Toronto Maple Leaf.

Many Islanders fans, emotionally bruised by the departure of the longtime team captain, have vowed to be loud and relentless at Nassau Coliseum, expressing disapproval over Tavares’s decision last summer to sign as a free agent with Toronto, his hometown team.

Tavares, 28, who became the face of the Islanders after they chose him first over all in the 2009 draft, will have to find a way to cope with being cast as the villain in an arena where he typically generated cascading cheers.

“It is what it is,” Tavares said after the Maple Leafs lost to the Rangers this month at Madison Square Garden. “I will try to handle everything as best I can.”

During his time on Long Island, Tavares was active in the community, visiting schools and hospitals every season. He played hard for subpar Islander squads, making the playoffs only three times in his nine seasons with the team.

Tavares also worked to assimilate with a seemingly ever-changing cast of linemates and watched as close friends like Matt Moulson and Ryan Strome were traded by Garth Snow, the general manager from 2006 to 2018.

Tavares was playing under a team-friendly, six-year, $33 million contract before last summer, when he became an unrestricted free agent for the first time.

The Islanders could have asked Tavares to waive his no-trade clause at last year’s trade deadline to give the franchise a chance to recoup assets for him, their best player. But management and ownership chose to keep Tavares and let him reach the open market. Six teams, including the Islanders, met with Tavares before he decided to leave.

He had been the foundation of the franchise for so long, it was hard to imagine a future without him. A long-term commitment to the Islanders seemed implicit in December 2017, when Tavares was present at Belmont Park as the Islanders announced plans for their future arena on the racetrack grounds.

Tavares, who is soft-spoken, also frequently said last season that he hoped to stay with the Islanders. But he was ultimately swayed by the opportunity to return home, signing with the Maple Leafs for seven years and $77 million. 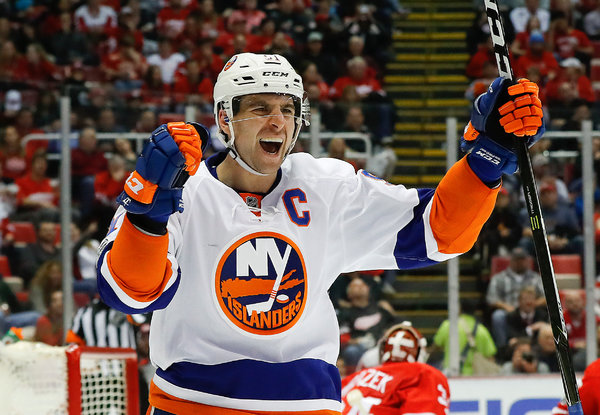 “It was tough pill to swallow for everyone,” said Anders Lee, the captain of the Islanders this season. “As teammates, we wanted him on our team. Fans wanted the same thing.”

Going into Thursday’s game, Tavares was second in scoring for the Leafs, who are strong contenders from the Atlantic Division. He had 36 goals and 32 assists through 63 games; his career high for goals in a season is 38 in 2014-15.

Without Tavares, the Islanders have become the surprise of the league, tied for the lead in the Metropolitan Division under Barry Trotz, their new coach, and almost surely heading for the playoffs for the first time in three seasons.

But on Thursday, cheering for one of the best Islanders teams in years almost certainly won’t be enough for the home fans. Through social media, some of them have promised to boo Tavares at every turn. There are concerns that the protest will go too far, leading to delay-of-game penalties.

“Nothing should be thrown onto the ice; that’s stupid and players can get hurt,” said Tom LoFaso, the leader of the Blue and Orange Army, a fan group that leads playful chants at home games. “We’d all be fine if he was honest with the team instead of for two years saying this is where I want to be forever. That’s why I and a lot of Isles fans are going to boo him.”

Tavares acknowledged that anything the fans might do would be out of his control. “I will just be myself,” he said.

“John invested everything he had into that organization,” said McDonald, 34, now captain of the Lehigh Valley Phantoms in the American Hockey League. “He is human, and of course that’s not the reaction he’s looking for. But as far as learning to deal with stuff you can’t control, I have never met someone who can handle it like John.”

The Islanders haven’t announced plans for one of the video tributes that often accompany a star player’s return to his former city. When Mark Messier came back to New York after signing with Vancouver in the summer of 1997, he was reduced to tears as images of him appeared above the Garden ice.

Tavares has never publicly complained or criticized Islanders management. He went out of his way to praise teammates and the organization even as the team sank in the standings last season.

Tavares spoke often of how much he relished playing in front of the boisterous crowds at Nassau Coliseum. The cozy arena shook in April 2015 when Tavares scored an overtime winner in the playoffs against the Washington Capitals, just as it did countless other times for the star center who netted 272 goals as an Islander.

“I loved my time as an Islander. Now I love being a Maple Leaf. It was the right fit for me,” Tavares said quietly as he headed for the team bus in Manhattan. “It was still the hardest decision I have ever made.”