ON December 18, reputations will be on the line when Tommy Fury fights YouTuber Jake Paul in the States.

The grudge match will take place at the Amalie Arena in Tampa, with both looking to settle their heated feud. 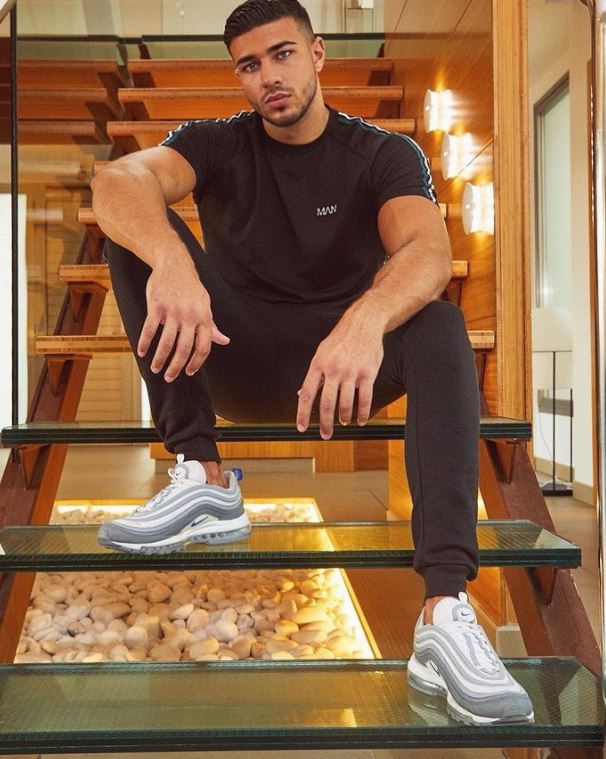 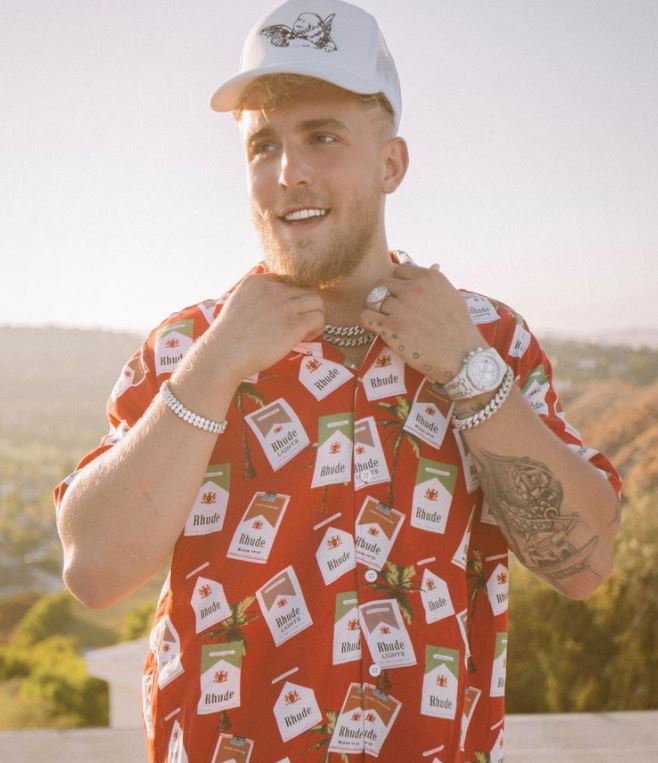 In the past year, the pair have constantly called each other out – with the bad blood bringing in Love Island beauty Molly-Mae Hague, who was dissed by the American.

Outside the ring, Tommy, 22, and Jake, 24, have enjoyed celebrity status on TV and social media, as their stock and bank balances have risen.

Here's how the fighters compare.

They coupled up together and made it to the final, before finishing runners-up. However, the country soon fell in love with them.

Molly-Mae has since gone on to become a creative director for online clothing giants PrettyLittleThing, where she is said to have signed a £500,000 contract to produce her own line.

The 5ft 10in stunner has since been seen ringside, most recently taking in Paul's fight against Tyron Woodley.

Like Fury and Hague, Rose got famous through reality TV – appearing on MTV’s dating show Are You the One?

She also famously flashed her breasts on live TV during the 2019 MLB World Series. 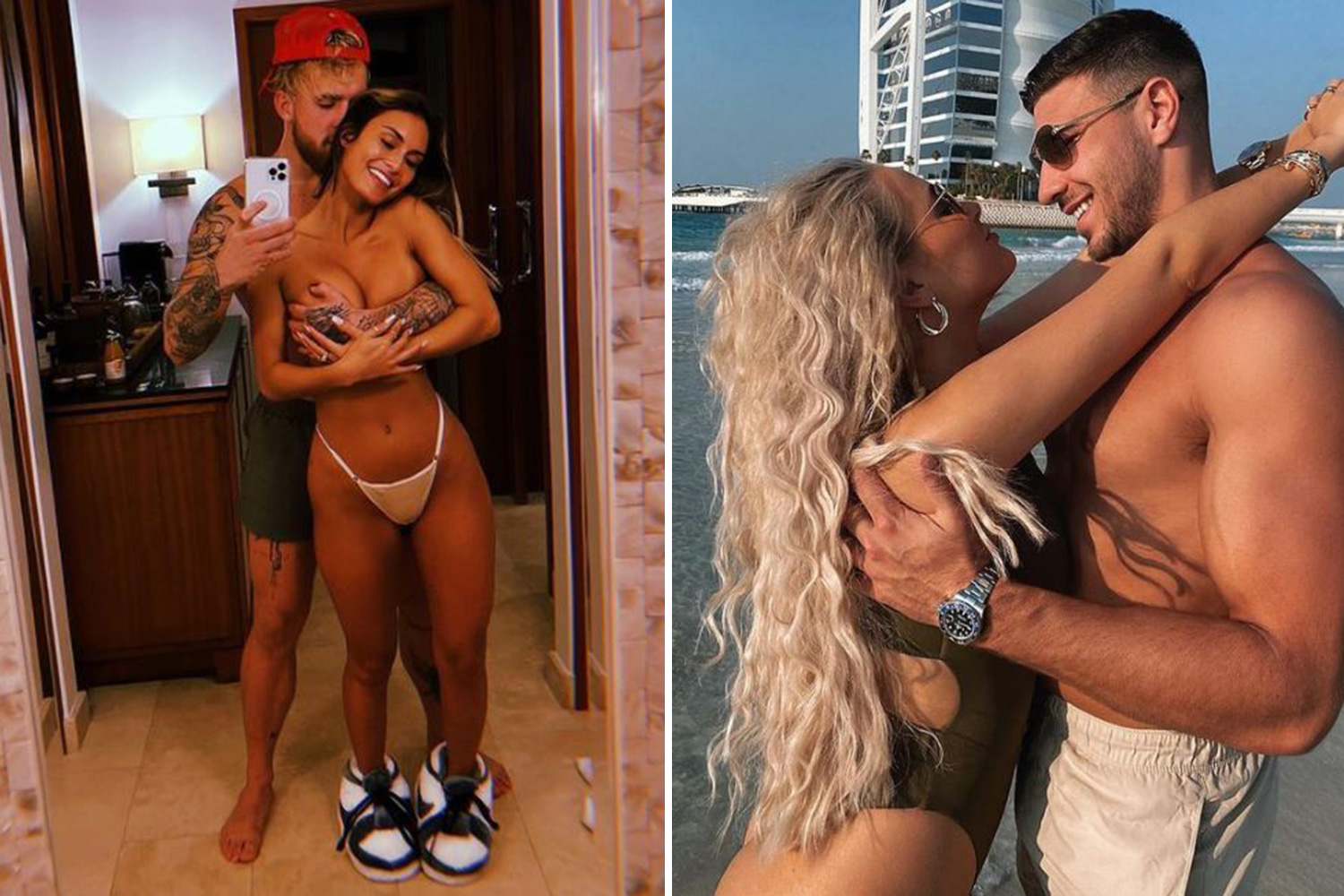 Paul has a fine collection of motors, including a  £165k Lamborghini Huracan and a custom-wrapped £81k Tesla.

But, it's his love of British luxury car Rolls-Royce that he shares something in common with his fierce rival.

His custom Phantom would've set him back somewhere north of £360,000.

Tommy also posed with a Phantom, when he was in Las Vegas. But that doesn't appear to be his motor.

Back in the summer, he did splash £120,000 on a new BMW i8 Hybrid supercar – just weeks after passing his driving test. 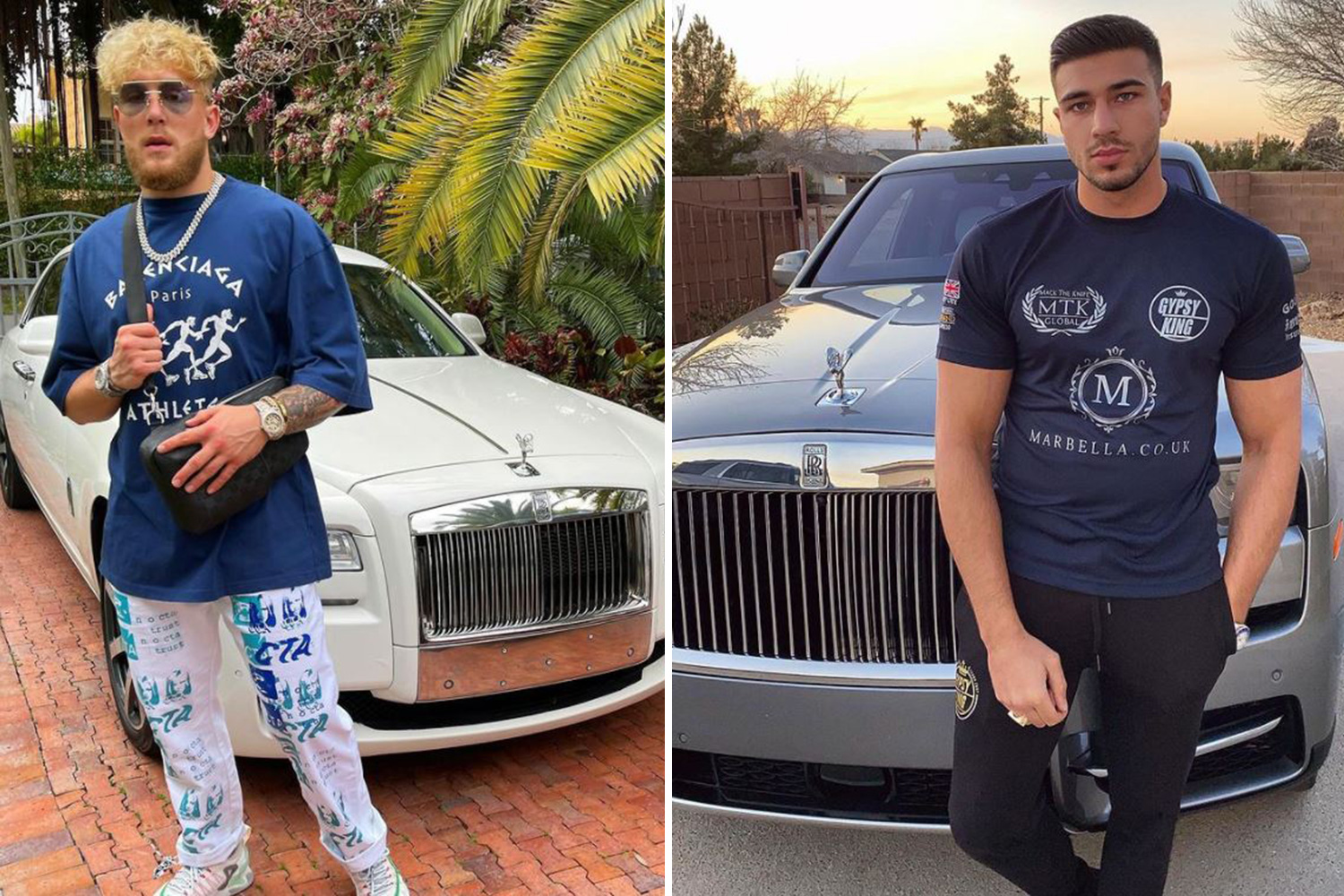 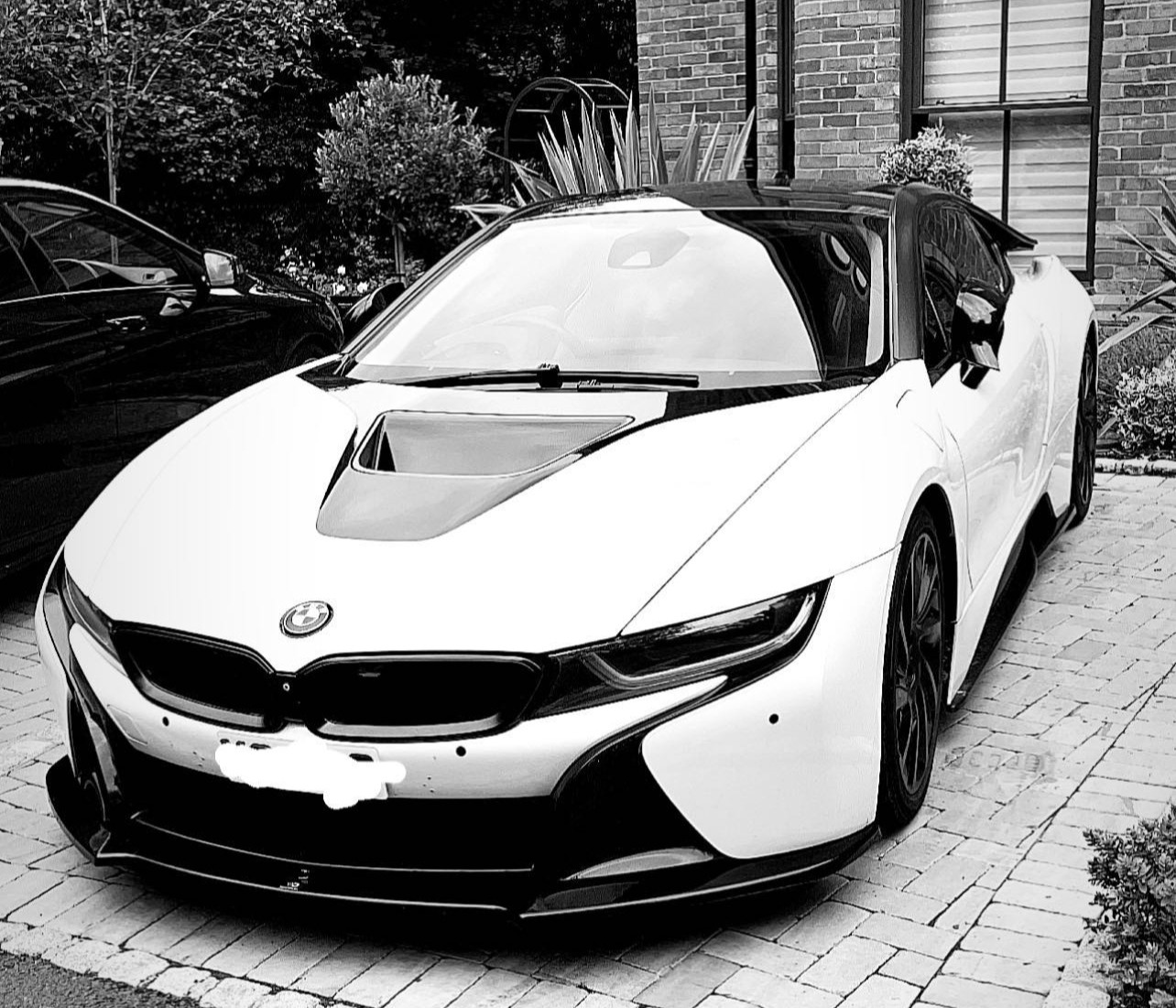 Fury has been seen wearing a fancy Rolex Yachtmaster II worth around £20,000.

However, at the end of October Tommy and Molly-Mae were robbed of belongings worth a reported £800,000 from their Manchester flat.

Last summer, Jake Paul trolled Conor McGregor with a special diamond necklace, said to have cost around £80,000, that featured an image of the UFC star knocked out on the canvas.

Paul loves jewellery, and is said to have a £1million collection. 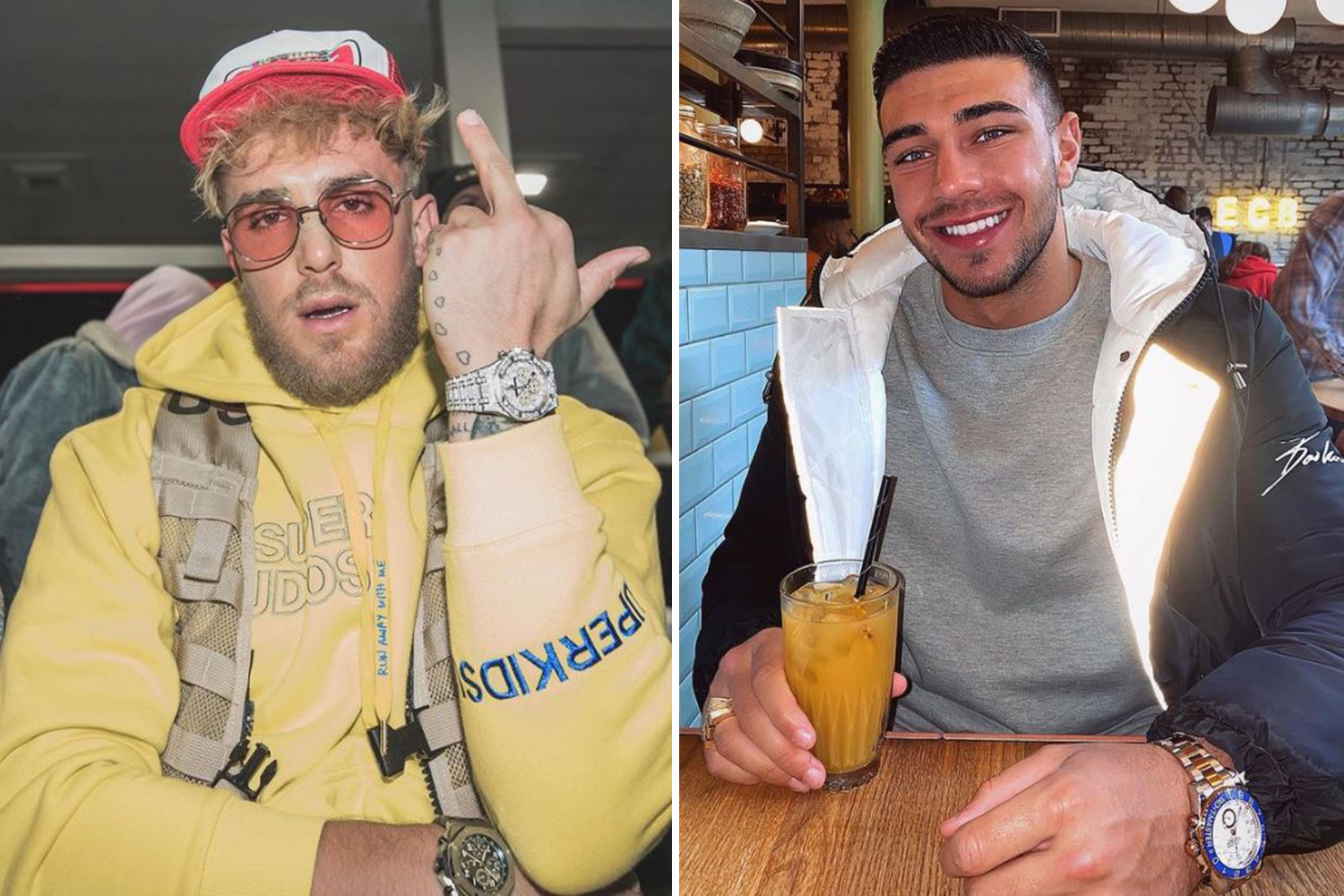 Another thing Fury and Paul share is famous brothers.

Tommy's elder sibling is WBC heavyweight champion Tyson Fury. The pair have a tight bond, with the younger Fury supporting his brother's career and often seen ringside at his fights.

But Tyson has said he will "disown" Tommy, if he loses to Paul. He also joked he will have to change his name to 'Fumbles' as a forfeit.

Jake has a love/hate relationship with Logan Paul.

He has called Logan, who also pursued a career in boxing, a "fake fighter".

Interestingly, Logan has called out Tyson for an MMA fight, claiming "the bigger they are, the harder they fall." 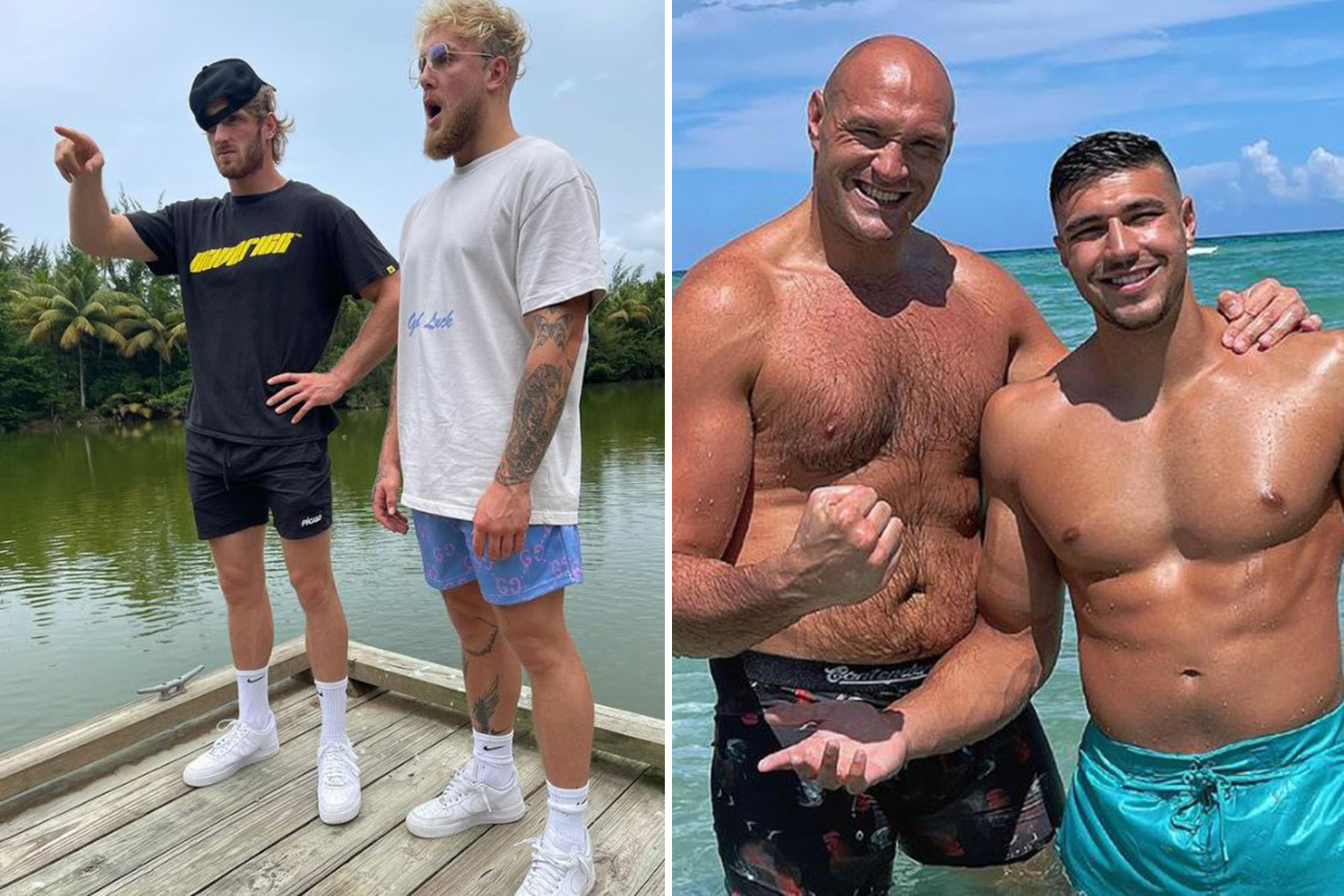 He shared an image of Fury standing at the desk of budget Spirit Airlines and joked about his rival's earning power.

"This is what happens when you turn down a $1m pay day," Jake captioned a social media post sharing the photo.

Although, Tommy has been known to travel by private jet with Tyson.

Jake, who is said to be worth £13million, is often spotted taking private jets.

He has taken his mates to Ibiza and boxing events, galavanting around the globe. 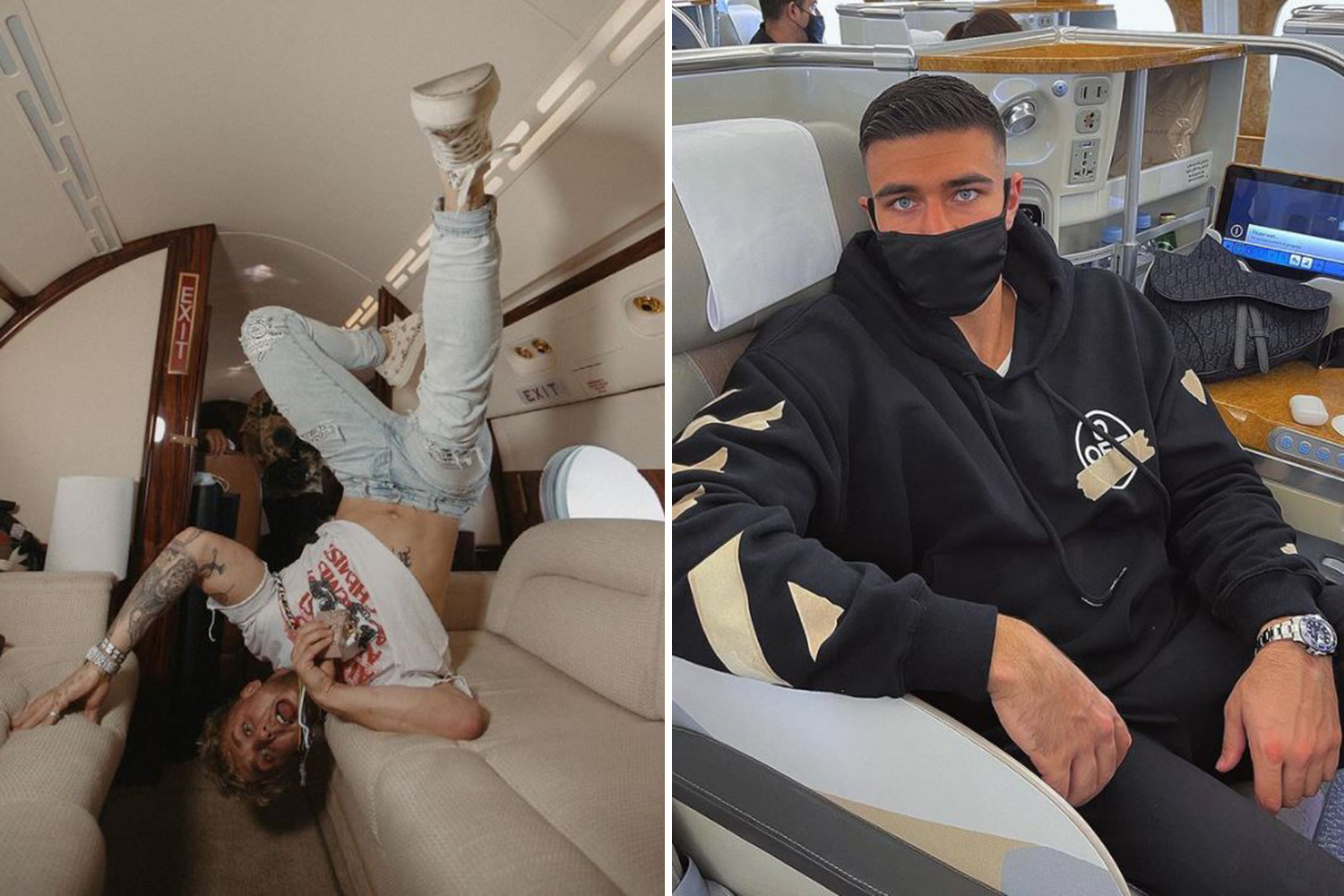 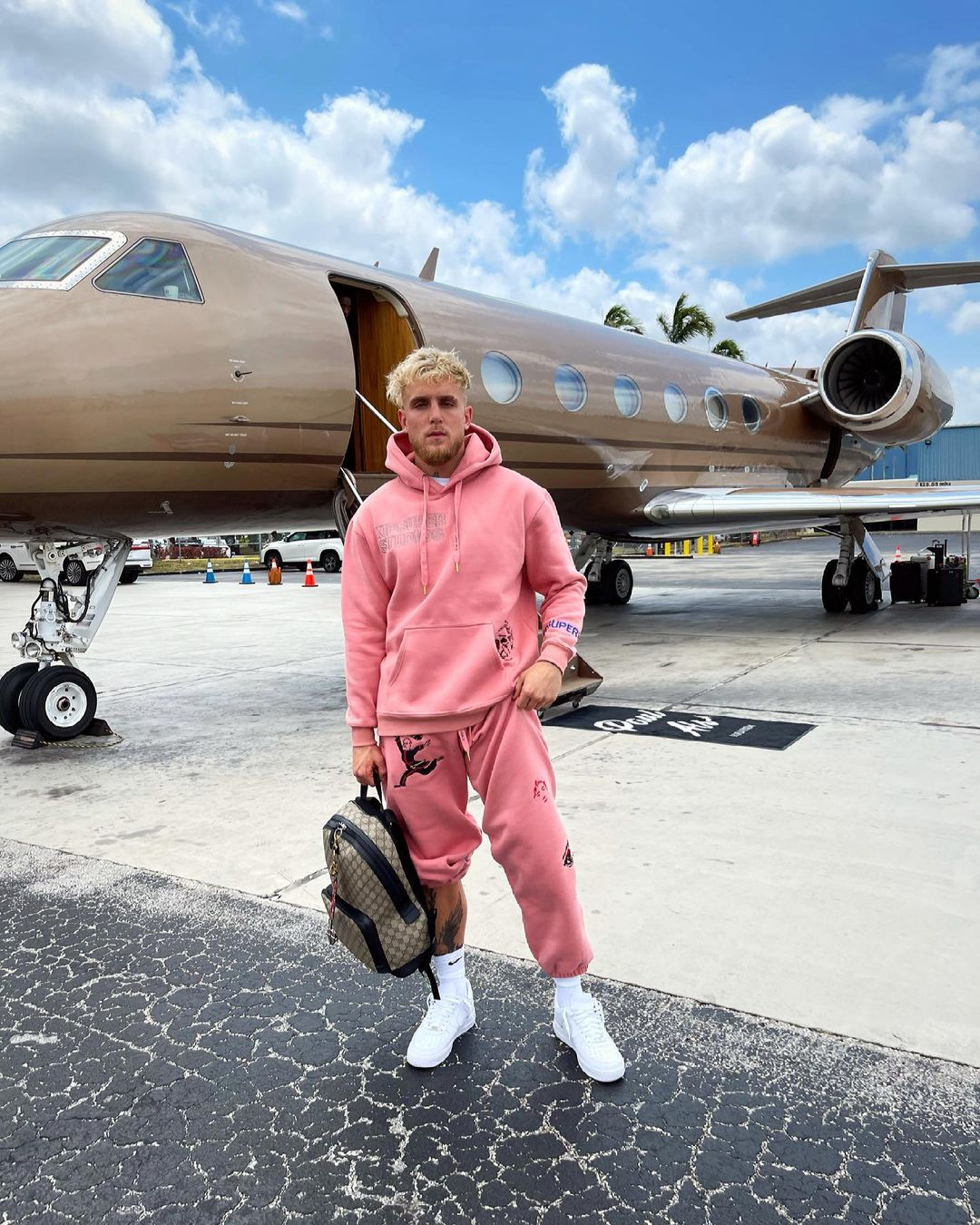 When it comes to training, Fury and Paul do not mess around.

Paul had training camps in Big Bear California, Las Vegas and Miami for his first three fights, and moved to Puerto Rico ahead of the clash with Woodley to concentrate on his boxing.

He once shared an amazing image that would befit a world's strongest man contest – pulling a fire engine.

A bit more old school, Fury opts for chains and heavy lifting when he's bulking up and gets help from his older bro.

While his dad John Fury revealed: "He don’t lift weights. All this is press-ups, sit-ups, pull-ups and road work. 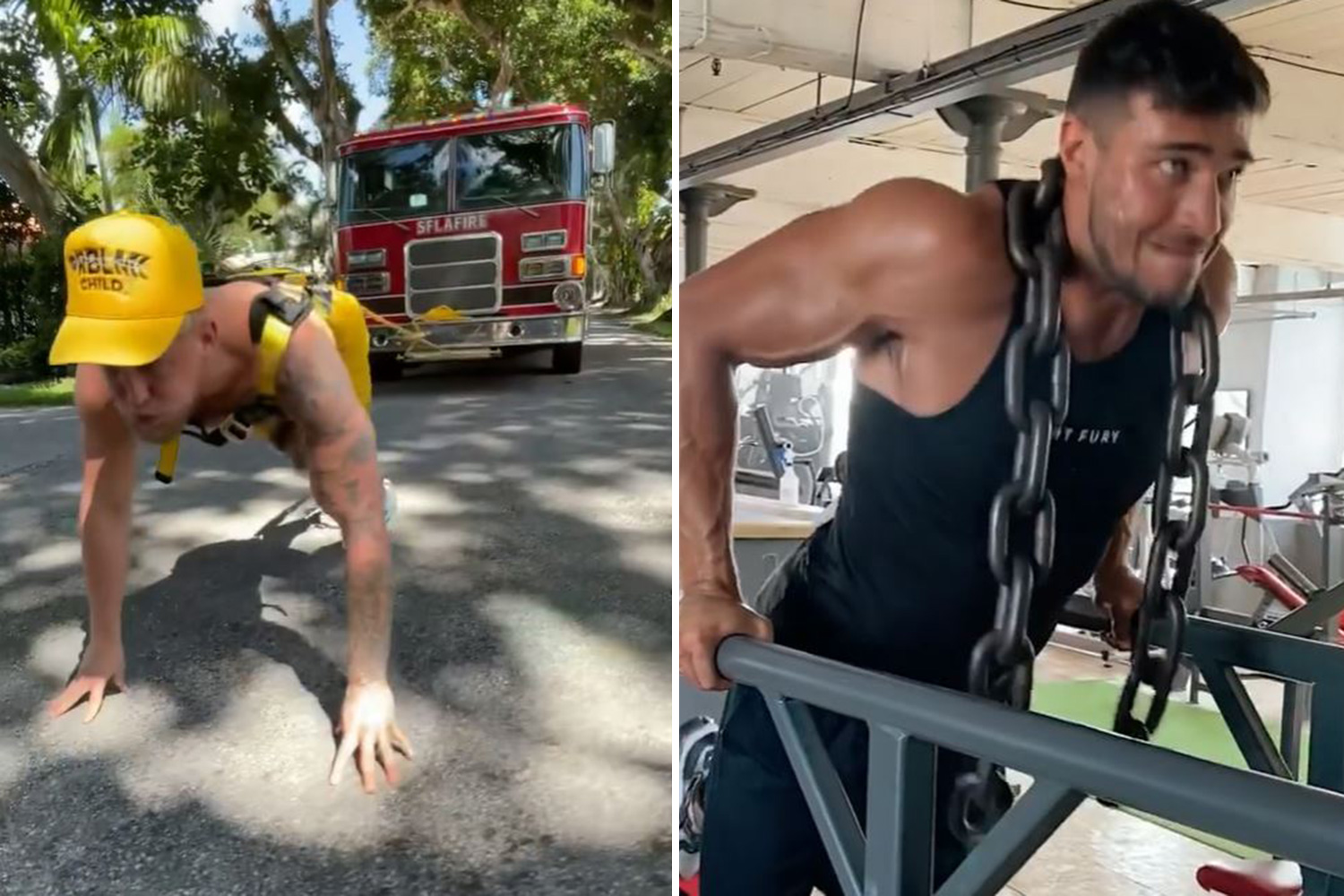 The Halloween festivities allow for celebrities to dress up in frightful outfiits.

And Paul and Fury were no different, flooding their Instagram accounts with their scary costumes for the recent celebration of all things ghoulish.

Tommy and Molly-Mae stayed close to his sport – with the former as a bloodied boxer, while the social media influencer went as a ring girl, also splattered in fake blood.

Jake hilariously aimed a dig at Dana White with his costume – dressed as the UFC chief holding a bag of '(UFC) Unlimited Free Cocaine'.

While his missus Julia was in a glam leopard print dress.

The look was inspired by a forum post that read: "News – Brazilian Stripper Taped Dana White Banging her, Boyfriend…"

Who do you think has a better lifestyle? 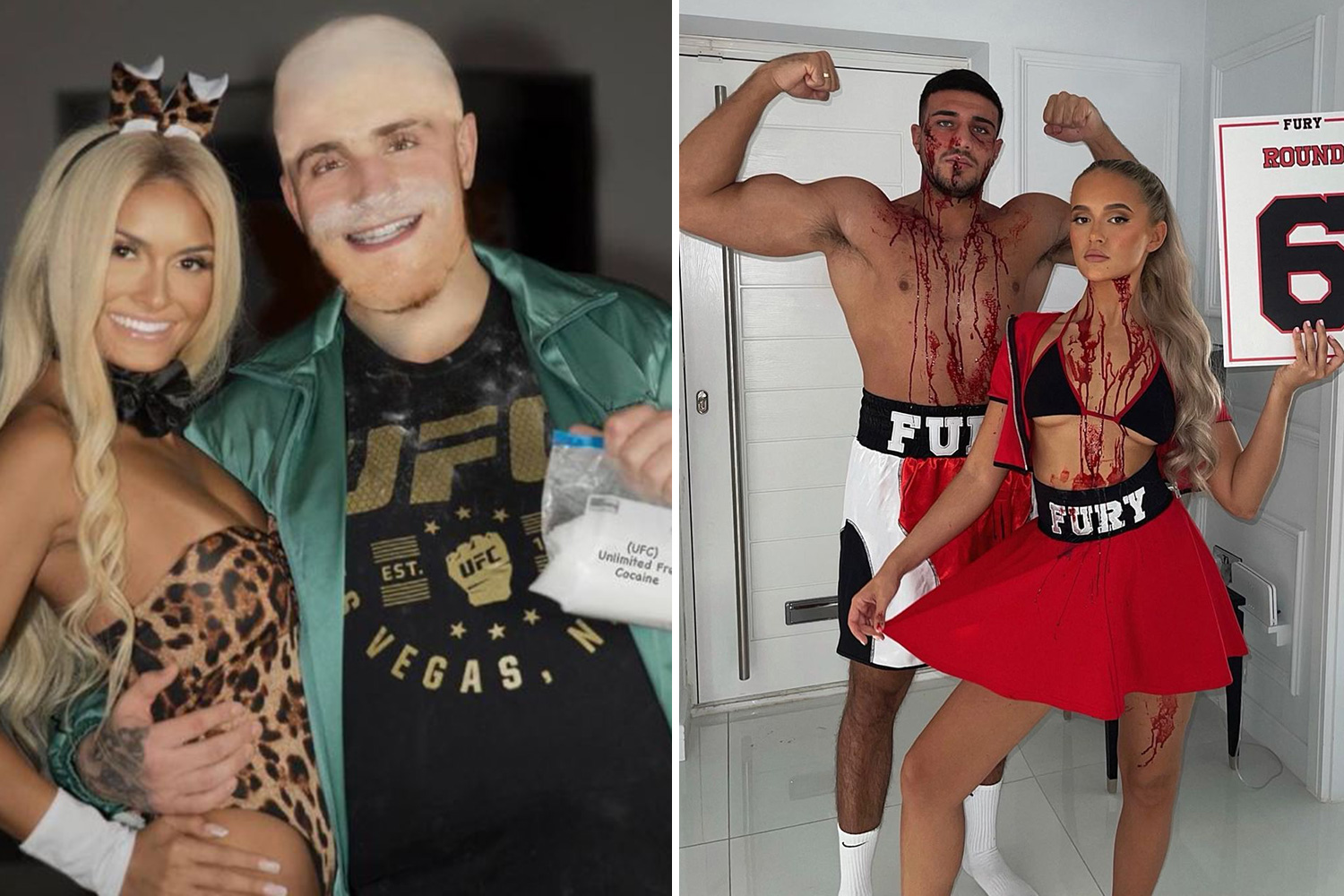