IT'S a real mixed bag this weekend, but one I look forward to every time!

The jumping at Wincanton is centred on the Badger Beers Trophy – where Paul Nicholls has dominated – while the Flat draws to a close up at Doncaster. 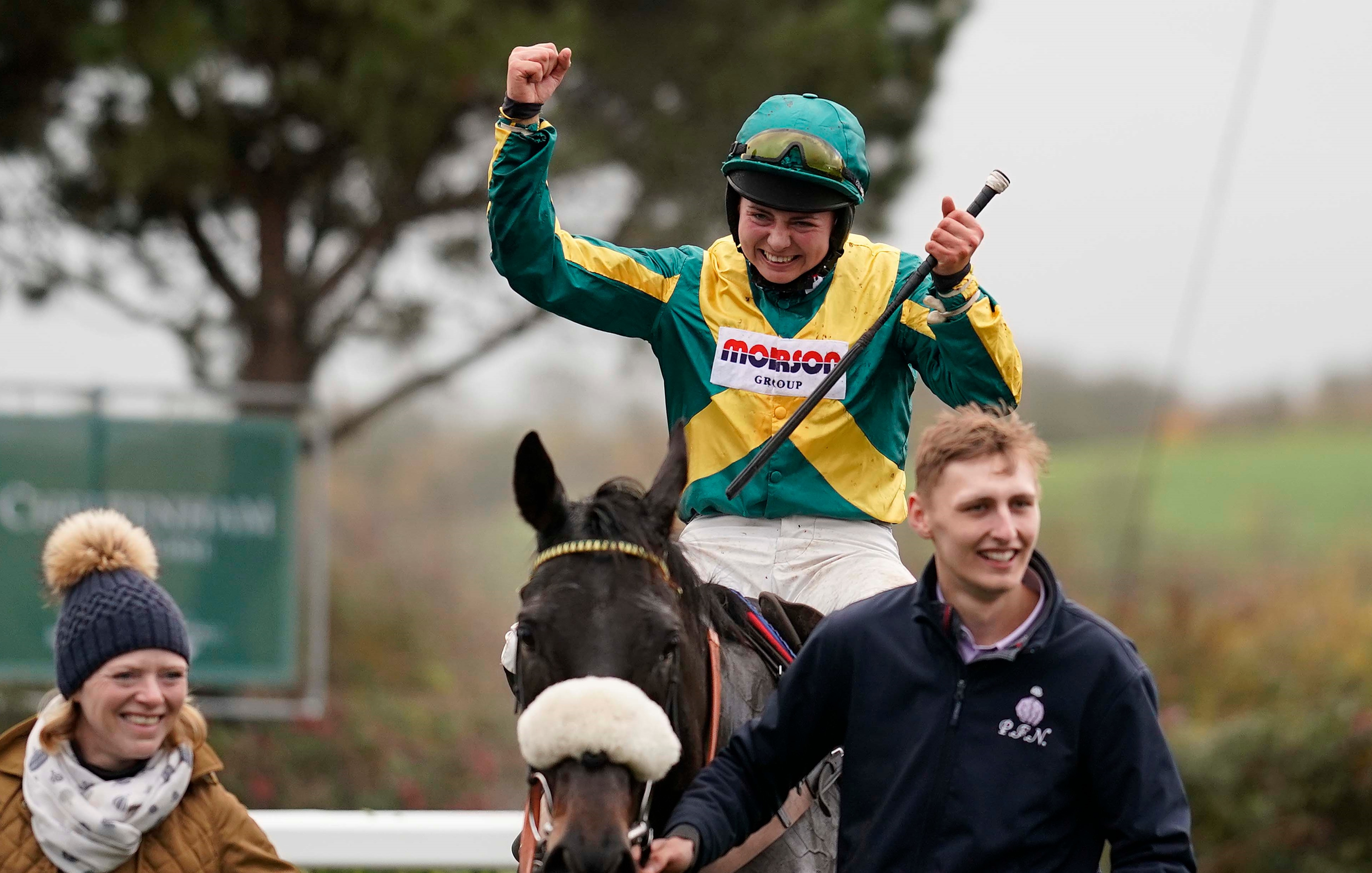 Here's all you need to know about another big Saturday.

What TV channel is ITV racing on?

The action won't be on the usual ITV main channel.

This time it will be on ITV 4.

What time will ITV racing be on?

The coverage gets underway from 1.15pm and finishes at 4pm.

What are the tips for the ITV7 and what races will be shown?

Read on below to see all of top tipster Templegate's tips for the races on TV.

BRANDO almost pulled off an 80-1 shock in Ascot’s Group 1 Champions Sprint last time and can gain a deserved win. This trip and ground are ideal so he should be too good on this drop in class.

Gulliver won a hot handicap on the Knavesmire last month and will be a threat from off the pace.

Ostilio has left the Crisfords since winning in this class at Redcar and can’t be dismissed.

Son Of Rest has class and could be a threat if anything like his old self.

ICE SPRITE loves cut in the ground and will get it today.  She has been consistent all season with two wins and a couple of places in good company. William Haggas raises her sights here but she looks open to lots of improvement and stays well.

Freyja has been in superb form with back-to-back wins at Newmarket in testing conditions. She battled well to take a Listed contest latest and will be right there.

Anna Nerium likes to get her toe in and ran well in a Group 3 at HQ last month. The drop to this level will help. Chamade is better than we saw at York while Trefoil has more to offer too.

T&Cs: New customer offer. Place a min 5 bet (or 2.5 e/w), at minimum odds of 1/5 (1.2) on the 'Win or E/W' market in the 17:02 Breeders' Cup (Keeneland), Saturday, November 7th. After the qualifying bet has been settled, you'll get a £5 free bet for each remaining Breeders' Cup race + 10 Sports Free Bet. Deposits using Credit/Debit cards or Apple Pay only. Free bets are only valid for the specified race and are awarded when the qualifying bet has been settled. Free bet stakes not returned with winnings. T&Cs apply. 18+ Begambleaware.org

SAM COOKE is a potential big improver who went close in a hot race at Ascot last time out in July. He sees out this trip well and comes from a handy high draw. His best form has come when fresh so his layoff isn’t a worry.

Kingbrook landed a hot HQ handicap last month and can cope with a 6lb rise. This trip is ideal and he has more to offer as a lightly raced three-year-old.

Veteran Euchen Glen is finishing the season in style and has won a pair of Group 3s heading here. Trip and track suit and he can go close off top weight.

Surrey Pride is another who looks capable of better and likes some cut. Aasheq was unlucky at Redcar latest and has a fair weight under Paul Hanagan.

CILL ANNA was a real star last season as she picked up three hurdles wins on the spin. She finished the campaign with a battling Listed success at Doncaster when she saw out three miles well. Trainer Paul Nicholls will have her tuned up for this return at a track she likes.

He also runs Eglantine Du Seuil who has arrived from Willie Mullins in Ireland. She was last seen midfield in the Coral Cup at Cheltenham and has had a wind op since. She has lots of weight but is one to watch.

Sunrise Ruby has won both hurdles starts this season in style. This is tougher than her Kempton success last month but she’s on the upgrade. It’s Probably Me looked promising last term and had plenty in hand when winning at Donny in February. She makes her handicap debut from an eyecatching mark.

Crossgalesfamegame has been consistent and is back from a long break after going close at Newbury. More rain would help her chances. Molly Ollys Wishes has been going well at minor level and can improve.

GRAND SANCY can land a hat-trick of wins for Paul Nicholls. He was a Grade 2 winner over hurdles and took a little time to get the hang of chasing last season when he was pitched into the deep end of races like the Scilly Isles at Kempton. He got off the mark in calmer waters at Fontwell in February and stepped up to land a Listed win at Chepstow on comeback last month. His jumping was really good as he landed a 13-length success. This is a hike in class on paper but only two rivals have turned up so he should handle it.

Ga Law doesn’t have the same experience as the jolly but he has done nothing wrong on his two spins over fences. He kicked off with an easy Fontwell win and stepped into handicap company for an impressive success at Exeter. He’ll make sure Grand Sancy doesn’t have things all his own way.

Hurricane Harvey isn’t out of this either. He stayed on strongly to score at Uttoxeter on chase debut latest.

T&Cs: New customer offer. Place a min 5 bet (or 2.5 e/w), at minimum odds of 1/5 (1.2) on the 'Win or E/W' market in the 17:02 Breeders' Cup (Keeneland), Saturday, November 7th. After the qualifying bet has been settled, you'll get a £5 free bet for each remaining Breeders' Cup race + 10 Sports Free Bet. Deposits using Credit/Debit cards or Apple Pay only. Free bets are only valid for the specified race and are awarded when the qualifying bet has been settled. Free bet stakes not returned with winnings. T&Cs apply. 18+ Begambleaware.org

SCEAU ROYAL was a revelation back over hurdles at Ffos Las three weeks ago when winning the Welsh Champion Hurdle at a canter. He seems to have fallen out of love with chasing but looked all over a Grade 1 performer again tackling the smaller obstacles. He can repeat the feat at track he likes.

Solo can win the battle of the Paul Nicholls pair with Diego Du Charmil. He was fancied for the Triumph Hurdle at Cheltenham on the back of his impressive Grade 2 Adonis win at Kempton in February only to run poorly. That earned him a gelding op which may get him back on an even keel. Diego Du Charmil was a fair third on comeback and is another who has scaled the heights over the bigger obstacles.

Master Debonair won an Ascot Grade 2 in December before disappointing back there in February. This isn’t the easiest of comebacks but his best form would give him a squeak.

Teqany is a fair handicapper but this is a lot tougher.

PRESENT MAN loves this race having won it in 2017 and 2018 before getting stuck in the mud 12 months ago. He’s still only ten and showed his wellbeing when battling to score on comeback at Chepstow last month. Bryony Frost gets on well with him and he’s only 2lb higher than his last success in this contest.

Stablemate Danny Whizzbang has had a wind op since heavy ground was his undoing at Ascot in February. He’s got a Grade 3 on his CV and it’s still early days over fences. He could be ahead of his mark on this handicap debut.

Potterman is the most likely to spoil the Paul Nicholls party. He is a nice handicapper who returned with a second at Chepstow 28 days ago. The form of that race looks decent and Alan King’s runner is a threat.

El Presente comes from in-form Kim Bailey and he showed good heart to win at Hereford latest on the back of an Exeter success. He stays well and can improve. Some Chaos scored well at Kelso and has place claims at a track that suits.

THOMAS DARBY can edge a tight contest. He was second in last year’s Supreme Novices’ Hurdle before going over fences where he didn’t look at home. He landed a decent Ascot handicap before heavy ground didn’t suit at Fontwell. He has run well fresh before and has more to offer. Call Me Lord was last seen finishing tenth in the Champion Hurdle and he should cope with this longer trip. He has plenty of quality and should be fit enough to perform. Ch’tibello has had a breathing op since his second in the Kingwell at Kempton. He won the County Hurdle last year and almost landed a Grade 1 on his last trip to Aintree.