ecember’s announcement that breakdancing will be an event at the 2024 Olympic Games brought with it a slurry of negativity.

Amid the “how do you do fellow kids” jokes were more serious, deeper criticism of the International Olympic Committee, with the suggestion that indulging such cheap thrills would bring the very fabric of the Olympics into disrepute. With the presence of BMX, surfing and also now skateboarding at the expense of more traditional sports, here was the straw to break the camel’s back.

Those on the periphery lined up to take their best shots. “It’s sort of making a mockery of what the Olympics is,” said Australian Michelle Martin on behalf of her peripheral sport, squash.  “When you look at what it all used to stand for, the Olympics, it definitely fits in the category. What does the Olympics stand for these days, I don’t really know.”

The reasons for inclusion given by IOC president Thomas Bach were to strive towards a “more gender-balanced, more youthful and more urban” Games. But you do not need to look too deep to understand why a half-a-billion-dollar industry that united all four corners of the globe was waved through so emphatically.

Which prompts another question: what can breaking gain from the Olympics?

On the face of it, such a high-profile event is at odds with the very essence of breaking: emerging from the streets as an artform that emboldens everyman and everywoman to the b-boy and b-girl inside of them. Those familiar with hip-hop will be well aware of breaking, both emerging hand-in-hand to rise out of the Bronx to global acclaim.

As such, the tenets of hip hop and breaking are one and the same: a freedom of expression rooted in humble beginnings, where all you had at your disposal was your mind and body to put across your message. Power lay within the self.

But as the world around them changed, those principles became the focus of a cultural civil war within both entities – the result of something rooted in humble beginnings growing so exponentially.

When it comes to breaking, Olympic inclusion has further opened this rift further. A split accurately represented by the simple monikers of new school versus old school.

“There’s a lot of debate in the B-boy scene,” says Sunni Brummitt, 23, who has been a “professional” outright since the age of 21.

Born in Malaysia and raised in Gloucester, Sunni is a kid out of the UK scene, which was given a shot in the arm by the success of the Diversity troupe, who won the third edition of Britain’s Got Talent in 2009. The advent of YouTube in 2005 also helped spread the ways of breaking more broadly, far beyond a fanbase that was thriving off-the-grid.

“A lot of people are always worried about us losing authenticity or compromising on the art and pushing to the sport.

“To me the Olympics is just putting a new face to an age-old discussion between generations that happens in any kind of artistic form, not just breaking. You have the purists; you have the people that have a certain nostalgic tie that they can’t get over. You have people that want to exploit it that don’t care about it. Because it’s subjective and it’s art, sometimes people can’t see that it’s bigger than that.”

It was this artistic resistance that greeted Red Bull when they decided to invest in breaking, starting with their sponsorship of Lords of the Floor in 2001. That led to BC One in 2004 which is now the biggest breakdancing meet on the circuit.

Red Bull have several breakers in their stable, of which Sunni is one of them. Without their backing, a sustainable full-time career was only available to a select few. Even now, of the estimated 30 million dancers across the world, only around 20 per cent make a viable living from breaking.

Within the 80 per cent is an unquantifiable number satisfied with their lot who feel the Olympics is another big step towards the art losing its soul. Taking the coin and dropping some values along the way. Invariably, these gatekeepers are the loudest on the scene. And, according to Sunni, some of the more disingenuous.

“There’s this whole thing of breaking being from the streets and it being urban. But a lot of people who push that narrative aren’t from them places, you know?” 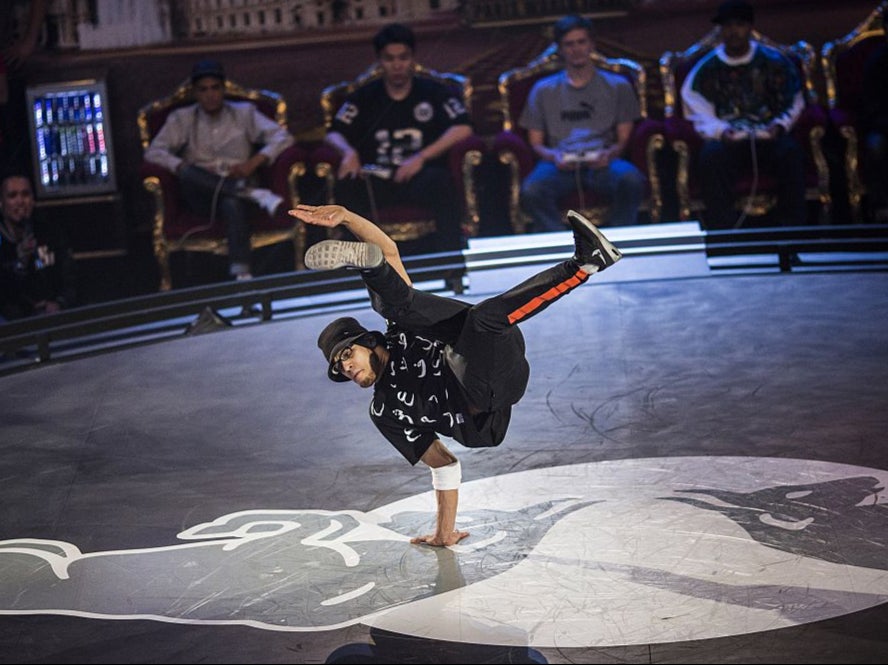 “B-boying was from the streets because it had to be. But if they had the chance to have Olympic athletes, trainers and nutritionist – do you think these street kids would say no, I’m happy on the concrete? We came from a place that was hard and we made best do… but we’re able for so much more now, and to keep us tied down to that place is so detrimental to the whole purpose of what this came about from.”

The “streets” as a dog-whistle concept plays an interesting part in all this because breaking from its first instances was the tool of the disruptor, who reacted to being marginalised by creating their own spaces to thrive. Though that space has increased, the perception that it is filled by hoodlums and troublemakers purveys to this day. And there is an inkling within the community that the platform of a Games could go some way to removing those racially and socially dismissive tags.

“I see this also as something that means we can change the culture of breaking,” says Liloi, a breaker for 24 years and one of three to win Red Bull’s BC One competition twice. Growing up in Lyon as the son of Algerian immigrants, the rising prominence of his work alongside increased tensions towards minorities in France has given him a sight of a bigger picture.

“Think of the vision of each country. You look at the UK and France, breaking is seen as more of a social thing for people like ‘us’, you know what I mean? People see hip hop as it’s people from the ghetto, immigrants.

“But if you look at breaking in Korea and Japan, those countries where it’s not about ‘immigrants’ or ‘delinquents’, all this stuff – you see a different attitude. If I was born in these countries, I would be a superstar. World champ, blah blah blah. In France, I’m still the guy from the hood that’s dancing to rap.

“It’s good to have all the different levels from other countries in one world, that is the Olympics. For our countries, maybe they will say ‘oh ok, you’ve got these Olympic medals’. This word changes everything.” 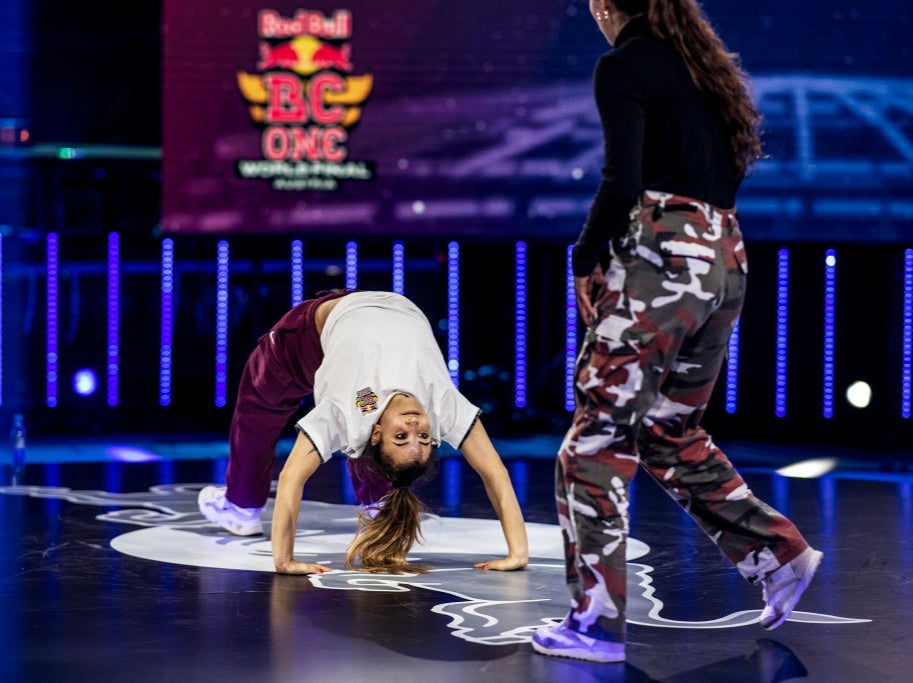 Lilou is also of the opinion that an Olympic audience is a key part of all this. That by coming out from the comfort of their own ecosystem, even only for a fortnight, they may tug on the enthusiasm of many oblivious to their world.

There is something in that. Viewers of the Olympics tend to be of an open mind, willing to sit and indulge in sports they know little about. For many of us, it’s a once-every-four-year refresher of what a double-twisting half-pike actually looks like. And for an event that will be physically striking and vibrant, from the music to the one-on-one battle that gives it an air of combat, the pull for the neutral is clear.

There is also a sense it will lead to acceptance a little closer to home. Vanessa Marina is a b-girl who grew up in Portugal and moved to the UK to become a contemporary dancer before the specifics of breaking took hold at the relatively late age of 20. She won the Red Bull UK BC Cypher competition in 2019 and made the final battle in 2020.

Her parents, though, were unsure of her pursuit. Not just because of the uncertainty around the craft, which she supplements with teaching workshops, but the nature of the work. “My parents used to joke I was cleaning the floors of the Underground,” says Marina. “We still have this kind of view, that it is not so serious. I think we can reach the people will that mindset. I don’t have an interest in gymnastics, but I make sure to watch it every time it’s on the Olympics, you know?”

Beyond that horizon is another worry. What happens when a taste of the mainstream leads to further riches? Or when others enter the marketplace and demand changes that their money can (and will) buy? Even the ranking system employed for the Games, will that now become the norm? “That’s another thing,” says Sunni. ”I think it boils down to ownership and exclusivity. Also, people thinking, ‘yo, if it’s in the Olympics I’m not going to look cool’.”

The duty to keep breaking as it is, Silou believes, is on the individuals rather than the collective.

“We have these discussions with pioneers about all this. If the scene we take care of our essence and our culture, breaking will only have good things. Put out the Olympic logo from your mind. It will be two dancers face-to-face. Those dancers are from our scene. The people who will be judging, it will be from the scene. The DJ, it will be a DJ from our scene. So bring the same people and put them in a small room on the floor, it’s the same thing. Just the logo on the floor will change.”

Neither will be dragged down by the other. And you could argue further that to attribute gravitas in line with social construct is to miss the point entirely. An institution seeking forward momentum has aligned with a movement that has been doing just fine. The Olympics needs breaking more than breaking needs the Olympics.