PARIS — Roland Garros came alive Wednesday in so many ways.

As the French government eased coronavirus-related restrictions, allowing some 5,000 fans to fill Philippe Chatrier Court with rousing chants and sharp Panama hats, it seemed fitting that this would be the day that set up a match that has been anticipated for nearly two weeks.

Rafael Nadal and Novak Djokovic will meet in a French Open semifinal on Friday. Both won gutty matches on Wednesday that were filled with tension, noise and surges of momentum in every direction.

Their semifinal match will be the latest showdown in an epic rivalry and the second time in less than a month that they will face each other on red clay, Nadal’s favorite surface. Djokovic, however, gave him all he could manage in their recent three-set clay-court match in the final of Italian Open, which Nadal won for the 10th time.

“It is going to be a special match with a lot of crowd, just like it was today,” said Diego Schwartzman of Argentina, who battled valiantly against Nadal on Wednesday only to fall in four sets. “Everyone wants to see that.”

They also wanted to see the end of Djokovic’s quarterfinal match with Matteo Berrettini of Italy. But an 11 p.m. curfew intervened. On a changeover at 10:54 local time, with Djokovic leading by a set and up by 3-2 in the fourth, the players headed for the locker room as security workers cleared the crowd, which was about five times larger than on any previous day and had spent the better part of an hour helping to lift Berrettini from a two-set hole.

Virtually the same series of events had unfolded during a Djokovic match at the Australian Open in February. Just as then, there was howling and plenty of dawdling to the exits on Wednesday. But after about 15 minutes, the players returned to an empty stadium to complete the business of the night.

“Very difficult conditions,” a spent Djokovic said when it was over.

Now comes the hardest part. Djokovic holds the edge against Nadal, 29-28, though Nadal is far superior on clay, with a 19-7 record that currently looks even more imposing. It’s heating up in Paris, baking the clay and making the ball fly just the way Nadal likes. 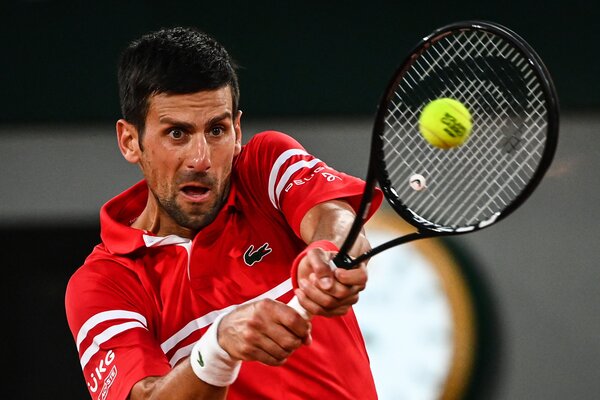 Djokovic said playing Nadal at the French Open was unlike anything else in the sport.

“It’s the biggest challenge you can have playing against Nadal on this court,” he said. “Each time we face each other, there is that extra tension and expectation. The vibes are different walking on the court with him.”

And yet, because of how players are seeded at Grand Slam tournaments, strictly by the current ranking, the matchup comes in the semifinal, one round before pretty much anyone with knowledge of the sport believed that Nadal, the reigning champion, the No. 3 seed and a 13-time winner of this event, should play Djokovic, the world No. 1.

But Nadal skipped the 2020 United States Open because of concerns about the pandemic, lost in the quarterfinals of the Australian Open and played a limited schedule after that tournament, allowing Daniil Medvedev to grab the second spot in the world rankings.

“That’s a big difference,” Nadal said Wednesday of meeting Djokovic in a semifinal instead of the final. “The winner of that match needs to keep going, and there remains a lot of work to do to try to achieve the final goal here.”

Nadal had to put in plenty of work Wednesday to secure his semifinal spot. For a little while, with an intense, late afternoon sun making the conditions deceptively taxing, Schwartzman had Nadal on the ropes.

A beguiling player who has gotten the most out of a body that is just barely over five-and-a-half feet tall, Schwartzman is a defender of the first order. What he lacks in leverage and power, he makes up for by having more tricks and spins in his strings than nearly any other player on the tour. His topspin lob, which somehow always seems to land within inches of the baseline, is as good as it gets.

He has done one of the hardest things in the sport. He beat Nadal on red clay at the Italian Open last year. He is an extremely popular player in the locker room, a figure of fascination among peers who are generally at least a half-foot taller than he is and who know firsthand how difficult he can be to play, especially on clay. Schwartzman is fearless, and he came to fight Wednesday.

Down a set, he battled to stay in the match, and had a Roland Garros crowd — which treats Nadal as a beloved adopted son — chanting his name. He didn’t disappoint, unleashing his powerful forehand, breaking Nadal three times in the first two sets and shaking his confidence. By the end of the second set, Nadal was sending weak backhands to the middle of the court for Schwartzman to tee off on and repeatedly failing to put away overheads that he usually bounces off the court.

Ultimately, though, no part of Schwartzman’s game is better than Nadal’s, with the possible exception of that topspin lob.

Down by 3-4 in the third set, Nadal suddenly seemed to remember where he was and what he has accomplished here. He reeled off wins in the next nine games, finishing the match in a manageable 2 hours 45 minutes. In the final set, he won 25 of 30 points.

“At the end, he’s Rafa and he’s always finding the way,” Schwartzman said.

After Nadal was done, it was Djokovic’s turn to hold up his end of the deal.

At first, Djokovic was far more clinical than he had been in his fourth-round match against another Italian, Lorenzo Musetti, who took the first two sets off Djokovic.

With arguably the best return the game has ever seen, Djokovic broke Berrettini’s usually troublesome serve early in the first two sets and gave Berrettini few chances to break his.

Djokovic has lost after being up two sets to none just once in his career. But with no room for error, Berrettini found the groove on his serve and had Djokovic lunging just to get the rim of his racket on the ball. Under pressure, Djokovic fumbled away a chance to serve out the third-set tiebreaker. Then, with the stadium empty and his anger boiling over, Djokovic outfought Berrettini to barely prevail in the fourth, screaming like a cave man when Berrettini’s final shot hit the middle of the net.

Djokovic has seen versions of this movie before. In October, he entered the French Open final against Nadal with as good a chance as ever against a player who had never lost the ultimate match at Roland Garros. He appeared in form, and the shift of the tournament to the fall because of the pandemic meant cool playing conditions that deadened the balls, preventing them from jumping into Nadal’s preferred strike zone.

Goran Ivanisevic, the 2001 Wimbledon champion and Djokovic’s coach, said that loss had staggered Djokovic, especially after his disqualification from the United States Open in September, when he inadvertently swatted a ball into a line judge’s throat.

The win gave Nadal his 20th Grand Slam title, tying him with Roger Federer for the most in the history of the men’s game. Djokovic pulled to within two of them in February, when he won his ninth Australian Open championship.

Now he and Nadal are meeting with only a berth in Sunday’s final on the line, even if it may not really feel that way. Neither of the two other semifinalists, Stefanos Tsitsipas and Alexander Zverev, has won a Grand Slam title.

At least, the great matchup should be completed with plenty of time before curfew. The Panama hats will be out in force.