One afternoon during the height of coronavirus lockdowns, 16-year-old Finn Kolesnik found himself in a cold sweat. He was on the phone with Bob Hamman, 82, one of the greatest bridge players ever.

Kolesnik wanted to know if, um, maybe Hamman and his longtime bridge partner, Peter Weichsel, 77, would join his team for this year’s North American Online Bridge Championships Premier Knockout, being held from July 23 to Aug. 2?

“Who’s better to play with than the historically best player of all time?” said Kolesnik, a high school junior in Ventura, Calif., who learned bridge from his parents when he was 13.

Though Kolesnik casually knew Hamman through his father, who also plays bridge, he thought the request was a long shot. Both Hamman and Weichsel are Grand Life Masters and in the Bridge Hall of Fame. Kolesnik had only been playing three years, but Hamman responded quickly: He was in, and thrilled that teenagers were even interested in the game. “There’s not enough young people playing,” he said.

The unlikely group, which included Kolesnik’s bridge partner, 20-year-old Jacob Freeman, recruited Bart Bramley, 72, and Kit Woolsey, 76, to round out the team of six.

“It’s the greatest game ever invented,” said Bramley, who has been playing since he was 5 and is also a Hall of Famer. “I saw my father playing in the living room with three other guys. I didn’t know what they were doing, but I knew I wanted to do it.”

And so, a group that included among the oldest and youngest bridge players were trying to win a national bridge title. It most likely wouldn’t have happened without the coronavirus.

“Players of the level of Hamman partnering up with young folks in a major event like that is not something I ever recall seeing,” said Greg Coles, the director of operations for the American Contract Bridge League, a membership organization. “It’s like playing with Kobe or Michael Jordan.”

Like just about everything else, bridge underwent a major shift when the pandemic began. In-person events and tournaments were canceled and this year’s world championship was rescheduled for late 2021.

The bridge community followed the rest of the globe and pivoted online. Within the space of a few weeks, bridgebase.com, the virtual platform on which most people play, grew from nearly 10,000 players at one time to 50,000. Funbridge, another online provider, reports more than 2 million players regularly, five times the rate before the pandemic.

Many professional players, including Hamman and Weichsel, had to shift to playing online for the first time themselves.

The average age of the ACBL’s 167,000 members hovers around 73, as the league is filled mostly with players who learned in the 1950s, ’60s and ’70s. As that cohort got older, they continued to fill the halls of bridge clubs around the country. But younger people weren’t exactly racing to learn a game associated with their grandparents or great-grandparents.

Not all of the older players were welcoming either. As one of the youngest players on the circuit — he learned at 6-years-old — Freeman, who grew up in Toronto and is now in his third year of business school, noticed that sometimes the old guard was displeased when he won. “I said to my dad, ‘They were so rude!’” Freeman recalled. “My dad was like, ‘That means you’ve made it.’” 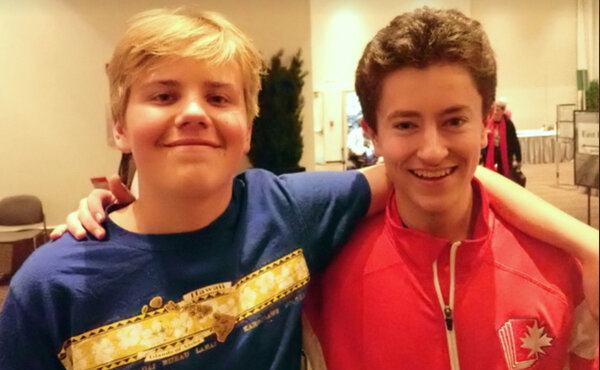 The ACBL has been trying to change the perception of bridge as a game for older people. There are national and international youth championships, online youth events and new bridge clubs on college campuses like Georgetown and the University of Minnesota.

“I’m seeing more younger people reaching out for something intellectually stimulating because they can’t go do the things they used to do,” said Patty Tucker, an Atlanta-based bridge teacher who coaches the Georgia Tech bridge club. “Bridge is a very intricate, strategic, intellectual game. It’s fun, but there are lots of levels to it and I think they relish that.”

Reese Koppel, 21, has been playing at the Louisiana Bridge Association in New Orleans since he was 11 years old. The older players treated him “like Elvis,” he said. “They saw me as a savior of the game.”

“This game taught me so much — people skills, compassion, emotional endurance, and an appreciation for the older generation,” said Koppel, who founded Yale’s 40-member bridge club and recently started an app called Tricky Bridge. “It’s not the cards you have, but it’s how you play them. Everyone’s going to pick up the same cards as you. It’s how you react to that sort of adversity.”

Adversity was in no short supply on Aug. 2, the last game of the summer tournament. Players were scattered throughout Michigan, California, Texas, Canada, and Norway, where it was 4 a.m. Team Kolesnik was getting pummeled. The score going into the fourth quarter was 85 to 113, the equivalent of being 20 points down in the N.B.A. finals with roughly five minutes remaining.

“We were just stuck,” Hamman said. The other team “had almost an insurmountable lead, with six hands to go.”

Somehow, they caught up and by the end of the night, the score had evened at 113-113. But after eight hours of playing, everyone was exhausted.

“Although sedentary, bridge is surprisingly grueling because of the mental energy and concentration required,” Weichsel said from his home in Southern California.

No one wanted to admit defeat. After a lengthy discussion with the tournament directors, the two teams shared the title.

Kolesnik and his unlikely team will aim for another victory at the next Knockout tournament, Nov. 27 through Dec. 6.

“One of the things I always liked about bridge was getting to hang out with people of all ages, which when I started out meant older people,” Bramley said. “Now that I’m on the other end, I still love it for the same reason.”