Budapest: Australia set a world record in the mixed 4×100 meters freestyle final at the world swimming championships on Saturday (AEST).

Jack Cartwright, Kyle Chalmers, Madison Wilson and Mollie O’Callaghan clocked 3 minutes, 19.38 seconds in Budapest to shave two-hundredths of a second off the record set by the US at the last worlds in Gwangju, South Korea, in July 2019. 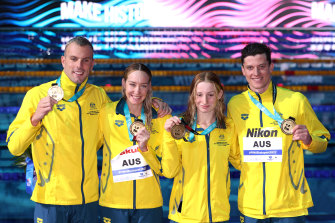 “It’s insane … I think we were always going to be hard to beat,” said Chalmers.

The Australians ended the Americans’ three-title winning run from 2015 to 2019 in this event. All four were won with a world record.

Canada’s team of Joshua Liendo, Javier Acevedo, Kayla Sanchez and Penny Oleksiak was 1.23 behind the Australians for silver, and the Unites States team of Ryan Held, Brooks Curry, Torri Huske and Claire Curzan was third, 1.71 behind.

But the US team had reason to celebrate. Olympic champion Katie Ledecky stormed to a fifth straight 800m freestyle title.

Ledecky won in emphatic style, finishing more than 10 seconds faster than Australia’s Kiah Melverton to seal her 19th gold medal at this level and go past Ryan Lochte. The American is now within seven of Michael Phelps’ all-time record.

“It’s just year after year of hard work. I think back to London and I made it the goal to not be a one-hit wonder, and here we are 10 years later,” Ledecky said. 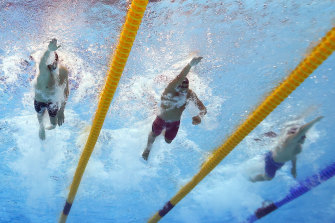 Hungarian swimmer Kristof Milak added to his 200m butterfly crown with victory in the 100m butterfly.

The Olympic silver medallist, who smashed the 200m butterfly world record earlier in the week, moved clear of the field with 25 metres to go and barely looked troubled as he secured the win in 50.14 seconds.

Swede Sarah Sjostrom was also among the big winners as she continued her domination of the women’s 50m butterfly for her fourth consecutive world title in the event and 18th individual medal overall.

The 28-year-old edged out France’s Melanie Henique and Zhang Yufei of China for a place on the top of the podium.

In the women’s 200m backstroke, there was heartbreak for American Phoebe Bacon after she was pipped to the title by Kaylee McKeown despite leading for much of the race.