Swimming greats Grant Hackett and Giaan Rooney have urged Emma McKeon to capitalise on her career-best form in Tokyo as she prepares to headline a stacked Australian women’s team at the Olympic Games in July.

McKeon may not have the profile of fellow stars Cate Campbell and world champion freestyler Ariarne Titmus but the 26-year-old has soared during the COVID delay and looks superbly placed to add some serious bling to her four-medal haul from Rio in 2016. 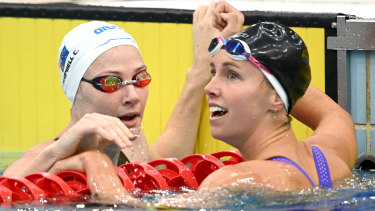 Emma McKeon, right, could be a major star in Tokyo.Credit:Delly Carr/SOPAC

The Michael Bohl protege is reserved by nature but her swims this year have been explosive. McKeon looks to have risen to the top at the perfect time and will be one of the key swimmers to watch at the Olympic trials in Adelaide from June 12.

She claimed 200m freestyle bronze in Rio, along with relay gold and a pair of silvers, but heads into Tokyo as a far more complete product as she continues her quest for an elusive individual gold at world or Olympic level.

She stopped the clock at 52.29 seconds in the 100m freestyle in Sydney last week, a personal best and the fastest time in the world this year. So striking has her rise been in that event that Campbell, a former world record holder, has been unable to get past her this year and will have a major task of taking her familiar top spot at trials.

So many people in Australian swimming are hoping McKeon’s form can translate to success in Tokyo because she has long been one of the busiest and best racers on the Dolphins. She could suit up in as many as eight events at the Games and Hackett believes she can deliver on the grand stage. 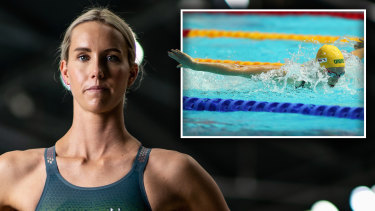 Australian swimmer Emma McKeon is tracking towards a big medal haul at the Tokyo Games.Credit:Getty, Getty

“It’s her time. And she knows how to execute. She’s a sensational performer and she knows how to deliver on any stage and get the best out of herself,” said Hackett, who along with Rooney was unveiled as part of the Amazon Prime Video commentary team for the Olympic trials.

“She’s in the form of her life and has momentum on her side. She’s been around the block as well and knows what to expect.”

McKeon is in the prime of her career and knows the importance of these Games. The delay hasn’t been kind to everyone but McKeon, who swam through illness at the 2019 World Championships, looks to have been a major beneficiary of the added 12 months.

“It’s hard not to say that it’s her greatest opportunity yet to do something super special. I hope she does it. She’s a great person and a great teammate and that’s why so many people want to see her do so well. She’s collected a lot of medals and I hope some of those are gold,” Hackett said.

Rooney, a gold medallist from the 2004 Games in Athens, said McKeon was deserving of star status given the importance of her swims in a slew of relay success over the years. Like Hackett, she believes McKeon is poised to strike in Tokyo.

“It has to be [her time] and I really hope it is. Emma, most people wouldn’t be aware of the superstar she is … she’s prolific. She was our most medalled athlete out of Rio,” Rooney said. “Because she hasn’t had that elusive individual gold, she isn’t mentioned in the same breath as some of the headliners. But she deserves to be there. This is her Olympics.

“She’s always got people coming at her from all sides, especially domestically. She is used to that competition and that drives her. She’s such a beautiful, reserved, shy person, she doesn’t big-note herself at all, then she gets up on the blocks and blows them away. You want Emma on your team every day of the week.”