The International Olympic Committee’s insistence that the Tokyo Games can go ahead safely has taken an unfortunate turn with president Thomas Bach cancelling a trip to Japan due to surging COVID-19 cases in the host nation.

While Bach’s cancelled trip is not seen as a sign the Games are in doubt, the visit would have been a public relations win for the IOC and Tokyo Olympic organisers given the resistance to staging the event, due to begin on July 23. 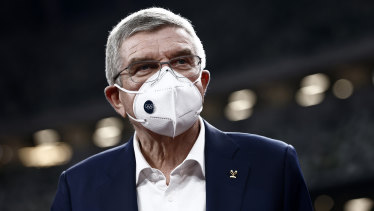 IOC president Thomas Bach has postponed a trip to Tokyo due to a surge in cases of COVID-19.Credit:AP

The postponement of Bach’s trip comes as tennis star Naomi Osaka, one of the biggest names in Japanese sport, raised questions about the legitimacy of the Games and said there should be more discussion about the viability of holding them given the current circumstances.

Tokyo, which will host the majority of Olympic events, remains in a state of emergency to try and stem the tide of coronavirus cases. Japan has had a low vaccine rollout and is averaging around 5300 cases per day over the past week.

The added restrictions were due to end this week but have been extended to May 31. Bach’s visit would have taken him to Hiroshima to meet the torch relay, then onwards to Tokyo. An IOC statement said he would make a pre-Games trip to Japan “as soon as possible”.

Japan’s health system continues to struggle with the case load but the IOC believes it can hold a safe Games for the athletes and citizens, with the attendance of spectators to be decided closer to the start date. Already, foreign visitors, which includes the families of athletes, have been banned from attending.

The IOC are partly banking on a high percentage of its athletes being vaccinated, with vice-president John Coates saying last week he hoped that number would be as high as 90 per cent given the national vaccination programs around the world and an IOC deal struck with vaccine producer Pfizer.

However, critics say the IOC is ploughing ahead for financial reasons given it is funded in large part by broadcasters, with American TV giant NBC supplying up to 40 per cent of its budget.

Osaka had planned to represent Japan in tennis at the Games but admitted she was worried the event was making people “uncomfortable”.

“Of course I would say I want the Olympics to happen, because I’m an athlete and that’s sort of what I’ve been waiting for my entire life,” she said Sunday at the Italian Open.

“But I think that there’s so much important stuff going on, and especially the past year. I think a lot of unexpected things have happened and if it’s putting people at risk, and if it’s making people very uncomfortable, then it definitely should be a discussion, which I think it is as of right now.”

Osaka would have been one of the faces of the Games for Tokyo organisers, who are now faced with hosting what would essentially be a made-for-TV Olympics that could see athletes competing in front of empty stands.