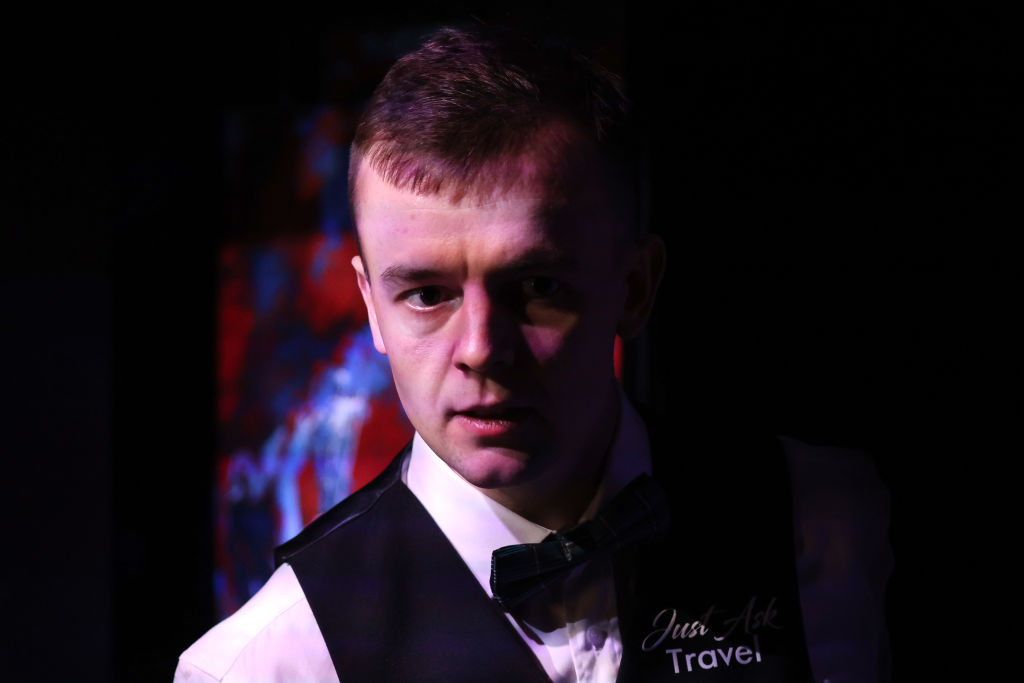 Ashley Hugill enjoyed his first run to a ranking quarter-final at the English Open and admits it came out of the blue after a below-par and chaotic start to the event.

The 28-year-old picked up some fine wins in Brentwood, seeing off Fan Zhengyi, Pang Junxu and Martin Gould before falling in the last eight to the man of the season so far, Mark Allen.

Having made his Crucible debut at the end of last season, the Yorkshireman’s career has been progressing, but he hasn’t had great results this campaign, so he didn’t quite see this good run coming.

Especially as he came into the English Open feeling awful and still trying to get used to a technical change in his game.

‘I’d have to say no, I didn’t see it coming,’ Hugill told Metro.co.uk. ‘I do try and think positively. I do tell myself that any week could be my week, but I didn’t feel anything coming, especially with the way I felt.

‘Coughing, sneezing, I’ve been sleeping terribly, blocked nose, up in the night coughing. I did wonder how I was even going to get through the first game.

‘I’ve also made some technical changes over the last month or two and I’ve not really felt confident with that yet, I’ve not got it down. So it couldn’t have come more out of the blue really.’

What may seem like a minor change is taking some getting used to for Hugill as he doesn’t tend to tinker and, although it still doesn’t feel natural, it seems to be working.

‘I’m working with Ian McCulloch, it’s basically moving my hand in closer to the white to try and have more control,’ he said. ‘It’s taken a lot longer than expected for it to feel good. I’m not one for making changes, I’ve not really made one in five or six years. I’d still say now I’m not exactly 100 per cent with it, but it seems like it’s more effective in the balls, even though it doesn’t feel great.

‘Someone watching could hardly tell the difference, it’s only a little thing, but it feels so different, I felt all over the place at first, but I’m getting used to it now. I’ve had a good result, my best result in a ranking event but I can’t say I felt good really. I was just trying my hardest as usual.

‘I can’t say I felt brilliant. Coughing, eyes watering, tired, but just really trying and the technical change must have worked if I felt like that and got some good wins.’

The tournament could not have started in a stranger way either, even without the illness and technical evolution.

Hugill was given a walkover in round one when his opponent Yan Bingtao was forced to withdraw amid the ongoing match-fixing scandal.

There was drama to come with that, but the chaos started the night before when Brentwood was covered in snow.

‘Getting the walkover was a big surprise, I didn’t expect that at all,’ said Hugill. ‘It was a relief in one way, because I was feeling awful and the walkover meant I had a couple of days off.

‘Also the previous night it had snowed and I couldn’t get to the hotel I’d booked because it was up a big hill. My car wouldn’t go up it at all. I ended up pulling up to a Holiday Inn, but they were full, then my car was stuck in their car park!

‘I got my cue and my suit and had to walk off into the snow and found somewhere that had a room left. That was 10pm and I was playing at 10am. I got somewhere but it was their only room left and it was the executive suite, so it cost me a fortune!’

Hugill turned up to play his first round game against Yan, who he regularly practices with at Victoria’s Academy in Sheffield, and was shocked to hear that the game was off and he was into the next round.

‘[Referee] Paul Collier pulled me out the players’ lounge about 9.45am, told me Yan had arrived but he’s got a disciplinary and he’s being withdrawn from the event, so you’ll have a walkover. That was all I was told,’ he explained.

‘I didn’t have a clue about it. Obviously I knew about the other players being suspended a few days before, but I thought that was that.

‘I knew Yan was there [in Brentwood], we have an academy group chat and if it was a travel thing I’d have seen it on there. I was really surprised to see what happened.

‘I’ve not actually been in the academy since, I’ve taken a few days off to get over the cold, but I’ll be back in soon. It’s disappointing, it doesn’t look good for the sport, the sport we all love. It’s been a dark few days for the sport.’

As for the rest of Hugill’s season, he hopes it will be buoyed by the impressive run in Essex and the pressure off to an extent after pocketing £11,000 at the English Open.

The Yorkshireman ran into Neil Robertson in the last 32 at the Crucible this year but he wants to get back there for another crack at the sport’s biggest stage this season.

‘It had been a bit of a disappointing season to that point, but I’m relieved to get it back on track to an extent,’ he said. ‘Hopefully now I can kick on like I thought I was going to kick on after the end of last season.

‘Hopefully I can finish strong again, get some more good runs and really build back up towards the World Championships again and go into that with a lot of confidence. Definitely the Crucible is the aim, without a doubt, the aim is to finish the season at the Crucible again.’