NASCAR fans praise Trump for being a part of Daytona 500

In a crash-marred Daytona 500 following a one-day rain delay, Denny Hamlin won the 62nd running of NASCAR's Daytona 500 Monday which featured a total purse of $23.6 million.

The race — the longest in Daytona history — marks back to back Daytona victories for Hamlin.

While President Trump was what everyone was talking about when the race began on Sunday before being postponed for the weather, on Monday it was three major crashes in the last 25 laps that had race watchers stunned. The crashes wiped out some of the sports' biggest drivers such as Kyle Busch — who was leading the race when he was eliminated from contention — Joey Longano and Jimmie Johnson who was racing his in final Daytona.

Hamlin now has 38 career wins — which has been good for more than $70 million in race winnings Here's a look at the 2020 winner: 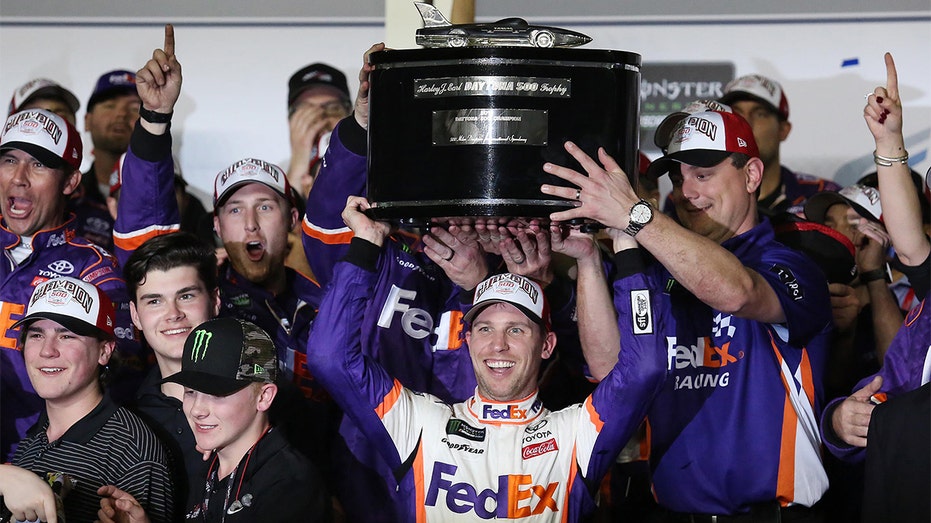 Being second place isn’t a problem for Joe Gibbs Racing’s Denny Hamlin, who has made a generous $14.6 million in total NASCAR earnings last year, according to Forbes. A whopping $13.1 million came directly from Hamlin’s salary and winnings while the remaining $1.5 million is made up of endorsements and licensing. His current sponsors include Toyota, FedEx, Nike’s Jordans and Coca-Cola.

Hamlin races in the NASCAR Cup Series and competes on a limited basis in the Xfinity series. Throughout his career, he has amassed 37 Cup wins, including the 2016 and 2019 Daytona 500 as well as the 2010 and 2017 Southern 500. Hamlin has qualified for the NASCAR Playoffs 12 times.

Among his other accomplishments, Hamlin’s net worth is said to be around $65 million, according to Celebrity Net Worth.