Australian cricket cannot escape its "soap opera" with the ghosts of 2018 following the team to Sydney for the new year.

Coach Justin Langer has conceded Cameron Bancroft’s controversial interview, which overshadowed one of the marquee days of the cricket calendar, was a distraction for the Test side in their loss to India in Melbourne. 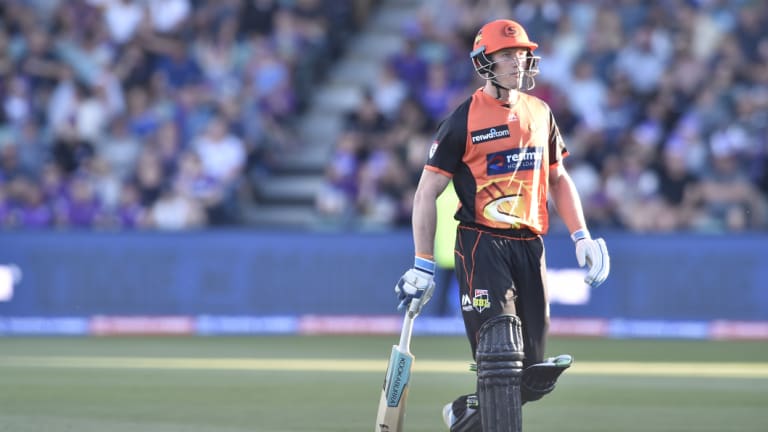 Distraction: Cameron Bancroft will be in Sydney on BBL duties while the Test squad prepares for the fourth Test.Credit:AAP

On Wednesday night, as Australia's players gear up for the fourth Test at the SCG, Bancroft will be across town at Spotless Stadium on Big Bash League duties for the Perth Scorchers.

In another twist of fate, David Warner's Sylhet Sixers will take on Steve Smith's Comilla Victorians in the Bangladesh Premier League on Sunday night – a match-up which would not have been possible had the Bangladesh board not made last-minute changes to their rules to allow the former Australian captain to play in their Twenty20 tournament.

Smith and Warner are working to repair their relationship, which was strained after the events in Newlands. The pair have already squared off in Canada's Global T20 and more recently in Sydney’s first-grade competition.

Momentum is building for the pair to be recalled to the national side once they complete their 12-month suspensions in late March.

Test captain Tim Paine gave the strongest indication yet they will be welcomed back to the Test side for the Ashes, which Australia will have little hope defending without them having lost four of six games since the bans were handed down.

Cricket Australia is exploring how Smith and Warner can play in the final two games of the one-day international series against Pakistan in the UAE.

There could be a scenario where the duo are able to train with the team on tour but not join in the player/match official area on game day until their bans expire.

With all this drama in the background, it is little wonder Langer could be forgiven for thinking his job is not as a cricket coach.

"It's all just part of the soap opera we're in every day. I feel like a director of a soap opera at the moment, I honestly do," Langer said.

Bancroft made his comeback to top-level cricket on Sunday when he was jeered to the crease then given mild applause on his way off the ground after making two.

While those close to Bancroft were expecting a different reaction to his interview with Adam Gilchrist, which drew wide criticism, the opener is said to be feeling better having completed it.

Langer has previously referred to Australian cricket as a "dysfunctional family" with the sideshow of last week a case in point.

"That's part of coaching – it's man management, looking after people and caring for people," Langer said.

"That was just another distraction last week. There's different ways you can look at those interviews.

"It's just another part of our day-to-day job. We're in touch with the boys all the time, there's a really good process we're going to go through to get the boys back into the team. It was great to see Cameron playing last night. It's part of the soap opera."