Four years ago when Nine still had the cricket, I was interviewing Virat Kohli when I learned a lot about his character. It was not anything he said but the manner in which he conducted himself. We were filming in a studio at Adelaide Oval the day before the Test when the national anthems blared out on the loudspeakers, as part of rehearsals for the following day, forcing us to take a break. When the anthems stopped after some 10 minutes, the India media manager told me my half-hour was up and gestured for Kohli to leave.

Instead of trotting off, as he was entitled to do, Kohli turned to me and asked if I needed more time. I told him I still had a few questions I wanted to ask. ‘‘Come on,’’ he said. ‘‘Let’s sit back down, let’s do it.’’ I thought that was terrific. 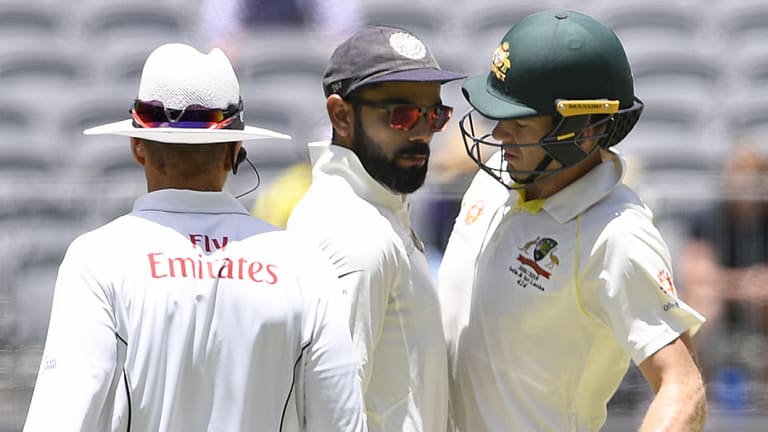 Up close and personal: Virat Kohli and Tim Paine exchange words in the second Test.Credit:AAP

The Kohli I see on the field is a lot different. He is an outstanding batsmen but also hard-nosed and confrontational. I would not be surprised if most Australians mainly see him as the latter, which is unfortunate. While he generally captains the side well, the way he behaves at times does not do himself or his team any good.

His goading of Tim Paine into a confrontation in Perth worried me. He was trying to elicit a reaction from Paine: ‘‘Where are you at, mate? Are you prepared to take me on?’’

That’s exactly what the game does not need. Cricket is a game about bat versus ball with a bit of theatre when required.

By all means celebrate hard when your side claims a wicket, or you take a catch at slip, but running down the pitch at umpires and giving send-offs to batsmen is not on.

That sort of behaviour leaked into the Australian cricket team over the years and is partly the reason we are here today. India, with Virat as their leader, can learn a lot from what has happened to Australia.

The stump microphones drew a lot of attention away from the play. It might sound strange for someone who has made a living in the commentary box for almost 20 years but I don’t like them at all.

There are things that happen on the field that should not become public knowledge. There is a mystique in not knowing.

I heard an over from Rishabh Pant behind the stumps and could not stand it. It was inane chatter. Players will become aware of it and start saying things for the sake of getting on television. 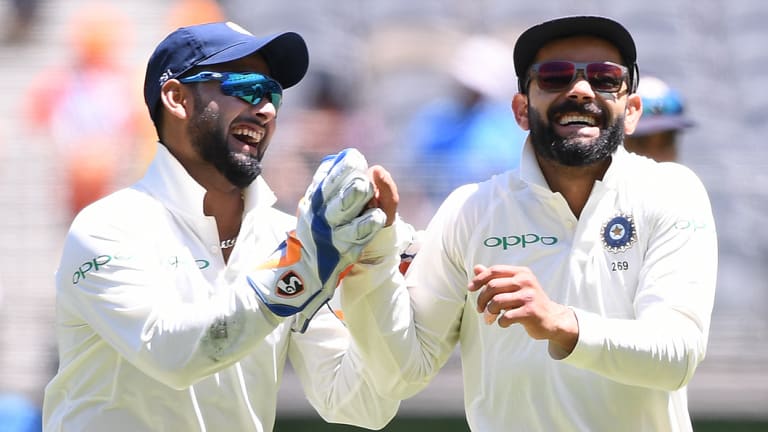 Chatterbox: Rishabh Pant, left, is becoming renowned for his running commentary in Hindi and English.Credit:AAP

Perhaps I am an outlier, but I prefer to watch the game and hear an expert commentator talk rather than a wicketkeeper ranting for six balls. Maybe that’s because I’ve heard it all before standing at first slip my whole career.

One ’keeper I am enjoying is Paine. I wrote before the series Tim was the right man to lead Australia and he’s showing why. The way he is handling Kohli is superb. He has found that line between not overreacting while also letting his opposing captain know he is not weak.

It’s clear Kohli wants to test Paine and he’s met his match, which is saying something given he is one of the best players in the world and the Australian captain, with 17 Tests, is relatively inexperienced.

So far Paine is winning the battle of the skippers. He’s keeping very well, taking his catches and his stumpings, and making useful runs when his team needs them as he did in both innings in Perth.

Above all, he is proving himself to be a strong leader who can stand his ground when tested by a fiery opponent while also respecting the game.

His next challenge will be to handle rising expectations among Australian fans now that the team has not only proven they can play in the right manner but also win.

Without Steve Smith and David Warner, Australia were the underdogs but they have done more than compete well, they have won a Test and were not far away from winning the other one. Now the fans want to see Australia win the series.

The focus now is not on the team’s conduct, which remains important, or what took place in South Africa, but what will take place on the field. It will be like any other summer. After the year we’ve had, that’s great for Australian cricket.

Mark Taylor played 104 Tests for Australia, 50 of them as captain, and is a former Cricket Australia board member.