Peter Snowden will wait until later in the week to decide if Hightail will head to the Gold Coast for the Magic Millions Classic after a commanding win on the Kensington track at Randwick on Saturday.

Jockey Hugh Bowman is booked for Hightail, but the fact that the gelding will need to make the 900km trip north and race for a third consecutive week will be taken into account.

“It is a hot day but that was a very good win and it gets him in,” Snowden said. “He won’t go until Tuesday, but will we will see how he comes through that run.  The owners are keen to have him there, so I would say he will be there. 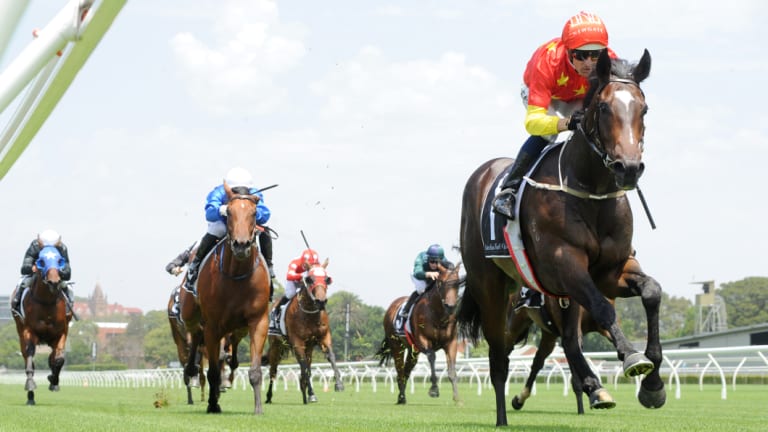 Doing it easy: Hightail clears out to win at Randwick on Saturday.Credit:AAP

“We had the option of going up to the Gold Coast today but decided to stay here, and he was pretty good.

“It is a big task to run three weeks in a row, but if he comes through it all right he should run a good race because he is that sort of horse.”

Hightail was shortened from $101 to $26 and for the Millions and  then backed again into $15 after he box seated and sprinted clear in the straight. The $3 favourite,  Hightail opened a 2¼ length  margin to Avon River ($3.80), with Twentyfour Carat ($8 ) finding the line hard for third of a half-head away.

Hightail finished third to the Lindsay Park-trained Movie Role at Randwick a week ago, and that  filly is also at $15 for the Magic Millions Classic.

Bowman believed there is more in the tank for Hightail and, in a Magic Millions where there is no stand-out, he could be a winning chance.

“He did it in style today He is a bit of a progressive horse,” Bowman said.

“It will be a a different kettle of fish next week, of course. He floated a bit when he hit the front.

“He is not going to improve five lengths on that, but he will improve a little from that experience.

“He will go there and run his race.”

The win of Hightail dented the hopes of  stablemate Rome, which was runner-up in the BJ McLachlan Stakes at Doomben last week,  getting a start a Millions start.

“We have booked Brett Prebble for Rome and we are hoping that he gets a run,” Snowden said. “That would make it harder for him, but he has taken improvement from the other day and it would be great to have him in the race.

“He would give us two good chances.”

The unbeaten Unite And Conquer remains the $5 Magic Millions favourite for Gai Waterhouse and Adrian Bott after wins in Melbourne and the Wyong Magic Millions. Dubious, the Breeders Plate winner, and Yes Yes Yes are next in betting at $6, with Czarson at $9.

Snowden said it would be another soft week to get Hightail to run his best race at the Gold Coast.

“We didn’t do that much with him in the last week and he took improvement, and it would be the same leading into the Millions,” Snowden said.

“He is a little professional, which has won two from three and will run a good race up there.”