But writing in Mamamia.com this week, Jessie Stephens nailed it:

“If this were any other demographic in the country; ‘African gangs’, Muslims, refugees, our Indigenous population, then we would be in a hysterical state of moral panic. Prime Ministers would be making speeches. Policy would be reconsidered. We’d be clutching our pearls and locking our doors. But NRL players can do what they like.” 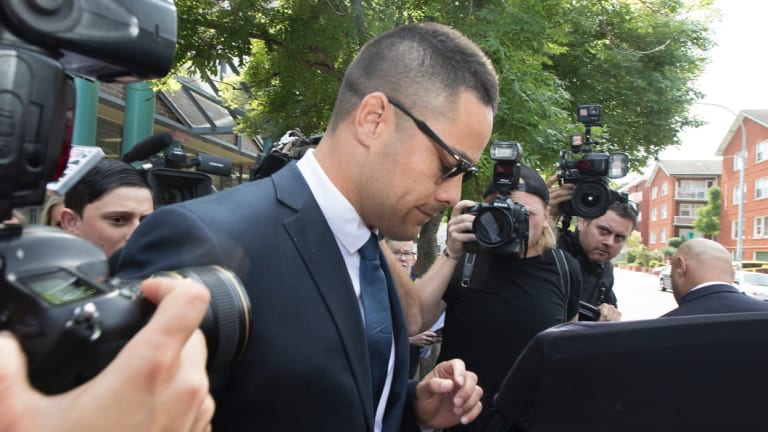 The move by Todd Greenberg this week to deregister   Sharks  coach Shane Flanagan and Tigers CEO Justin Pascoe for allegedly breaching NRL suspension provisions and salary cap regulations is a signal: We are serious about this. Get it right.

The NRL needs to get even more serious about the appalling track record of NRL players when it comes to the treatment of women. In criminal law, a conviction requires proof “beyond reasonable doubt".

For bringing the game into disrepute, the level of proof is a lot lower, and those players have arguably already done it. Once the legal process concerning the allegations of violence and sexual assault is completed, the NRL needs to fine the clubs, or even dock points from them. The line should be: "This bloody well happened on your watch. These are your players. Focus on this. Or face the heavy consequences."

Among other things, it would make clubs focus on the character of players before signing them.

You’re doing well, Todd. Do this.

Doing a number on Greg 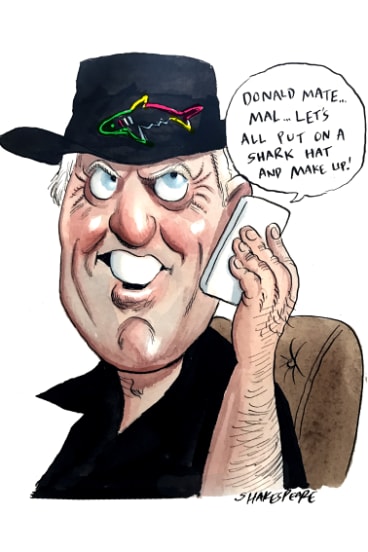 I  told you Greg Norman was a champion, and a selfless servant of our country. And I guess, in the wake of his interview with Leigh Sales on ABC’s 7.30 on that Tuesday evening in March, you’re all feeling pretty silly, yes, with your previous contention that with all his carry-on he would make Narcissus blush? I cite particularly his account of the famous moment when, after Donald Trump was surprisingly elected – don’t get me started – and Australia’s ambassador to the USA, Joe Hockey, asked him if he could have the President-elect’s phone number  to pass on to Malcolm Turnbull. I know you have sneered unpleasantly that it might have been a simple matter of, you know, passing it on.

I even know that when Greg told Leigh that he “played with Donald . . .  President Trump . . . excuse me, quite a few times,” you laughed out loud at the sheer ham-fistedness of the way he made the point that while HE was on first-name terms with the man in the Oval Office, the rest of us little Australians must think of him as “President Trump” and therefore – excuse Greg, because he keeps forgetting – he should refer to him in terms that even we  little people can understand. But you are just like that, always looking to put the great man down. You are the exemplar of the tall poppy syndrome.

I am not. And on the mobile number hand-over I was right! In fact, after listening to Greg talk about it for sixty seconds, I know he didn’t like to say it out loud, but I had the distinct impression that giving the mobile number  actually involved Greg selflessly first scaling the cliffs at Gallipoli  before chasing the colt from Old Regret that got away down the Snowy  before waltzing Matilda herself down the track winding back and then, and only then, was he able to give Trump’s mobile number to The Joester . . . sorry I mean His Excellency Joe Hockey.

Good on you, Greg, sorry, I mean Mr Norman! Not everyone gets you, but I certainly do . . .

Put down the glasses. It was the greatest sledge in rugby league history, and it happened in March. At the end of post-match press conference, the victorious Newcastle Knights  coach Nathan Brown was asked about recent comments made by one of his predecessors in the post, Wayne Bennett, to the effect that Brown had “unbuilt” much of the work that Bennett had put in to the Knights, meaning if the younger man had the job of building them up again, it was his own fault. 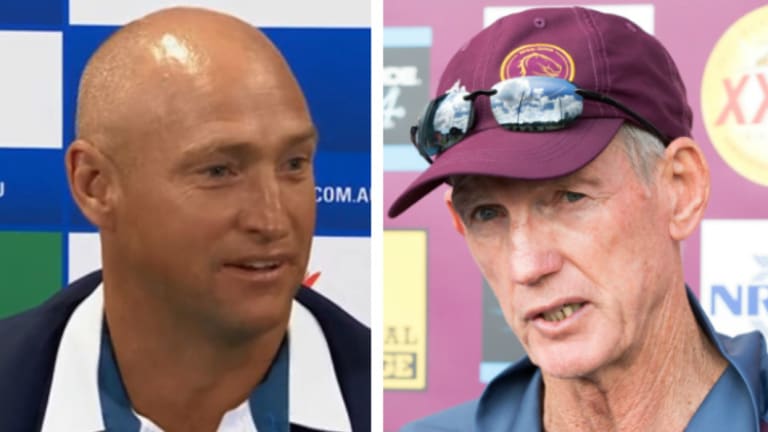 With a sparkle in his eyes, Brown lined Bennett up, and hit his riposte sweetly from the first.

“It's a bit sad isn't it?” Brown begins. “The old fox has won seven premierships, he has coached for 30 years, and I haven't publicly bagged Wayne or anyone . . .”

“Then he comes and has a shot at me. I don't think he needs to bait like that.”

“The reality is, when Wayne came to town, if he thought with his big head rather than his little head I wouldn’t have had to rebuild the joint . . .”

It’s straight between the posts!

Look, I get that Brown was in dangerous territory, as the comment fringes on family, and your humble correspondent has long been of the view that when family is insulted, all bets are off and the sledger has what’s coming. But, perhaps, Your Worship, I should have added a rider to it. For when there is no malice, and the family member concerned is only tangential to the true target of the sledge – the recipient – and it’s  funny  enough, I maintain it passes muster.

In terms of familial sledges, the best of the lot, I have previously noted, goes back well over a decade, and we have it on the authority of none other than Jason Akermanis that it is dinkum. See, when Brett Voss, playing for St Kilda, was lining up for a critical goal, late in game against Akermanis’s Brisbane Lions, the man in front of Voss trying to put him off was none other than his older brother Michael Voss.

Just as Brett had composed himself and was about to commence his run, the older Voss piped up: "My Dad's slept with your Mum!”

It was true. It was undeniable. And Brett missed.

In case you missed it, there was a wonderful piece in the SMH in April  by Tom Decent  about a 14-year-old schoolgirl, Amelia Derrett, who plays in a girls cricket side up Thornleigh way. And she is not just any player – for she is partially blind with “ocular albinism” and has tried to make the grade by practicing over the summer by bowling tennis balls in the back yard with a family dog who has played “fetch” till his little legs can fetch no more.

Just how blind is Amelia, you ask? Well, blind enough that, last week when she was bowling against a team from Parra-ma-tatta, though she heard what sounded like the stumps rattling a couple of seconds after the ball left her hands, it was only when her team-mates engulfed her, cheering, slapping her on the back, that she was able to confirm it.
“I was very excited because before that I sucked like every person does in their first few games,” she told the SMH. “I honestly thought my disability would hold me back from everything. I was always scared it would hold me back in life . . . I love team sports because I get to play with people.”

Oh, go on, say it with me. Gotta love this city!

Team of the week

Ellyse Perry. Winner of the Belinda Clarke Medal as the finest female cricketer in the country. 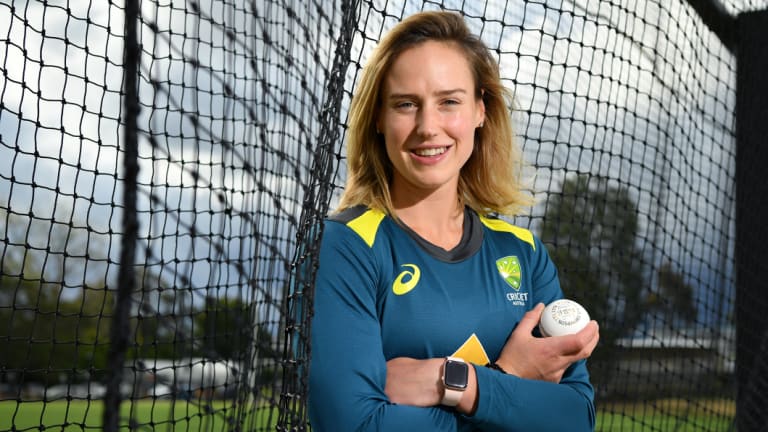 Net gain: Ellyse Perry has set the standard for cricket this year.Credit:Joel Carrett

Alex Blackwell. Australia's most capped female cricket player is retiring from the national side.

Lauren Jackson. ESPN has just released their list of the 20 Most Dominant Athletes of the 21st Century, and our own Ms Jackson came in at 13th, the fourth most dominant female, and the only Australian on the list.

Jasper Dix, Alasdair King and Andrew Hunter. The three young Australians played in the 137th Oxford v  Cambridge rugby match at Twickenham a fortnight ago, with Dix and King on the victorious Oxford side of the equation, 38-16.

RIP Sir Roger Bannister 1929-2018. The first man to break the four-minute mile, passed away in the first week of March, aged 88. Our own John Landy, a great man in his own right, is still going strong  on the bell lap!

Australian cricket captain Tim Paine last Monday to Indian players about their captain Virat Kohli: “I know he’s your captain, but you can’t seriously like him as a bloke?”

Dylan Napa on the haircut of the Bulldogs’s Aaron Woods, on MMM: “I can’t bag it because my mum’s got the same one.” 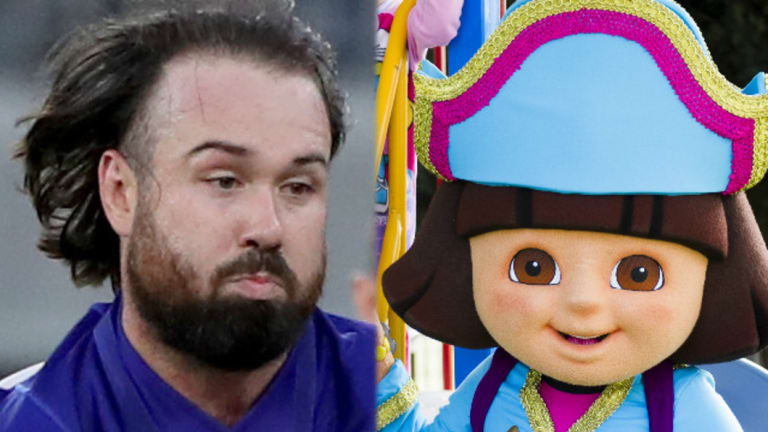 Cut above: Aaron Woods’ new ‘do earned some unflattering comparisons.Credit:AAP

Michael Shehadie, in his eulogy for his fine father Sir Nicholas in March, recounts the words with which the doctor greeted his mother, after his birth back in 1925: “Congratulations Ms Shehadie, you've just delivered a baby elephant.” In a sign of things to come, Sir Nicholas weighed in at 6.4kg, 14lbs in the old money, or, a neat stone.

French ice dancer Gabriella Papadakis on her on-ice wardrobe malfunction, which saw her nipple exposed: “I felt it right away and I prayed. That's about what I could do.” It didn’t help, I presume because God instinctively looked away.

Greg Norman on mending bridges between Malcolm Turnbull and Donald Trump: “I don’t normally give out cell phone numbers of people in my database but, considering it was for the Prime Minister to call the President of the United States, I thought that would be the right thing to do.” Shoot me. (See item.)

The official twitter account of the Scottish Police, put out the following tweet in late February.“We are receiving calls reporting singing & cheering across Scotland but it seems particulary focused on the area of Murrayfield Stadium, Edinburgh. We have alerted all on duty officers and will investigate these reports. Some beat officers will walk 500 miles to investigate.” Yes, folks, for the first time in a decade, the Scots had downed the English in the Six Nations, as the wheels of our Eddie’s chariot started to wobble, just a little.

Matthew Mason-Cox, a former fair trading minister in the State LNP government, on #StadiumSplurge: “[It is a damning indictment of the current system that] a couple of sporting stadia [can be prioritised] before the welfare of the most vulnerable children and families in our community. It’s a no brainer as far as I’m concerned.” Last year 55,000 NSW children officially judged “at risk,” were left in precisely that state, because Family And Community Services had insufficient resources to pursue their case.

Arnold Schwarzenegger on how he has maintained a punishing fitness regime  well into his 70s. “Working out is not just difficult to do in the beginning. It’s always going to be difficult. I say to people, ‘don’t think’. Just get up, get on your bicycle, ride the bike,  then  start thinking. Because as soon as you start thinking, you will have 5000 reasons why you shouldn’t do it.” Think of that  as your motif for 2019, you boogers!

SMH CBD column on Tom Waterhouse’s services no longer being required by the new owners of the betting agency he has been working for: “It is clear [Crownbet] has no use for the wunderkid other than to thank him for his role in delivering the William Hill business – built on $770 million worth of acquisitions – to CrownBet for just $300 million. The controversy over the relentless promotion of the Waterhouse brand all those years ago almost single handedly triggered the regulatory backlash which made William Hill’s market position in Australia untenable.” Excellent.