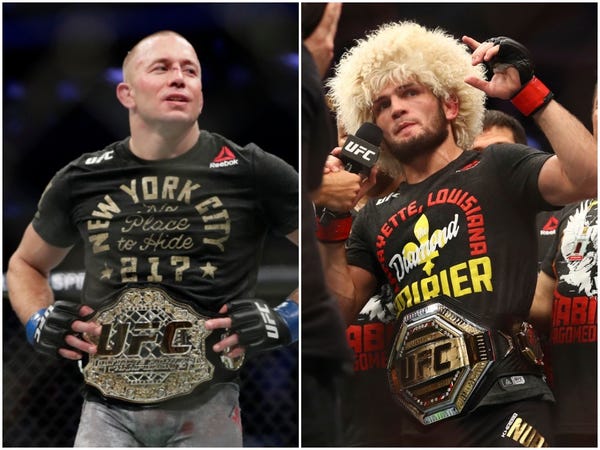 FIGHT ISLAND — Georges St. Pierre would be the ideal opponent for Khabib Nurmagomedov to retire on, his trainer Javier Mendez said Wednesday.

Mendez talked to the MMA media at a Fight Island press conference attended by Insider ahead of Nurmagomedov's UFC lightweight championship defense against Justin Gaethje.

The bout takes place Saturday at the Flash Forum on Yas Island in Abu Dhabi, and will be the sambo specialist's 29th professional MMA match.

Should he be victorious, there will be intense speculation as to whom Nurmagomedov, 32, will be matched against for his 30th fight — a bout that may be his last.

"If we get past Justin and I hope that we do because that's the plan, I would like GSP," Mendez said.

It has long been understood that Nurmagomedov talked at length with his late father Abdulmanap Nurmagomedov, who died in May after coronavirus complications, about a legacy fight involving the 39-year-old St. Pierre — one of the best mixed martial artists of all time.

Mendez appeared to confirm these talks, saying he was present for one of the conversations.

"I was in the car when [Khabib] and his father discussed the ideal last opponent would be GSP," he said. "Now, I don't know if it's Khabib's last fight, but let's presume it is like you're saying … I would say GSP would be my number one pick."

Another of Mendez's students at his American Kickboxing Academy in San Jose, the former two-weight UFC champion Daniel Cormier, agreed that St. Pierre would be an ideal final opponent, if Khabib beats Gaethje and decides he wants one more fight before retiring.

"If Khabib gets past [Gaethje] and he's 29-0 and looking at his retirement fight, I think it has to be St. Pierre. That's the fight," Cormier said at a Fight Island media day.

At a face-off event on Yas Beach, Nurmagomedov deferred the direction of his 30th fight to the UFC when he was asked about what could possibly follow a fight against Gaethje.

"What the UFC has after this fight, you guys have to ask [UFC President Dana White] because he calls us and then we talk about fights. What's going to happen after? I don't know. Right now, I'm focused on Justin Gaethje."

On the legacy he wants to leave, he said: "I just want to retire undisputed, undefeated UFC lightweight champion. Here, in sport, I have this goal."