Aaron Finch is blaming no one but himself for losing his spot in Australia’s Test side.

While the likes of close mate Glenn Maxwell and former teammate Rob Quiney have lamented the fact Finch hasn’t been afforded a chance to play as a Test batsman in the middle order, where he has largely batted for Victoria in the Sheffield Shield, Finch is taking responsibility for his failure to fire during the first three Tests of the series against India. 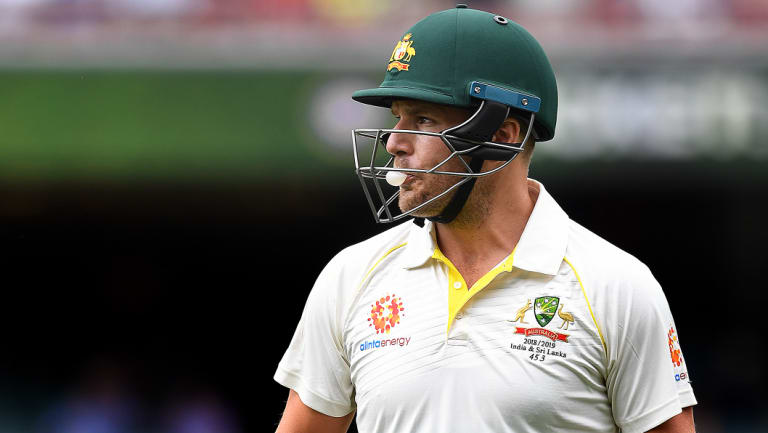 Aaron Finch was dropped for the Sydney Test.Credit:AAP

"They obviously made some changes now, but I still think he’s good enough to play Test cricket. Whether he gets another opportunity is really out of my hands and probably out of Finchy’s hands to some degree. It’s really the four guys who sit around the table and subjectively pick a side.

“Would I have loved to see him get an opportunity in the middle order? The answer to that is probably yes. Did I love seeing him play Test cricket? Yes. So if he wasn’t going to in bat in the middle, I would have preferred him to open than not play at all.”

McDonald elaborated on the reasons Finch has been batting in the middle for Victoria.

“Because we’ve got two good openers, we’ve got a good No. 3. We see him being destructive against the ball that’s probably not moving as much.

"The higher up you go, you get tested with the way you play, and we believe for Victoria he can really take down spin, we think he’s a really good player of spin, and he can turn games at four, five and six. So that’s where we see him.”

Finch will return to captain and open for the Renegades against the Hobart Hurricanes at Marvel Stadium on Monday night, before he leaves his Big Bash League club again for ODI duties.

The Renegades have lost three games in a row and could badly do with their skipper given their batting has largely flopped so far this season.

McDonald said they would continue to tinker with their order.

At least one player will have to make way for Finch, with stand-in captain Tom Cooper and veteran Cameron White both under pressure to keep their spots following poor starts to the season.