Little more than five weeks out from the Australian Open, it’s unclear whether the tournament will become the latest grand slam to adopt deciding-set tie-breakers.

Exceptionally long singles matches have been a hot topic in 2018, mainly thanks to the pointy end at Wimbledon when Kevin Anderson eventually defeated John Isner 26-24 in the fifth set of their singles semi-final. South African Anderson then lost the final to Novak Djokovic in straight sets.

Tennis Australia has reportedly been given permission by the Grand Slam Board to introduce final- set tie-breakers, with an aim of shortening matches, as early as next month’s slam at Melbourne Park. 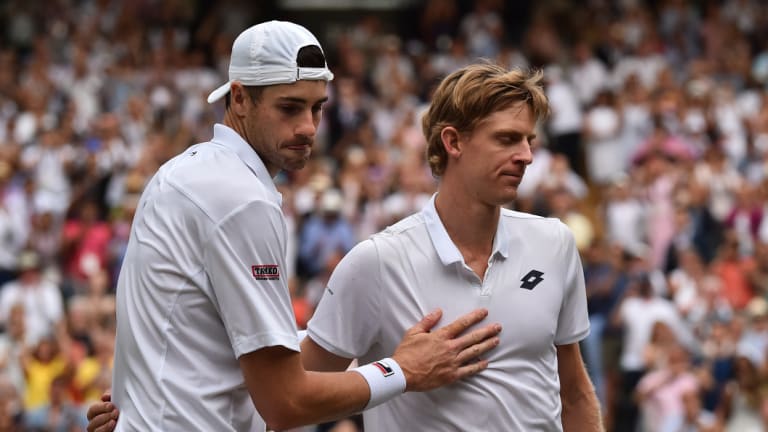 But in another twist, matches in Australia would potentially be decided by "super tie-breakers" (where players must reach 10 points and be two ahead) when the game score is locked at 6-6.

Should that new scoring system be adopted in Australia, it would mean the four grand slam events would operate with different tie-breaker systems. Wimbledon recently bowed to pressure from players, coaches and fans and introduced a convention final-set tie-breaker (first player to seven with a margin of two) but only when the game score reaches 12-12.

“While we know the instances of matches extending deep into the final set are rare, we feel that a tie-breaker at 12-12 strikes an equitable balance between allowing players ample opportunity to complete the match to advantage, while also providing certainty that the match will reach a conclusion in an acceptable timeframe,’’ All England Lawn Tennis and Croquet Club chairman Philip Brook said in October.

There’s no indication final-set tie-breakers are on the agenda for the French Open, while at the US Open all sets are decided by an orthodox tie-breaker when the score reaches 6-6.

Tennis Australia has reportedly received approval for a year-by-year trial of the new system, but such a change may not come into effect in time for the 2019 Australian Open, starting on January 14.

It’s also unclear if the tie-breaker change will be made for both the men’s and women’s draws.

Meanwhile, 10 Australians will have direct entry to the men’s and women’s main singles draws, with tournament officials already boasting about the exceptionally strong fields for Melbourne Park.

The world’s top 102 women and top 101 men have all indicated they will compete at next month’s first slam.

The depth of the men’s draw, coupled with a disappointing end to his 2018 season, has left Nick Kyrgios, ranked No.35, with the prospect of missing a seeding for the first time at a major since the 2015 US Open.

Kyrgios is no longer Australia’s highest-ranked men’s player. That distinction belongs to Alex de Minaur who, after a ground-breaking season, is ranked 31.