MOROCCO midfield general Sofyan Amrabat was late out for the second half against Croatia in World Cup Group F with fans speculating he was on the toilet. 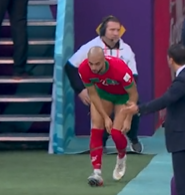 Amrabat managed to shut the 2018 World Cup finalists out heading into the half-time break.

But his hard work in the first 45 saw Amrabat arrive back out on the pitch LATE for the second half.

And Amrabat running out adjusting his socks and shorts has left fans saying the same thing: When nature calls, you answer.

One said on Twitter: "100 per cent Amrabat was on the toilet."

Another replied to ITV questioning what kept Amrabat in the changing room, saying: "Gary Lineker might know."

The fan is, of course, referring to Lineker's infamous incident that saw him take a poo on the pitch at Italia '90.

Amrabat is having a standout game with Morocco holding Croatia to a 0-0 draw.

The clash between Morocco and Croatia ended 0-0.