It's not quite what anyone expected.

Halfway through the W-League season and triple champions Melbourne City are second last on the table, with only the hapless Western Sydney Wanderers below.

City have the second-worst goal difference (-3) and seven points from their six games: to make matters worse, cross-town rivals Victory, who have been their inferior for several years, have revamped their operations and are sitting top. 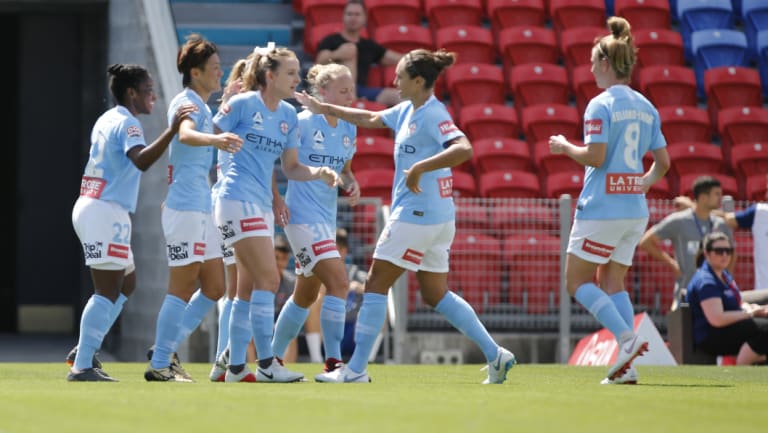 Melbourne City can avoid few mistakes in the run home.Credit:AAP

The good news for City fans is that the table, with the exception of Western Sydney with just one point out of a possible 18, is extremely cramped.

Third-placed Perth Glory has only three points more, while Victory and second-placed Brisbane are just six points ahead of City.

It is, says City's experienced Matilda Elise Kellond-Knight, a very close competition – which means that almost any team has not just a chance of making the finals but winning the title from outside the leading group, as City itself did last year.

"K-K", as she is known, is one of the best-known Matildas, having played more than 100 times for her country. This is her first season in Australia for three years, having played in Germany and Sweden since 2015.

City, she explains, missed several key players early in the season but the team is optimistic results will pick up in the second half of the campaign.

"We are getting some key personnel back now," the defensive midfielder said.

"We knew we would not have our full-strength squad straight away. We knew we would have to hang on and stay in touch with the competition, get as many points as we could until they returned.

"We have had Steph Catley back for 45 minutes, we hope to increase her minutes. It was also hard when we had to do without [New Zealand international] Rebekha Stott … I had to go back and play at centre-half for a game.

"We do have to make a move now … every game will be like a cup final from here."

City got back into the winning groove last week with a 3-1 triumph in Newcastle and they will be looking to avenge the first-round loss to Canberra when they host the ACT visitors in the curtain-raiser for the Melbourne derby on Saturday evening.