ONE of the biggest games in English football takes place this Sunday as an in-form Manchester United travel to London to take on Premier League leaders Arsenal.

The Red Devils are coming into this match on a hot streak, having beaten champions Man City 2-1 in a dramatic Manchester derby at Old Trafford a week prior. 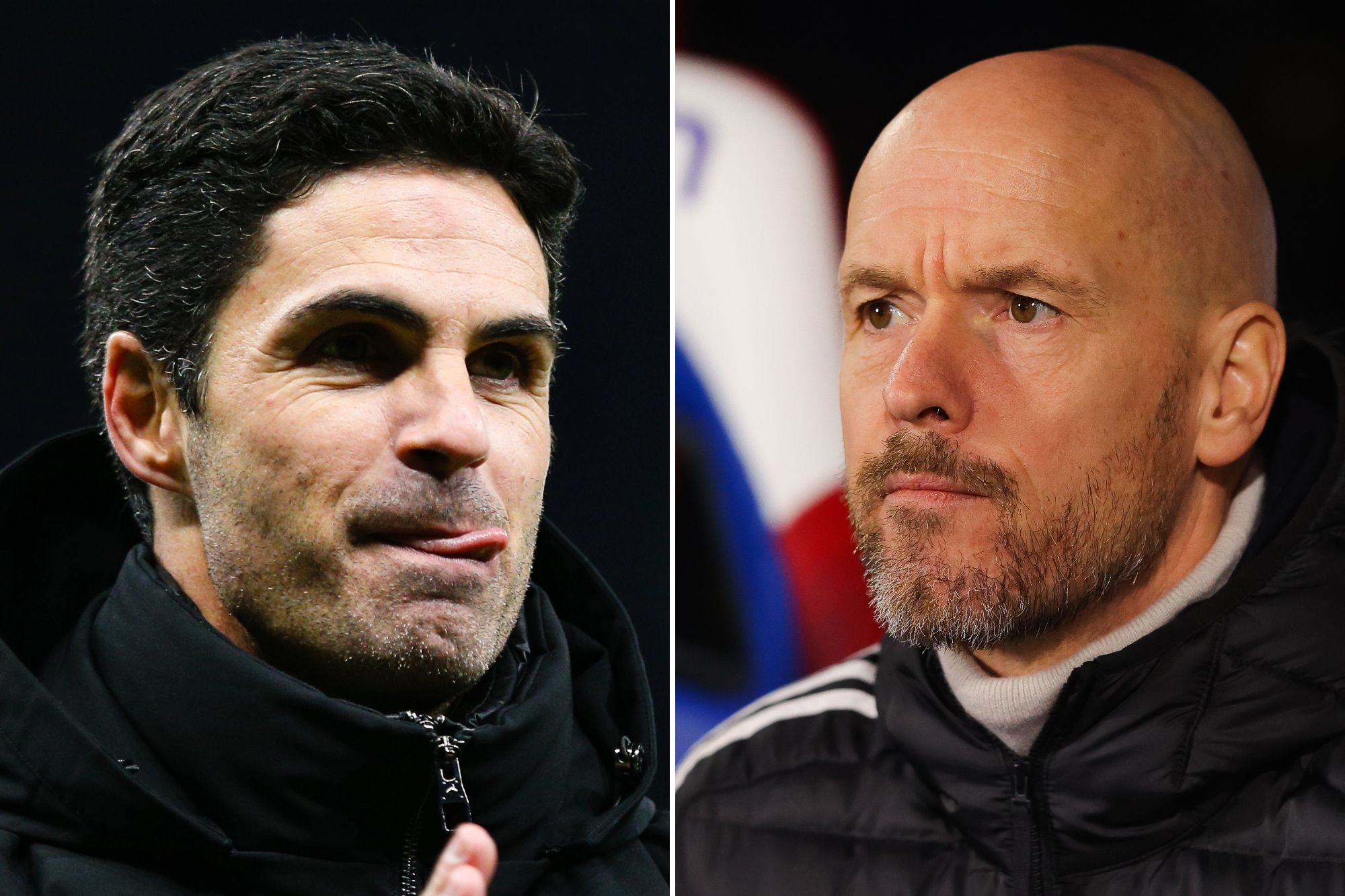 A 1-1 draw at Crystal Palace on Wednesday is certainly disappointing for United but the side’s unbeaten run still stands at ten games now.

Meanwhile, the Gunners triumphed in their own derby, defeating Tottenham relatively comfortably 2-0.

That extending their lead at the top to eight points from City before Pep's team clawed it back to five with their own win over Spurs on Thursday.

The gap between Arsenal and United currently stands at eight points but a victory for Erik ten Hag’s men will bring them right back into the title race. 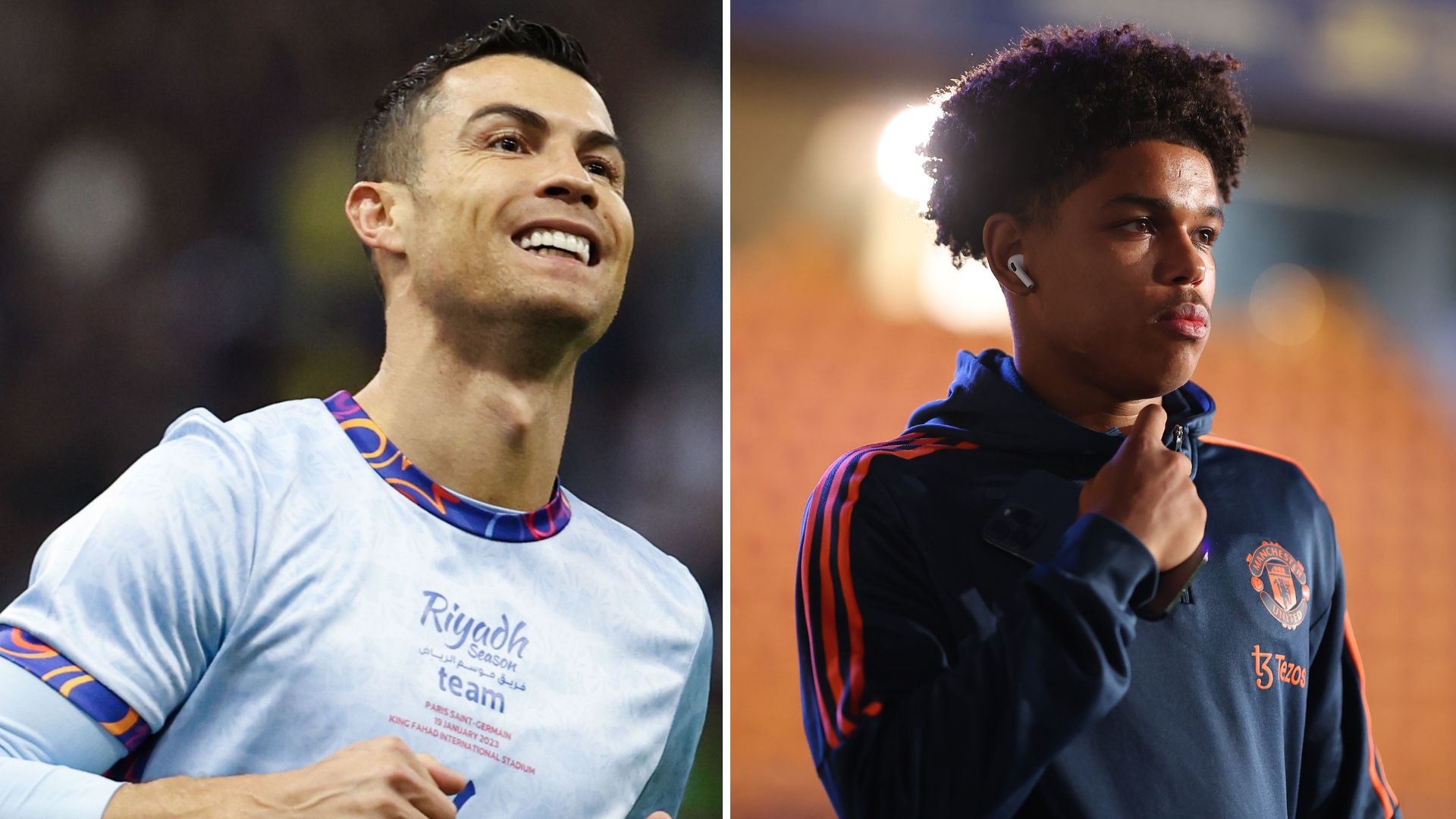 However, it certainly won’t be an easy task.

Mikel Arteta’s side have lost just one league game all season. To whom? That’s right, Manchester United.

Arsenal have a tricky run of fixtures coming up over the next two months and a first home defeat of the season in the Premier League could spell the beginning of a wobble.

The 13-time English champions have cruised through the season relatively unscathed due to their own superior quality, but this consistency may be tested on Sunday.

On the flip side, Man United look to be punching above their weight at the moment, with many believing that a title charge is far beyond their means right now.

Defeat in London this weekend could bring the Mancunian giants back down to earth.

With the clash of the titans edging ever closer to kick-off, we have decided to break down three key tactical battles to keep an eye out for over the course of the match. 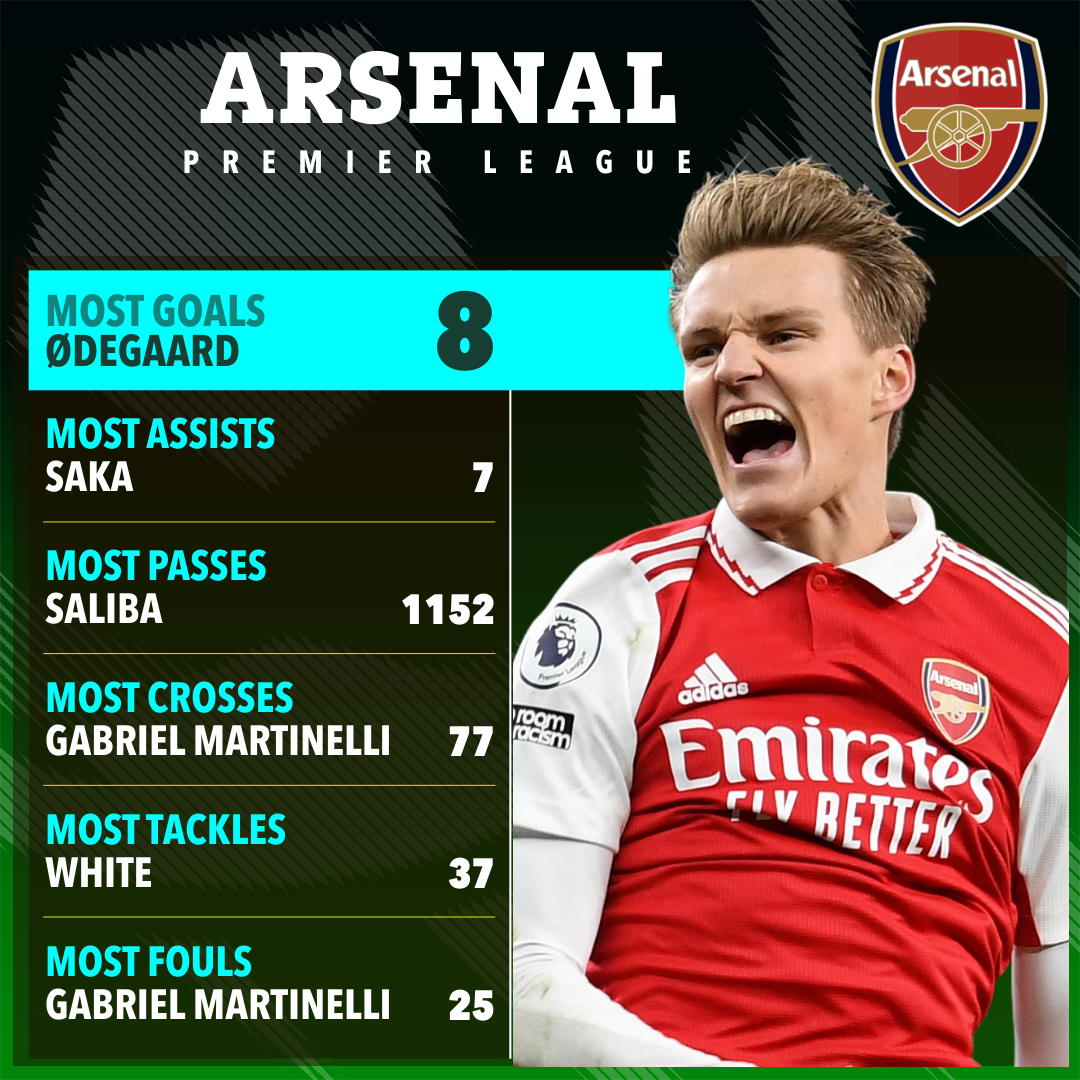 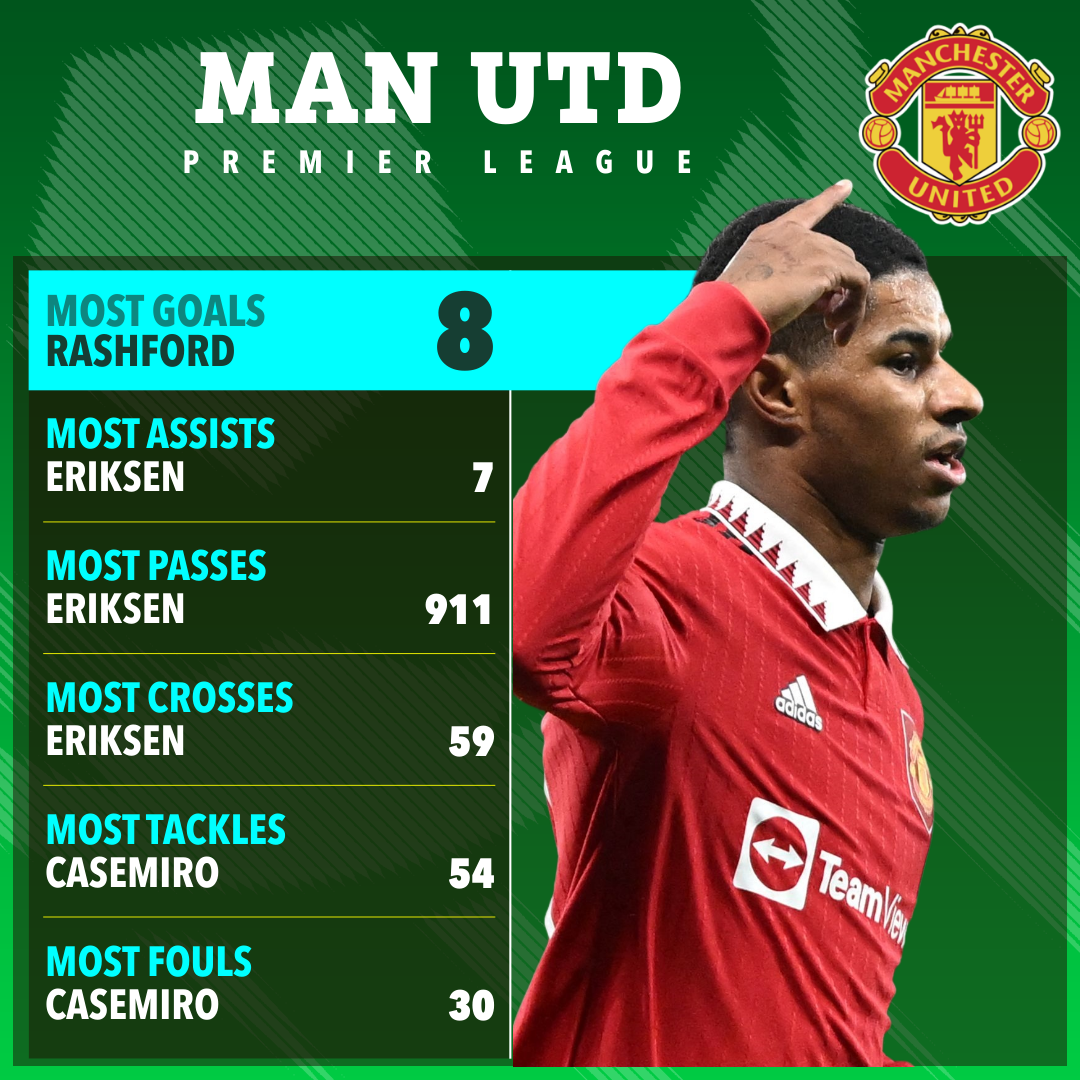 Several decades ago, a manager would give a player a man to mark, and this wouldn’t change throughout the match.

Since most sides used a 4-4-2, players were tasked with marking their opposite numbers. However, defensive systems have matured with time.

In an age where players move all over the pitch and rotate positions on the field, simple man-marking strategies have become obsolete.

Even Marcelo Bielsa, one of the very few renowned coaches in world football that still use a man-oriented system all over the pitch, has adopted a version of the style better suited for the modern age.

This is where all ten outfield players form a shape on the field, like a 4-4-2 or a 5-3-2, and remain compact, limiting space between the lines. 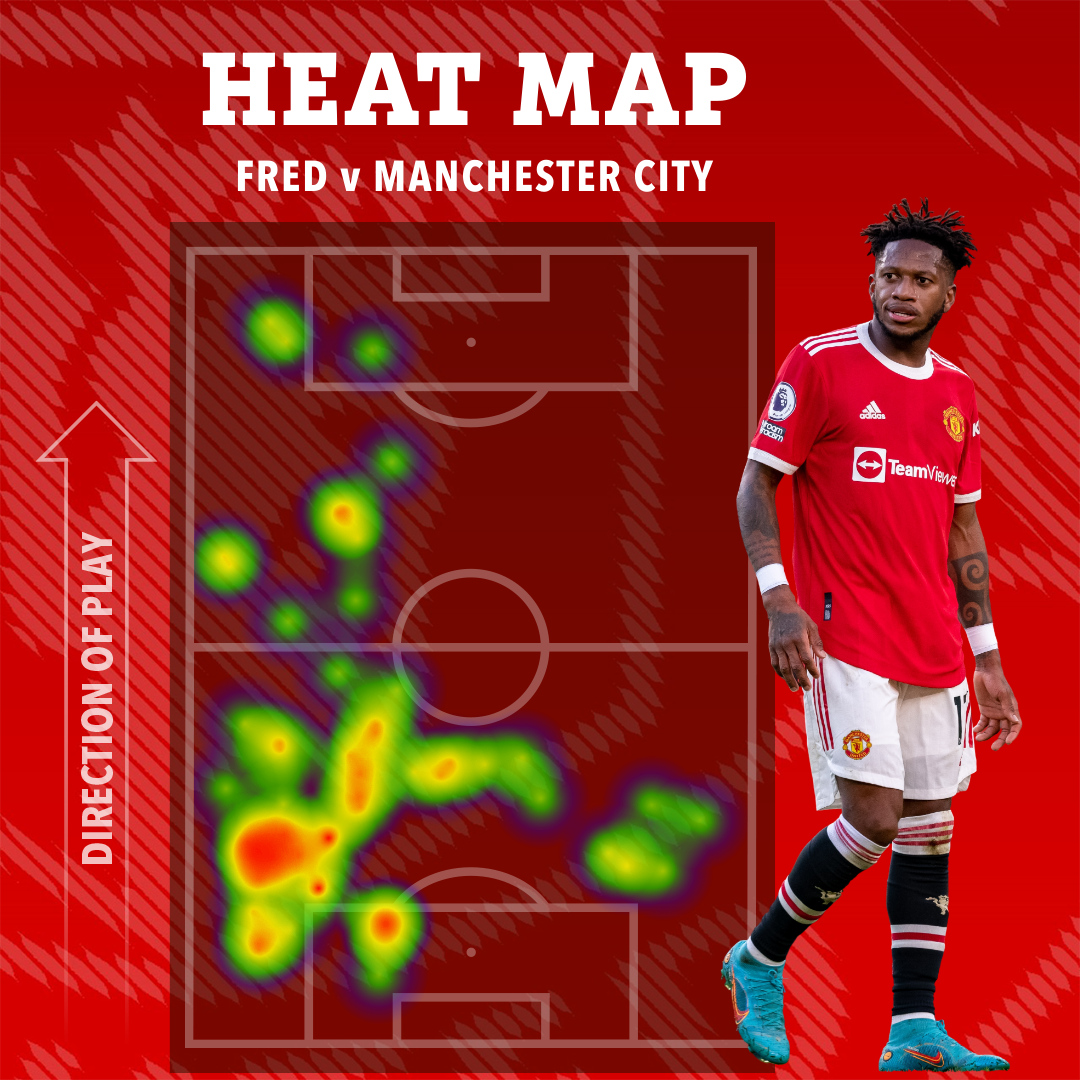 Nobody has a set player to mark. Instead, players defend zonally, applying pressure to any opposition player that moves into their own zone.

Erik ten Hag is no innovator regarding defensive systems.

Manchester United have always defended in a zonal block during his time at Old Trafford.

However, against Manchester City on Saturday afternoon, the Dutchman tweaked things slightly.

City are the masters at breaking down zonal blocks, always looking to have an extra man in certain zones so that the defending team are outnumbered.

Knowing this, ten Hag used his midfield to man-mark City’s trio of Rodri, Kevin De Bruyne and Bernardo Silva in the middle of the park. 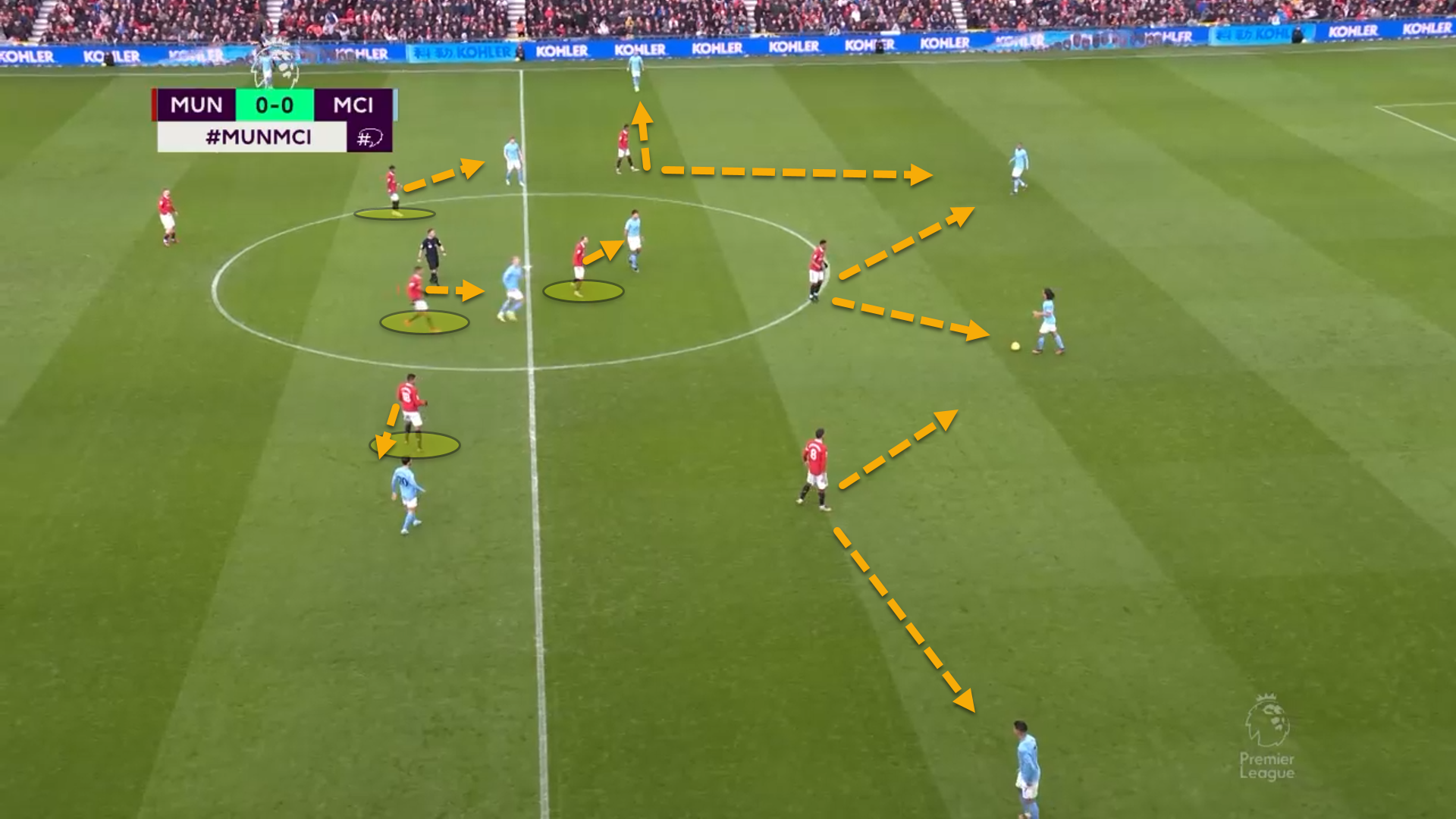 On top of this, full-backs Tyrell Malacia and Aaron Wan-Bissaka were instructed to go 1v1 with Riyad Mahrez and Phil Foden with little to no cover which was a bold move by Ten Hag but a risk that paid dividends.

United defended in their typical 4-2-3-1 block but everyone apart from the front three and Luke Shaw had a specific man to mark, making the system a mix of man-marking and zonal marking.

But what’s more interesting is that this wasn’t the first time that the former Ajax boss opted to go with a mix of these two defensive schemes this season.

Back in September, when the Red Devils put Arsenal to the sword at Old Trafford to win 3-1, Ten Hag set his side up in an identical manner. 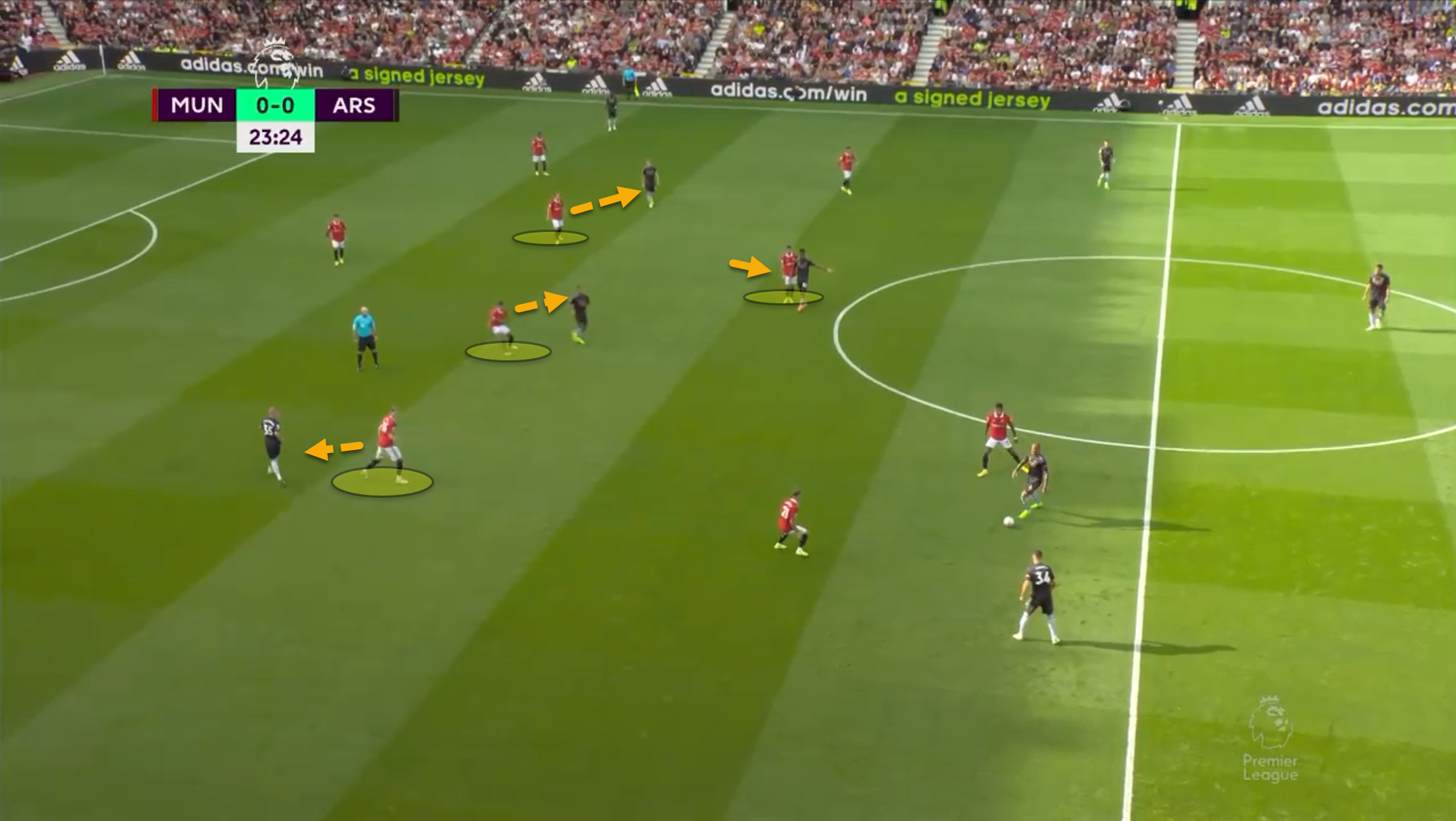 The only difference was that Lisandro Martinez was the man-marking centre-back against Gabriel Jesus as opposed to Varane versus Haaland last weekend.

Given that it worked so well against the Gunners the last time out as well as in the derby just over a week ago, United will likely go with the same approach to stop the league-leaders by going man-for-man in many areas of the pitch.

While the latter coach did attempt to adopt a more possession-based style in his final 18 months, there is no denying that United’s most dazzling and destructive football came from rapid transitions from deep.

Having sustained possession was where United struggled the most under the Norwegian and many fans and pundits alike criticised his laissez-faire tactics in the final third, relying on individual brilliance to break down opponents.

The English giants are much better as a unit during long spells of having the ball and have a clear idea of how to break teams down.

However, Man United’s counter-attacking prowess has remained as part of the side’s tactical DNA and Ten Hag has used this to his advantage this season.

United have been blissful to watch on the break at times and one of the club’s main assets to spearhead this has been Marcus Rashford.

The England international is rapid and plays his best football when running behind the opposition’s high defensive line, cutting in from the left.

With United having some wonderful passers amongst their ranks including Casemiro, Bruno Fernandes and Eriksen, the objective is always to look for Rashford running down the left channel once possession is turned over. 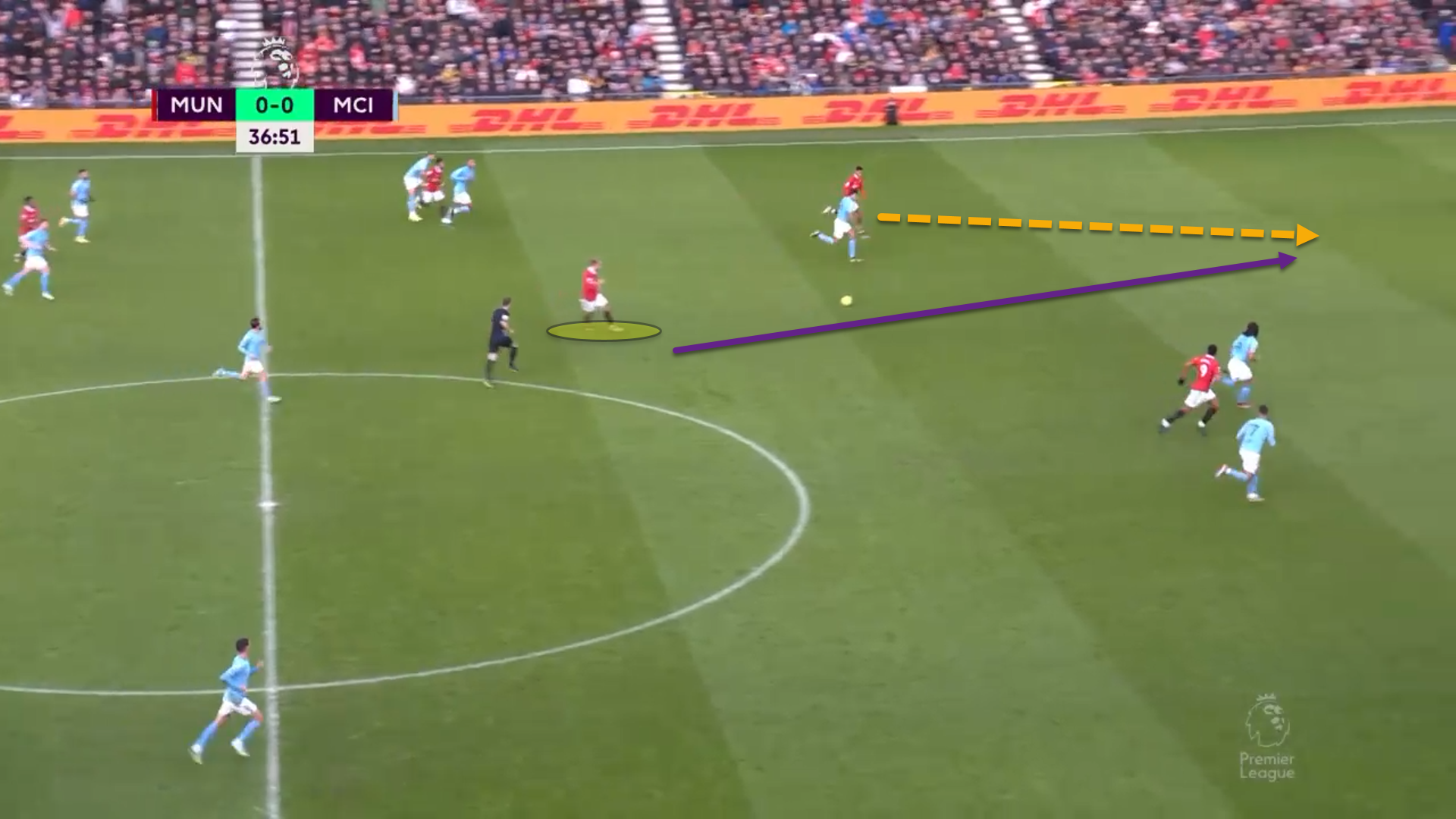 Since attacking teams push their full-backs extremely high in this day and age, Rashford can get himself into some excellent goalscoring positions by using his speed to exploit the space where the wide defenders generally would be.

Man City suffered greatly in the first half once Rashford made these sprints down the left in transition with Kyle Walker out of position.

Arsenal are no different to City with respect with how high up the pitch Arteta wants his full-backs to play.

When the Gunners are in the final third, both full-backs form one corner of a wide triangle as Arsenal look to break down their opponent’s defensive block.

Once possession is turned over, the wide defenders stay high, helping to counterpress in order to win the ball back as close to the goal as possible. 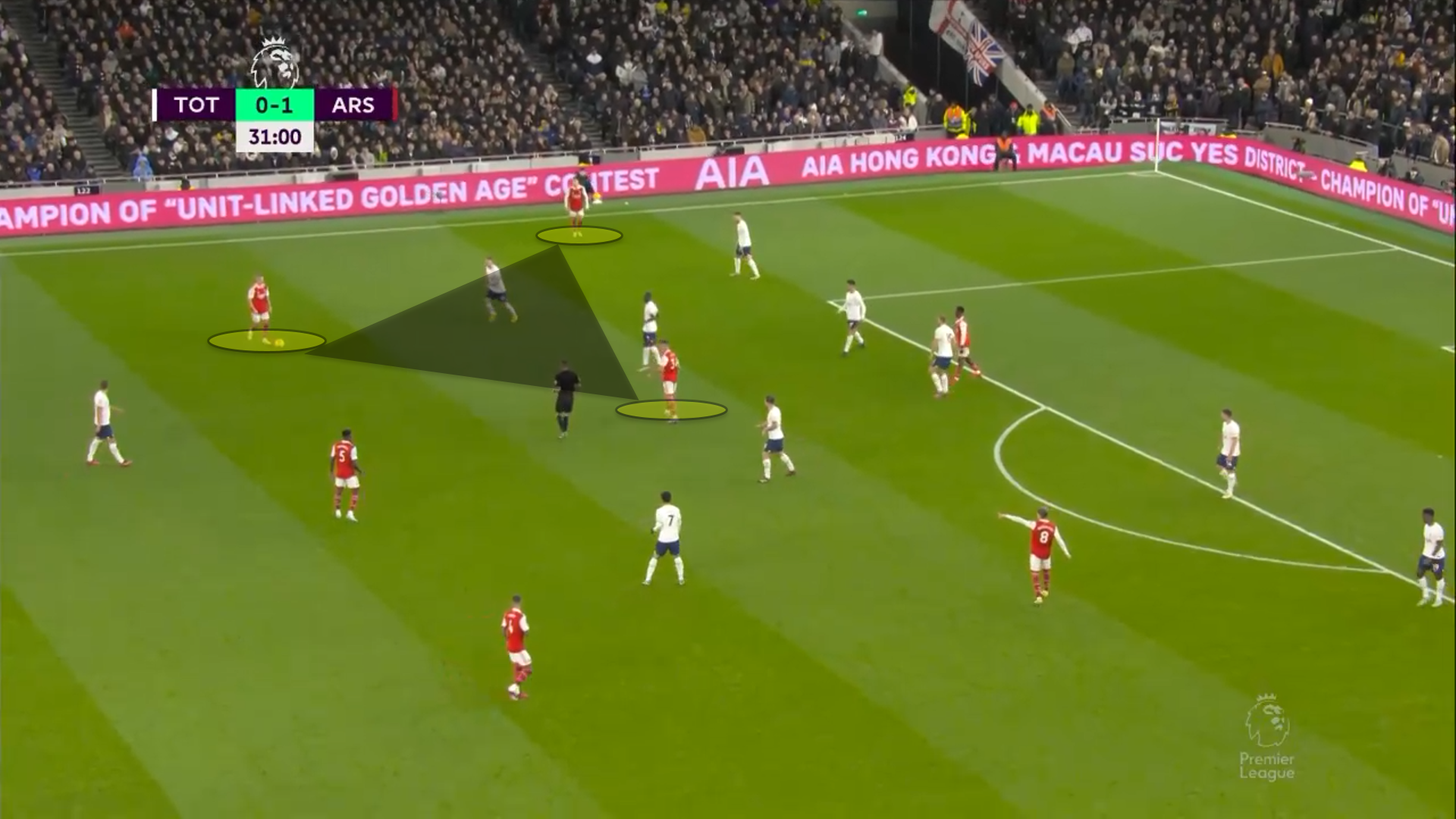 Nevertheless, this means that there is a possibility for the attacking side to hit the London club on the break, using the open wide areas to get closer to goal.

Man United will certainly use this to their advantage, especially with the pace of Rashford, and potentially Alejandro Garnacho, Antony or even Jadon Sancho depending on who is deployed on the right.

Ten Hag has improved a million and one things about Manchester United since taking over during the summer but there are still issues that the team faces.

One of these is that the Reds can often struggle against an intense high press.

Man City showcased more than any other side during the derby at the weekend.

United have become much more adept at playing out from the back during the Dutchman’s reign.

Players are becoming more comfortable and patient in possession, slowly progressing up the pitch to reach the final third.

However, over the course of United’s incredible run of form since November, most opponents have preferred to sit off and allow Ten Hag’s men to have the ball in their own half.

This changed against City.

Pep Guardiola has never been a coach to allow the opposition to have the ball for long spells at a time.

The serial winner wants City to be on the front foot, even without possession, harassing their opponents into submission to win the ball as close to the goal as possible.

This is exactly the approach that the Premier League champions adopted in the derby. 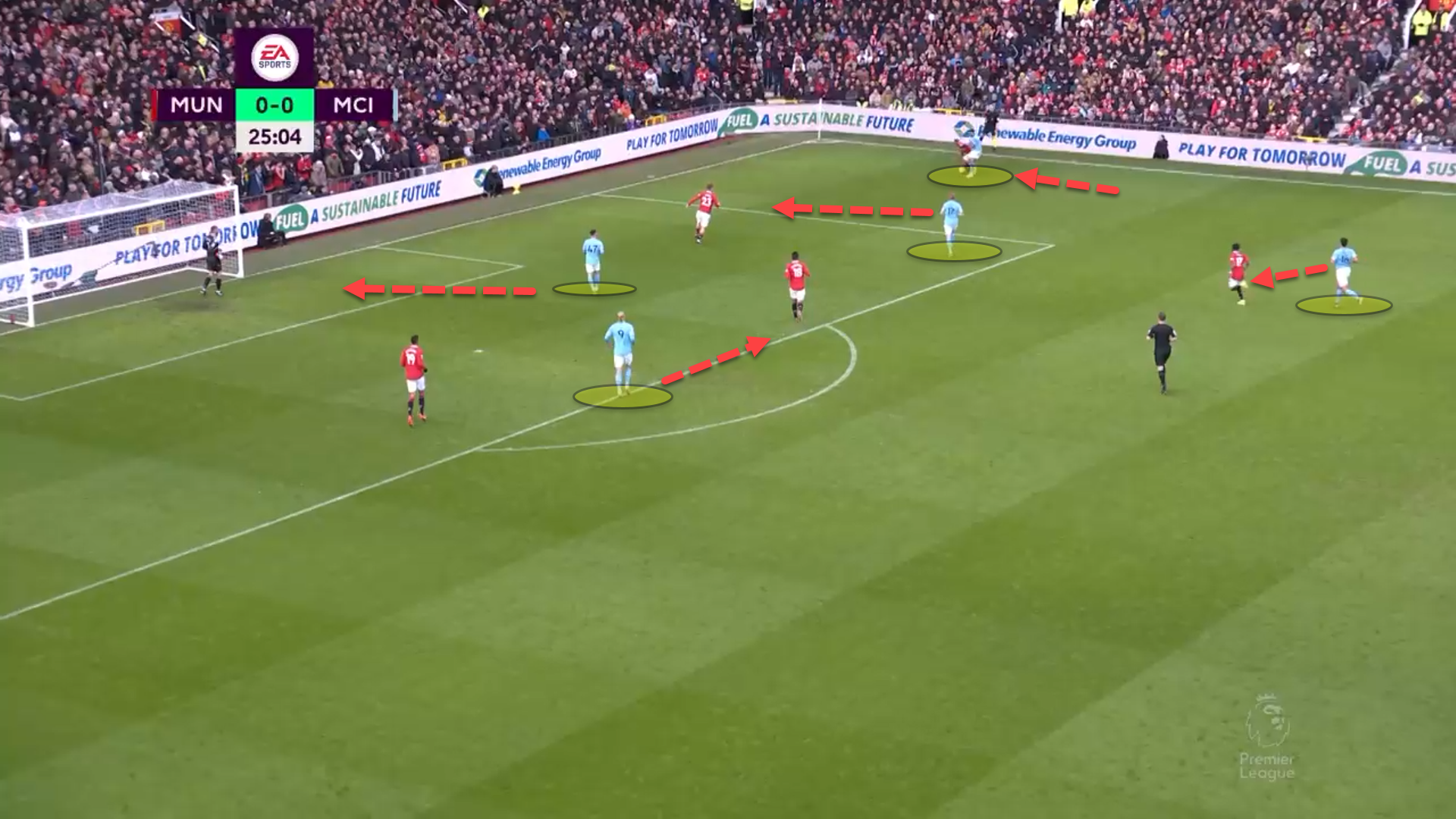 United found it uncomfortable to play out from deep and City forced the hosts into playing countless long balls to Anthony Martial which were easily defended by the backline.

Having worked under Guardiola for several seasons at the Etihad Stadium, Arteta has instilled a similar tactical style into his own team to press intensely and with purpose.

The Gunners like to force their opponents to one side of the pitch and go man-for-man in the wide areas, making life hell for the team in possession, often causing a turnover of possession. 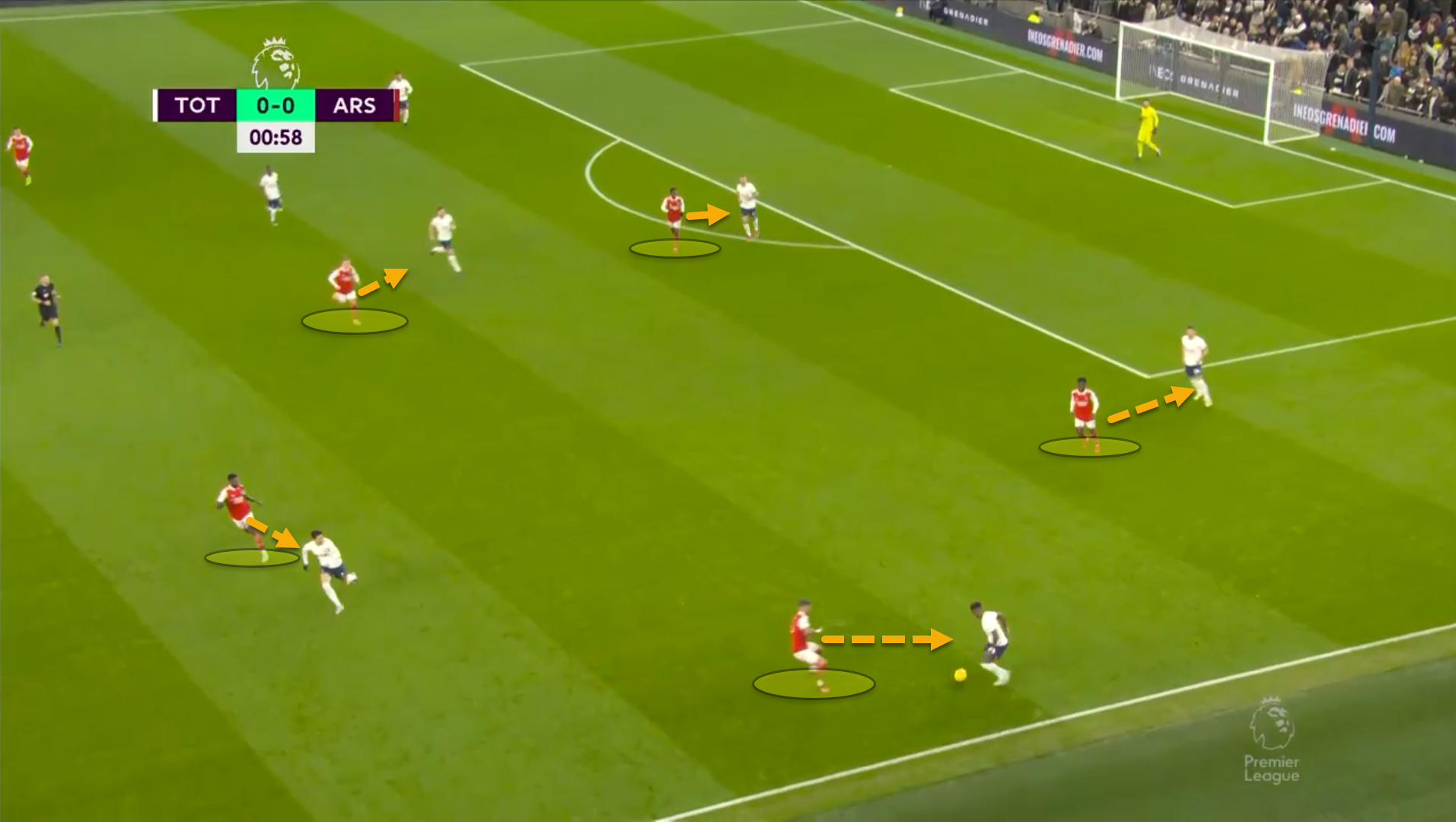 Arsenal will use this exact same pressing pattern when Manchester United come to town this Sunday and can certainly cause problems for the Red Devils, especially if Martial starts.

The Frenchman is a superb technician on the ball but isn’t strong enough to compete in the air with titans such as William Saliba and Gabriel.

If Wout Weghorst starts for United, this may not be as much of an issue.

Perhaps Ten Hag will feel that keeping the Dutchman in the fold is his best option despite a relatively underwhelming debut on Wednesday night against Crystal Palace.

So what does this all mean?

Arsenal are in cruise control right now. However, a defeat against Man United could have Arteta’s army looking over their shoulder in disarray.

Very few believe that United are strong enough to win their 14th Premier League title, but many said the same after the Gunners got off to a flier back in August, yet here we are.

After coming out victorious in the Manchester derby, a win at the Emirates would not be unthinkable for Ten Hag.

Even a draw may be enough to keep United in the conversation.

Nonetheless, Arsenal will be hungry for revenge after the defeat at Old Trafford back in September and will want to bury their opponent’s title charge before it grows legs.

Regardless, with two master tacticians in the dugout and a plethora of world class talents on display, this has the potential to be one of the games of the season.