Novak Djokovic came to Australia trying to become the greatest player in the history of men’s tennis. He will leave under armed guard as an undesirable alien and toxic icon of the anti-vax movement.

For all Djokovic’s talents with a racquet and more than $200 million in tournament prize money he has banked over his world-beating career, he has amassed a much larger fortune in endorsements. And herein lay the rub for him in Sunday’s dramatic hearing before the full bench of the Federal Court. 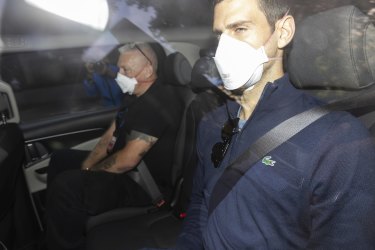 Novak Djokovic arriving at his lawyer’s office before his court hearing. Credit:Paul Jeffers

Just as Djokovic’s name and globally recognisable face has been used by corporate sponsors, his image has now been co-opted, albeit without his permission, by anti-vax activists who believe, like him, they shouldn’t be forced to have the jab.

He hasn’t signed a contract with the anti-vax mob and, for nearly two years, has never openly supported their ideas. But, as far as Immigration Minister Alex Hawke and his government is concerned, the GOAT [greatest of all time] is now a pin-up boy for a corrosive and dangerous cause.

Twice in Sunday’s court hearing, the Australian government through its senior counsel Stephen Lloyd, SC drew an analogy between Djokovic flogging cars, fancy watches and alligator T-shirts and promoting, through his mere presence here, a reckless message that might lead to more sickness, misery and ultimately, death.

“He has now become an icon for the anti-vaccination groups,” Mr Lloyd said. “People use high-level athletes to promote ideas and causes all the time. The applicant himself no doubt has many advertising arrangements with different clients. I am not saying this is advertising but his connection to a cause, whether he wants it or not, is still present.

“Rightly or wrongly, he is perceived to endorse an anti-vaccination view.″⁣

The notion that a regular visitor to Australia not accused of breaking any laws here can be lawfully deported for what others perceive to be his opinions may come as a shock to those who watched the livestream of these proceedings around the world, including in Djokovic’s home country of Serbia.

Liberty Victoria president Mike Stanton tweeted during the hearing: “Deportation of a person because of a purported risk as to how others might perceive them and then act sets a terrible precedent.”

Djokovic joins an inglorious roll call of Holocaust deniers, convicted criminals and political extremists who have all crashed against Australia’s cold, hard border.

The federal Parliament changed Australia’s migration laws eight years ago to make it easier for the Immigration Minister to deport people. To lawfully cancel Djokovic’s visa, Alex Hawke needed only be satisfied that his presence might agitate the anti-vax mob, not be convinced that it would. 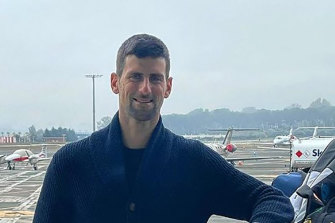 Happier times: Novak Djokovic published this Instagram post of himself preparing to travel to Australia on 4 January.Credit:Novak Djokovic/Instagram

As strong as Djokovic’s defences are on a baseline, his legal team was at long odds to prevent the government from easing over such a low bar. Djokovic’s next challenge will be to plead for special consideration to be allowed back into Australia and his favourite major tournament within the next three years.

That assumes he ever wants to return.

Djokovic’s counsel Nicholas Wood SC argued that the evidence supporting the notion that his client’s presence would undermine the pandemic response was comically thin, based largely on a BBC report of what Djokovic said about vaccines nearly two years ago, some of his bizarre ideas about mind power and a conspiratorial Instagram post by his wife.

For 11 months of the year, Djokovic travels the world to play tennis and nearly always wins wherever he goes. Where was the evidence that his presence in any other country had fuelled anti-vax rallies?

Mr Lloyd responded that Djokovic’s actions, rather than his words, spoke loudly enough. “Djokovic had made a choice not to be vaccinated. That choice made clear his view about COVID vaccination.”

Djokovic’s best chance of winning this case was Mr Wood’s argument that the Minister needed to properly consider not only the implications of Djokovic’s presence in Australia on anti-vax sentiment, but what would happen if the government used its coercive powers to detain and deport the Serbian star.

This criticism – a failure to consider the unintended consequences of blinkered decisions – has been a common refrain about Australia’s response to the pandemic. Chief Justice James Allsop said this was the question he chewed over during lunch.

“One could see a situation where it was plain to anyone with common sense that cancelling the visa would cause overwhelming public discord and risks of transmission through very large public gatherings,” the Chief Justice mused.

But Mr Lloyd said the question wasn’t something that the court, or the government, needed to concern itself with. “The Commonwealth ought not, in the public interest, be obliged to suffer the presence of an alien merely for fear that their non-presence would incite some adverse reaction.” 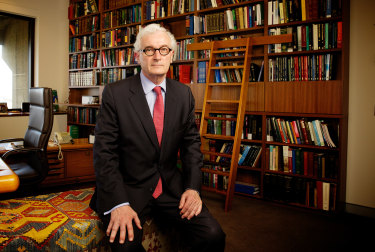 What happens next we will likely know by Tuesday. As the panel of judges deliberated on Djokovic’s fate, anti-vax activists used their usual social media channels to promote another planned “freedom” rally that day.

By then, though, Djokovic will be back in Serbia or his adopted home in Spain, his Australian summer at an end, his reputation trashed and his legacy diminished.