Silva is, both in private and in public, a quiet soul. He does not court the limelight — he consents to only one regular interview opportunity a year, a brief chat to promote tourism on the Canary Islands, where he grew up, in which he does his best to say nothing — or especially enjoy being the center of attention.

With Foden’s mother, Claire, though, he was effusive. He told her what a pleasure it was to train alongside her teenage son, and enthused at the prospect of just how good a player he thought Foden could become.

Less than a year after Foden had made his debut for City, Silva said he was already convinced that the 18-year-old had the potential to go on to be one of the best players in the world. His only hope, he told her, was that she might ask her son to “wait a couple of years” before blossoming. “Just to give me a chance,” he said. 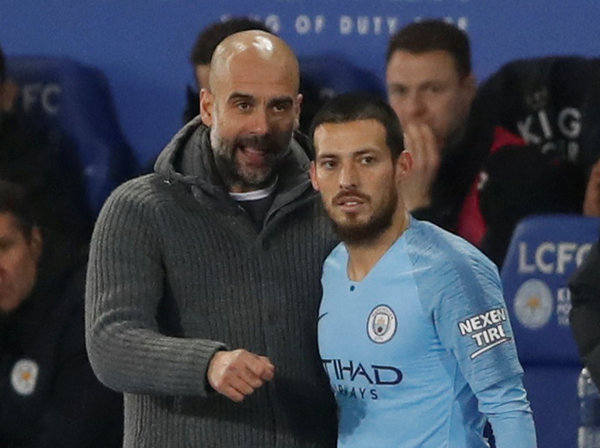 There is a timeless quality to Silva. He turns 33 next week, but still seems the player he was when he first arrived in Manchester almost nine years ago. He is no less sharp, no less lively, no less fluent: “always in motion,” as his one time Spain teammate, Javi Martinez, once said. He still wears his brilliance lightly. He still sees no need to indulge in ornament or ostentation. His is a genius for simple things, done to perfection.

To his coach, Pep Guardiola, Silva is a “joy” to work with; to his teammates, as Kyle Walker put it, he is an “example.” He has been a central figure at City ever since he arrived in 2010, but if anything he is even more integral now, charged with knitting together all of the complex passing patterns Guardiola has drummed into his players.

It is no surprise that it was in his absence — as well as that of Fernandinho, another of City’s old stagers — that City lost to Crystal Palace and Leicester City, offering Liverpool daylight at the summit of the Premier League, and turning the two teams’ meeting at the Etihad Stadium on Thursday into a game Silva and his teammates must win. “If we drop points, it’s over, almost impossible,” Guardiola said this week.

Even City, with all its resources, lacks something in Silva’s absence. “He is one of the most incredible players in the world at playing in the pockets,” Guardiola said of his playmaker earlier this season. “He is maybe the strongest in the world in those spaces. We try to attack those spaces: he is a master of it. Few players can do it.”

Silva’s talent is not his only source of influence: around the same time he was greeting Foden’s mother, Silva presented each of his teammates with a personalized Nintendo Switch console, inscribed with their initials, and two games. Silva is not much of a gamer himself, but he knew many of the younger players are; he felt the chance to play alongside and against each other might help the team bond on away trips.

The gesture was not advertised or announced to the team: the gifts came as a surprise. Silva made it as he plays a pass: with delicacy and discretion, not for its own sake but toward a greater goal.

Those are the traits on which he has built his career, that have led him to a World Cup title, two European Championships and three Premier League titles. But they are the characteristics, too, that may stop him from receiving the individual recognition he perhaps deserves.

Roberto Mancini, one of Guardiola’s predecessors at City and the manager who brought Silva to England from Valencia in 2010, always regarded his playmaker as the equal of Xavi and Andres Iniesta. “If he had gone to Barcelona” in 2008, Mancini said, “everyone would be saying he is one of the best players in the world.”

Silva has rarely — if ever — been mentioned in that conversation, even in dispatches. Indeed, remarkably, in nine years in England he has only once — back in September 2011 — managed to be voted the Premier League’s player of the month. He has won that award as often as such luminaries as Nikica Jelavic, Adam Le Fondre and Connor Wickham. He has, needless to say, never been voted the country’s player of the year.

And yet there is a case to be made that Silva ranks not just among the finest players of this Premier League generation, but among the greatest-ever imports into English soccer.

True, he cannot match the transformative effect Eric Cantona had on the game when he arrived — first at Leeds United, in 1992, and then at Manchester United — and true, he has not scored as frequently or played as explosively as the likes of Thierry Henry or Didier Drogba.

He may not be as decorated as Peter Schmeichel — who picked up five Premier League titles at Manchester United — or produced as many moments of jaw-dropping wonder as Dennis Bergkamp. Unlike Cristiano Ronaldo, he has not led his team to the Champions League crown, or gone on to score more goals in that competition than anyone else.

There are other ways, though, to gauge greatness. Never mind that Silva has won more Premier League titles than Henry, and as many as Ronaldo and Patrick Vieira.

Much more significant is the fact that, over the last decade, nobody has created more goals in the Premier League than the elfin Spaniard; only two foreign players — Bergkamp and Cesc Fàbregas — have more assists in English history.

Never mind that he has lasted longer in the tumult of English soccer than almost any of his rival candidates (only Vieira remains ahead of him, for now). Far more important is that he has done so despite being adjudged, in some quarters, as too lightweight for the fray when he first arrived. Silva has — not uniquely, but more than most — changed the way the Premier League sees itself; he has played a role in ending the tyranny of the powerhouse. He has not just helped to define and refine the playing style with which City is now synonymous, but proved that small, technical players can thrive in England.

That he is so easily overlooked — when Alan Shearer nominated a player to enter that pantheon earlier this year, he went for Silva’s teammate, Sergio Agüero — is in part because of the person Silva is: shy, private, not given to grand public declarations of his genius.

But it is also because of the player he is. Silva does not pretend to be a great soloist; he does not play to the gallery or for his personal highlights reel. He is not especially quick or frighteningly strong or ruthlessly prolific.

He is, instead, an embodiment of that old Guardiola maxim: he takes the ball, he passes the ball. The better he plays, the brighter others shine. It has been easy to lose sight of him, a player who seeks nothing but to be part of the collective, but he has always been at the heart of it.

It is hard to tell, but he is slowly descending from the peak he has occupied for almost a decade. Even he thinks he has just a couple of years left before he is replaced. He may be right: Foden may go on to be one of the best in the world. Silva, though, will prove a tough act to follow.