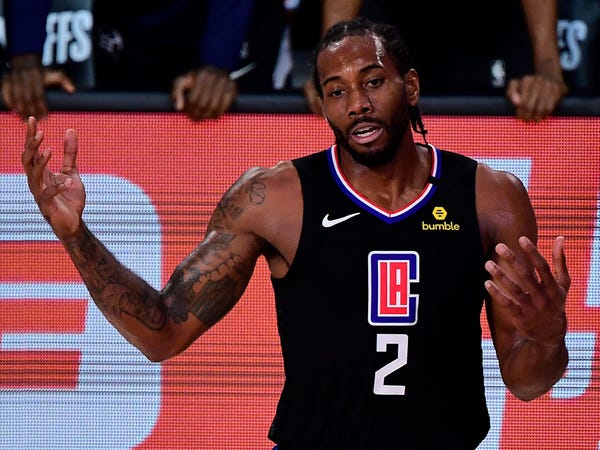 The Los Angeles Clippers completed their collapse on Tuesday night, losing to the Denver Nuggets in Game 7 of the Western Conference Semifinals to blow a 3-1 lead in the series and cost themselves a shot at the NBA title.

Kawhi Leonard and Paul George, the two superstars meant to carry the Clippers to greatness, completely disappeared in the fourth quarter of the must-win game and finished the night with just 24 points between them.

On Twitter, fans had plenty of jokes to make at the Clippers expense, but none were sharper than the shots that were fired from the Portland Trail Blazers.

And CJ McCollum got his shots in as well.

The bad blood between the Blazers and the Clippers runs deep. Lillard famously sent Paul George home with his walk-off buzzer beater in the 2019 playoffs when George was still with the Thunder. Then in the 2020 postseason, the Clippers were seen mocking Lillard after he missed two free throws that wound up costing the Blazers a late win in the regular season. After that game, Patrick Beverley hit Lillard with a "Cancun on 3" in the Instagram comments.

On Tuesday night, the Blazers would get the last laugh, at least with regard to Twitter jokes.

Lillard and McCollum were far from alone in their online bashing of the Clippers. Having blown a 3-1 series lead, a roasting was in order, and NBA Twitter was ready to deliver.

Even Magic Johnson, known for his hilariously harmless nature on Twitter, got in on the action at the Clippers expense.

Congratulations to the Denver Nuggets on their spot in the Western Conference Finals. As for the Clippers, at least they now have the whole offseason to recover from Twitter's devastating burns.