John Marshall was remembered at Randwick on Boxing Day in the way he would have liked – jockeys wore black armbands in the Summer Cup and it was quiet and respectful, like the man himself.

A great of the saddle who Darren Beadman modelled himself on as a young rider, Marshall died on Sunday aged  60 after a battle with pancreatic cancer. 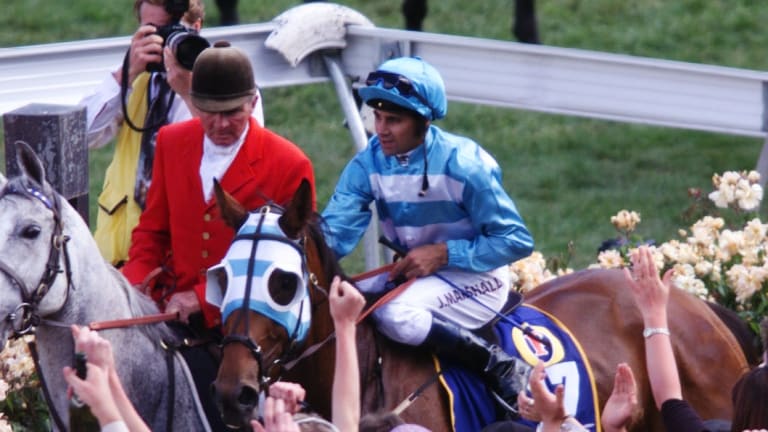 “His nickname was BP – the quiet achiever,” Beadman said. “He was one of the guys when I was coming through you would look up too.

"His advice was always smart.”

Marshall made his name riding  Bart Cummings-trained greats from Shaftesbury Avenue to Saintly. He won an AJC Derby on Beau Zam and group 1s with Sky Chase and Campaign King, but  his crowning glory was   was  the 1999  Melbourne Cup on Rogan Josh.

His brother-in-law, Chris Barrett, who is the valet to Sydney's best jockeys these days, recalled that day as being  “so John Marshall”.

“He used to stay with me in Melbourne, but he had planned to go home and rang after the Cup and said where do I stay,” Barrett said. “I said to him they will put you up at the Crown.

“He said: 'I don’t want to stay there, everyone will think I’ve got my percentage there'.

“The next day he was at my place for a barbecue first thing. He liked it like that – no fuss.”

Marshall rode more than 2000 winners and retired a year after winning the Cup at the age of 42. By then he had achieved nearly everything, including winning a Sydney jockey premiership.

He lived his life away from the racetrack until son Taylor took out his licence as an apprentice jockey and he returned for racedays to guide him.

His fellow riders past paid their respects, and Racing NSW chief executive Peter V'landys spoke for the industry.

“John Marshall was an elite jockey, humble and a thorough gentleman,”  V’landys said.

“John competed with distinction in an era with an abundance of great jockeys and his combination with the legendary Bart Cummings was one of the most successful partnerships in racing."

Marshall is survived by his wife Deborah and their sons Lachlan and Taylor.