Pat Cummins has no desire to pinch the new ball off either Mitchell Starc or Josh Hazlewood and has backed his fellow pacemen after stinging criticism from Australian great Shane Warne.

While Cummins’ status and popularity has only skyrocketed after his excellent return of 9-99 at the MCG, the form of Australia’s opening quicks has come into sharp focus. 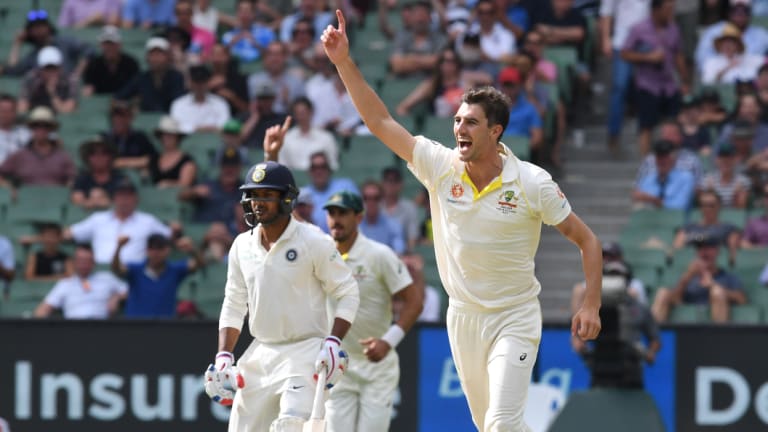 Flying high: Pat Cummins has been in brilliant form for Australia this summer. Credit:AAP

Starc (2-98) and Hazlewood (3-108) did not have the worst returns in the Boxing Day Test but some have questioned their recent potency against top orders across the world.

Against top six batsmen in 2018, Hazlewood snared 18 wickets at an average of 40, while Starc had a slightly worse return of 17 wickets at 47, which prompted Warne to label their numbers "not good enough".

“That’s not very good at all,” Warne said on Fox Sports' Cricket 360 program. “When sides have made 346, 488, 482, 443 … there’s a lot of scoreboard pressure on the batsmen to come out and make a decent score to try and get in there and not give up a big lead. I just don’t think they are bowling well enough."

By comparison, Cummins took 30 wickets at 23 against top six batsmen in 2018 and put his name up in lights again with career-best figures in Melbourne.

Speaking at Sydney Airport on Monday, a day after Australia’s 137-run defeat in the third Test, Cummins was quizzed whether he would like to take the new ball during the Sydney Test but said he had full faith in the opening combination at the moment and made it clear he felt their style of bowling should better utilised early in an innings.

“[I am] happy operating first change,” Cummins said. “Starcy and Joshy probably present a better seam and swing the ball a bit more than me so wherever they need me I am happy. I think they are doing a good job there.”

The fourth and final Test of the series kicks off on Thursday at the SCG and there will be plenty of interest over the coming days as to what pitch is served up by curators.

Both Sheffield Shield matches at the ground have been draws this season and Cummins is not tipping any major surprises in regards to the pitch.

“It’s probably what we expect from the SCG,” Cummins said. “We always want pitches with different characteristics and it just so happens [pitches this summer] might suit them more than our traditional fast, bouncy wickets. I guess you can’t have it both ways where you want every pitch to be different but you still want them all to favour you.

“We’ll see what happens. We’ve always got a pretty good record at the SCG.”

Twelve months ago Cummins featured in his maiden SCG Test and was named man-of-the-match after taking figures of 8-119 against England.

Cummins will return to his home ground with his chest out and hell-bent on ensuring Australia can level the series, even if India have already retained the Border-Gavaskar Trophy.

“I absolutely loved last year,” Cummins said. “It was my first Test at the SCG. [I] picked up man-of-the-match and had all my friends and family there and we won the series 4-0. I’ve got great memories there and I can’t wait to get out there.”

Aside from his bowling exploits, Cummins’ form with the bat has many believing he can be the genuine all-rounder Australia has craved for so long. His 63 in the second innings when the game was all but over was a tenacious knock that showed real character.

However, Cummins is more than happy wedged in between Tim Paine and Starc for the time being.

“I’m pretty happy at No.8,” Cummins said. “It’s a bit easier when I walk in and the bowlers have already bowled a few spells and the ball is a bit older. It’s a much tougher job at the top of the order.”