BREAKING NEWS: Cristiano Ronaldo WILL sign for Al Nassr ‘before the end of the year’, according to Spanish outlet Marca – insisting he’ll pocket a mammoth £175m-a-year in salary and advertising deals

Cristiano Ronaldo will reportedly sign a £175m-a-year deal with Saudi Arabian club Al Nassr before the end of the year, according to Marca.

The 37-year-old’s contract at Manchester United was terminated earlier this month after he slated the club in a bombshell interview with Piers Morgan.

Ronaldo – who is currently in Dubai – was linked with the Saudi Arabian club before the 2022 World Cup in Qatar but refused to comment as he was focused on the tournament. 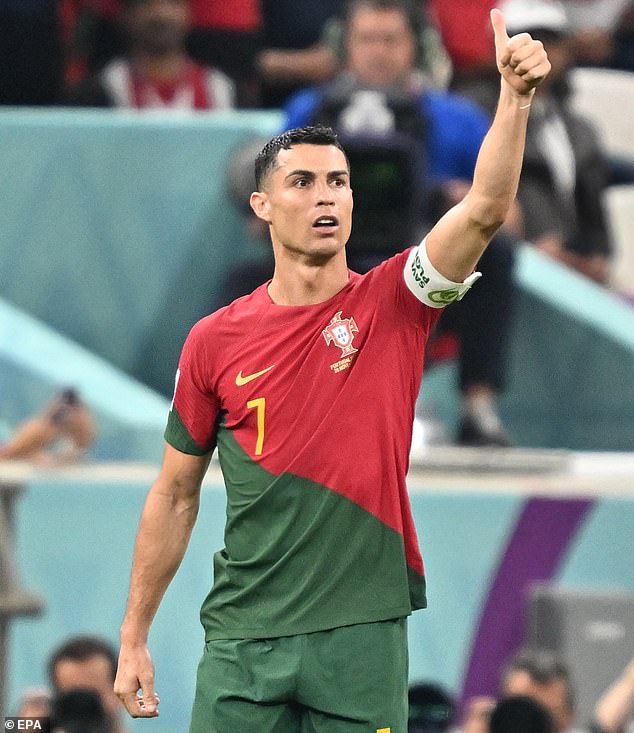 According to Marca, Al-Nassr want to sign Ronaldo before the end of the year and the 37-year-old is said to be waiting in Dubai while they confirm a deal.

The Portugal international rejected a switch to Saudi last summer, but without any firm interest from Europe’s elite clubs, he looks set to now make the move.

Al-Nassr are one of the most successful clubs in Saudi Arabia, having being crowned winners of the country’s top flight nine times, with their most recent triumph coming in 2019.

In both 2020 and 2021, Al-Nassr may not have won the league, but they did manage to win the Saudi Super Cup. However, they have struggled to make a splash on the global scene.

Although, they did compete in the Club World Cup in the 1999-2000 season. They played against one of Ronaldo’s former clubs, Real Madrid, and lost 3-1.

They went on to beat Raja Casablanca 4-3, but lost 2-0 to Brazilian side Corinthians as they missed out on a place in the knockout stages of the competition.

Al-Nassr are currently managed by Frenchman Rudi Garcia, who has previously coached Roma, Marseille and Lyon. They also play in a 25,000 seater stadium.

Ronaldo’s move comes shortly after his contract at Manchester United was terminated. He parted ways with the club after giving an explosive interview with Morgan that saw him criticise the club, Erik ten Hag and the Glazers.

His move also comes shortly after the 2022 World Cup in Qatar – where Ronaldo failed to full his dream of lifting the trophy with Portugal.

The 37-year-old came off the bench to replace Ruben Neves early in the second half with Portugal trailing 1-0 after Youssef En-Nesyri’s opener. However, he failed to inspire a comeback.

Ronaldo also squandered a late chance after drilling a right-footed effort into goalkeeper Yassine Bounou’s hands, which was among a string of failed Portugal opportunities.

Ronaldo was visibly upset after the game. The camera’s captured the Portugal captain walking off in tears.

Fans previously slatted Ronaldo on social media for being linked to the Saudi Arabian club. One fan tweeted: ‘Cristiano Ronaldo “Top Clubs want me, I’m still going to stay at the highest levels” About to sign for €200 million a season in Saudi Arabia. Like what! It’s like Messi going to America!! Ffs.’

Another added: ‘So much for Ronaldo wanting champions league football a contradiction.’ While, one wrote: ‘Money aside, Ronaldo is only going to #Saudi to score some easy goals so that his goal tally is falsely inflated so that he can beat Messi.’

Others said: ‘lmao Ronaldo fanboys… hope you guys go all the way to Saudi with him. Not still proven my manager wrong, not gotten a decent goal yet. Just a penalty’.