Cricket Australia has opened the door slightly to returning to play in Pakistan for the first time in 20 years, having softened its stance after an approach from the Pakistan Cricket Board.

New PCB managing director Wasim Khan has made it clear in several interviews that he is keen for international cricket to return to Pakistan as soon as possible. 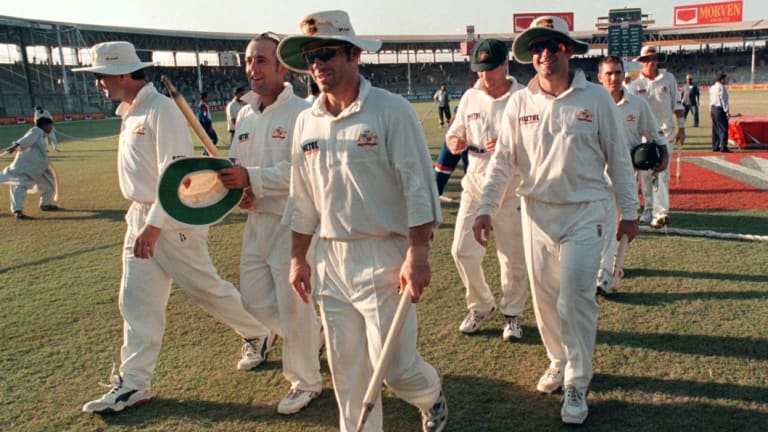 Australian cricketers walk from the field after drawing the third Test against Pakistan in Karachi, 1998.Credit:Reuters

Australia last toured Pakistan for three Tests and three one-day internationals under captain Mark Taylor in 1998. There has been little international cricket in the country since 2009 due to security fears.

However, with Australia due to play five one-day internationals against Pakistan in its surrogate home of the United Arab Emirates in March ahead of the World Cup, the PCB has again reached out.

Where CA has typically – and immediately – ruled out any approach to return to Pakistan, the governing body on Saturday was not as conclusive in an updated position.

Pakistan's plan would be to host the opening two matches against Aaron Finch's side, with the remaining three in the UAE.

Pakistan cricket has suffered as a result of having to stage home matches in the UAE, with attendances, as reinforced during the two-Test series against Australia in October, almost non-existent. However, there has been a softening from other countries.

Sri Lanka returned for a one-off Twenty20 in 2017, eight years after gunmen attacked a bus carrying its cricketers, injuring six players and killing six security personnel. The West Indies played a three-match T20 series in Karachi in April this year, while Australian Test captain Tim Paine, Ben Cutting and George Bailey were part of a World XI that played a three-match T20 series there in 2017.

One potential impediment is that the Department of Foreign Affairs and Trade advises Australians to reconsider travelling to Pakistan "due to the volatile security situation and high threat of terrorist attack, kidnapping and sectarian violence".

"Terrorist attacks can occur anywhere and at any time in Pakistan. Places frequented by foreigners are at particularly high threat of attack," it said.

The Australians toured a potentially volatile Bangladesh last year and were given presidential-style security.

In an interview with London's Daily Telegraph, Khan said Pakistan would provide any touring nation with "military-style security".

"It may well be small steps getting county teams touring and visiting the fantastic national academy. Could we get an MCC team to tour? Or could we have a small number of international matches to start with, rather than a whole series? Could teams play one or two one-day internationals on their way through to the United Arab Emirates?" he said.

"I appreciate countries have a lot of security issues but, with military-style security on offer, I am keen to understand where the gaps are so we can address them.

"It is interesting for me to get to the bottom of those things and see what I can influence and the conversations I need to have with other countries so we can understand what we need to do to ensure they can come back to Pakistan."