The most mesmerizing moment of Tiger Woods’s seismic 2019 Masters victory featured the intimidating stillness of a silent stare. Standing defiantly on the 12th green with arms folded across his chest during the final round, Woods glared pitilessly at his closest rivals.

Seconds earlier, Woods had shrewdly and conservatively traversed the tiny yet treacherous creek protecting the pivotal green, safely positioning his golf ball 30 feet from the hole. Rash and unwary, his playing partners, Francisco Molinari and Tony Finau, plunked their balls into the water. With an air of condescension, Woods walked alone up to the plateau green and, from the opposite side of the creek, looked down on Molinari and Finau as they dolefully dropped new golf balls — futile first steps in an unsuccessful rally.

By the time the players left the green, Woods was tied for the lead and on his way to a stunning victory.

Want to know if Woods, even after 19 erratic months, can defend his Masters title this week? The answer is in his knowing stare during the crucible of the 2019 tournament.

“It was a pure Tiger power moment,” Trevor Immelman, the 2008 Masters champion, said last month, recalling the scene. “It was the perfect example of how he uses his vast Masters experience. Tiger went to the green and looked back just to say, ‘I may be 43 years old, but I’m still the man around here.’”

Savvier about the secrets to succeeding at the Augusta National Golf Club than any other player in this year’s field, Woods has not only won the Masters five times, he has finished in the top five seven other times in his 22 tournament appearances. Even when his game is not sharp or when he competes after a long layoff from golf — or both — Woods has usually managed to contend at Augusta National.

There is no better example than the Masters of 2010, when Woods returned from a five-month exile necessitated by the scandal of his marital infidelities. Despite stinging rebukes from fans and from the Augusta National chairman at the time, Billy Payne, Woods stayed in the hunt until the final holes, finishing tied for fourth. 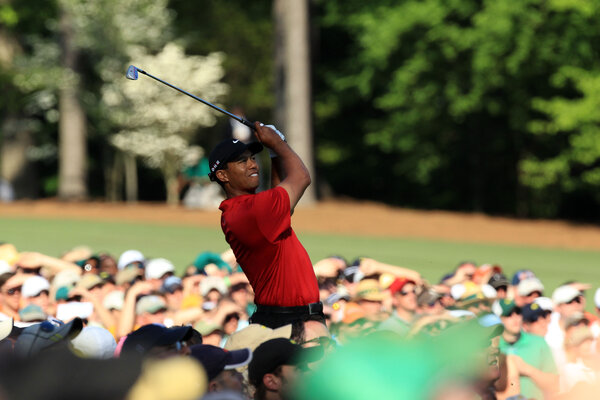 “I would never count Tiger Woods out at the Masters because he loves and knows Augusta so well, and that triggers very positive vibes,” said Bernhard Langer, who has won the Masters twice and tied for eighth at the tournament in 2014, when he was 56. “It’s that kind of place, and Tiger has 25 years of memories to draw from.”

But in a sports year unlike any other in modern times, Woods has been a far less daunting presence because of his balky lower back, which has been surgically repaired four times. Playing infrequently, Woods has turned in several sparkling rounds when his swing was fluid and his movements supple. But it has been just as common to see Woods limping 24 hours later, with one hand pressed against a back warped by reshaped bone and scarred tissue, toiling fruitlessly in pain.

In July, after one such uneven performance in consecutive rounds of the Memorial Tournament, Woods explained the hour-by-hour unpredictability of his back. That morning, he felt limber when he woke up, but a few hours later he was too stiff to take a full golf swing. “It’s going to happen more times than not,” he said and smiled.

This is Woods’s new reality, which includes the understanding that if he is going to win the three more major golf championships needed to tie Jack Nicklaus’s record total of 18, or match Nicklaus’s record six Masters titles, it will probably have to happen in the next few years.

With the clock ticking this season, Woods has struggled. In the six tournaments he has entered since the PGA Tour resumed in June after a three-month layoff caused by the coronavirus pandemic, Woods has not finished higher than a tie for 37th. In the five majors he has played since his 2019 Masters victory, he has missed the cut three times, tied for 21st and tied for 37th.

Nonetheless, his much younger colleagues on the PGA Tour, as well as his contemporaries in the champions-only Augusta National locker room, uniformly consider him among the favorites this week. So do online betting sites.

“The whole world saw what Tiger did in the final round last year when he methodically chased down every name ahead of him on the leader board,” said Gary Woodland, the 2019 United States Open champion. “It was proof of his talent but also showed the depth of his invaluable experience on that golf course.”

Since the Masters is the only major championship played annually at the same course, familiarity with the layout has always been a considerable advantage. In an interview late last month, Nick Faldo, a three-time Masters champion, said he thought the experience of playing in the tournament multiple times could be worth four to eight strokes across the four rounds of the event.

“Putts that appear to break two feet actually break eight feet, and a brilliant shot that lands one yard from the hole but on the wrong side of that hole ends up four yards over the green,” said Faldo, who will be an analyst for CBS at this year’s tournament. “Everybody tries to keep the ball below the hole, but when you’re 185 yards away that’s not always going to happen. So you better learn to be comfortable putting down slopes so steep your ball might roll back into the fairway. The mental strain you’re under is constant.”

Rory McIlroy, the world’s fifth-ranked player, said Augusta National’s challenges were so subtle they could not be explained but instead had to be experienced. The 14th hole, for example, is the only one on the property without a bunker, but its green is deceptively devilish.

“The putt up the hill on the 14th green is the slowest putt on the entire course,” said McIlroy, who added that few players realize how hard they must stroke the ball until they leave it 10 feet short of the hole two or three times.

Adding to the challenge this year will be a first: a Masters in November instead of in its traditional role as an April rite. Not surprisingly, Woods is one of the few leading players who has played multiple rounds at Augusta National in November.

“It’s been cold, the ball doesn’t go very far,” he said last month of those outings.

Also, from spring to fall, the prevailing wind tends to shift. “If you get the north wind that time of year,” Woods said, “it can be awfully difficult and long, and very different than what we normally play in April.”

In recent months, it has been obvious that cold weather exacerbates the fragility of Woods’s back, and that has only added to the belief that his window of championship greatness is closing.

“There will come a time when Tiger won’t be one of the favorites,” said Immelman, who is a CBS golf analyst. “However, I don’t think that time is right now. He still has different powers than the rest of us and an amazing ability to rise to the occasion regardless of the conditions.”

Phil Mickelson, Woods’s oldest major rival in the field, has wondered in recent weeks if the wind and chill of November might favor a golfer whose strength is precise iron play rather than length off the tee. Mickelson pointed to the 2007 Masters, which was played in squally weather and won by Zach Johnson, whose forte is accuracy and consistency.

It is worth noting that Woods finished second that year, two strokes behind Johnson.