SERGIO RAMOS has been told to ‘stay ready’ by Conor McGregor after jokingly calling out the UFC superstar.

The Real Madrid captain is not currently fit enough to play for Los Blancos – but it appears he feels in good enough shape to take on Notorious. 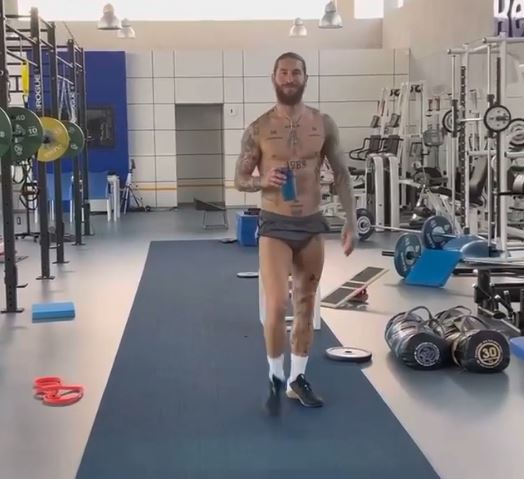 Ramos, 34, missed his team’s 2-0 Champions League defeat to Shakhtar Donetsk last night as he recovers from a hamstring injury.

He has been spending plenty of time in the gym while in rehab, and it has worked wonders for his physique, as his latest video proves.

Ramos posted a clip of himself walking topless and grinning following a workout and flexed his muscles towards the camera.

And the veteran defender cheekily taunted the Irishman by captioning his Instagram clip with: “When you're ready, @thenotoriousmma.”

McGregor, a two-weight world champ in the UFC, responded by telling Ramos: “Stay Ready, my brother Sergio! We have a big fight coming up.”

Notorious is currently preparing for his return to the octagon following his retirement U-turn.

Meanwhile Ramos has just been nominated as one of 11 players for The Best FIFA men's player award after leading Madrid to the La liga title last season.

The two sporting mega-stars have developed quite a friendship this year.

Back in July, McGregor shared a video of him enjoying a smoke while relaxing on a sun lounger on holiday.

He was holidaying in the south of France with partner Dee Devlin and their two children Conor Jr and Croia.

Bizarrely he tagged Ramos in the clip he uploaded to his Instagram Stories.

He captioned it 'What you reckon Sergio Ramos?' before adding the hashtag 'MoMoneyMoProblems?'.

That came just hours after Ramos shared a clip of him doing the 'Billi strut', after smashing a shot home during training.

The exaggerated walk is of course made famous by McGregor.

The Dubliner hailed his 'bro Sergio' after Ramos shared the clip and asked for McGregor's feedback.

And the fighter has since been invited to attend a Madrid training session by the Spanish World Cup winner as their friendship continues to blossom.