Before she throws her first punch in her title fight on Friday, the two-time Olympic boxing champion Claressa Shields wants sports fans to know that she is a tremendous babysitter.

Shields, who feels a bit underappreciated these days, said she wants to beat her opponents senseless, of course, but she insisted she is actually “super nice.” Like Mary Poppins but with a killer right cross, she has a magical connection with children and is a great role model, she said, and often takes care of her nieces and nephews.

She changes diapers. Reads books aloud. Hosts movie-watching parties. Orchestrates water fights in her backyard. Cooks macaroni and cheese from scratch with “actual noodles, almond milk and cheese,” which takes more than an hour. And when it comes to bedtime, she is a pushover, letting her charges stay snuggled in blankets on the couch — and out of their PJs — long past the final bell.

“I’m a nurturer by nature,” Shields, who will turn 26 this month, said on a video call last month from a kitchen in Florida, where she was whipping up scrambled eggs between workouts at training camp. “And I like dressing up and wearing makeup, but nobody ever talks about that.”

Shields, who is undefeated as a professional, is such a nurturer that she has taken it upon herself to care for the entirety of women’s boxing — and, frankly, herself. She wants her sport to flourish and it has bothered her that TV has neglected female boxers during the pandemic, while men’s boxing has suffered much less.

It drove Shields crazy that she was forced to all but beg networks to broadcast her next fight. After all, she is the self-proclaimed G.W.O.A.T., the Greatest Woman of All Time, with a résumé that makes the claim seem plausible. When the networks wouldn’t bite, she looked ever more fondly toward mixed martial arts. Women are treated much better in that sport, she said, and she plans to make her debut in it this summer.

Shields and Marie-Eve Dicaire, the unbeaten Canadian boxer whom she’ll fight on Friday for the undisputed super welterweight championship, have been ready to square off for a year, but none of the networks agreed to air the bout after Showtime postponed it in March because of the coronavirus pandemic, never rescheduling it.

Shields, who said she would have been paid $350,000 for that bout, took it personally that the networks then proceeded to broadcast men’s fights — but not hers. She had bills to pay, including the mortgage on the three-bedroom house she bought in her hometown Flint, Mich., that made her the first person in her family to own a home. 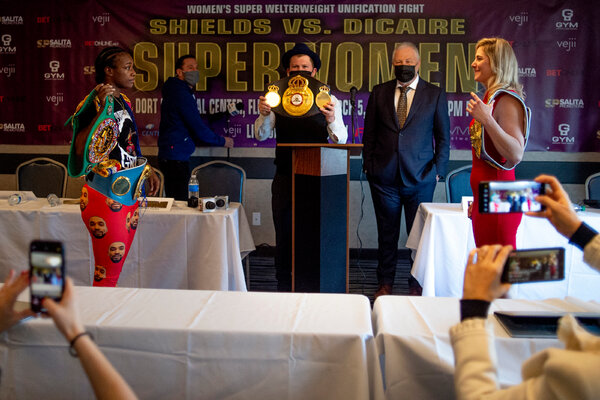 “They’re sexist and can’t handle strong women,” she said of the networks. “They’re always yelling equality, equal pay, equal opportunities, but they don’t mean it. Because all they have to do is say yes. They can say, ‘Yes, you know what? We’re going to put women’s boxing on every card no matter what.’ That would help build women’s boxing, but they won’t do it.”

She added, “So I’m taking my career into my own hands.”

Shields is now hoping fans will pay $29.99 to watch her fight Dicaire on Fite.tv. The bout, held at Flint’s Dort Financial Center, is the first time women will headline a pay-per-view event since Laila Ali fought Jacqui Frazier-Lyde in 2001, when more than 100,000 fans paid to watch. The fight headlines an all-women card scheduled close to International Women’s Day on Monday.

Instead of receiving a flat fee from a network, this pay-per-view fight offers a nonguaranteed payout for Shields and her team, with her promoter, Dmitriy Salita, taking 100 percent of the financial risk. It’s a gamble they decided to take because they were sick of waiting for the networks to offer them a time slot.

“The networks told us they had multifight commitments and they weren’t prepared to go forward with one of Claressa’s,” her manager, Mark Taffet, said. “I don’t know if that’s true, but I do know that there were no networks interested in televising the greatest women boxers.”

TV boxing programmers pushed back on the sexism charge.

Stephen Espinoza, president of Showtime sports, declined to discuss Shields’s claims, but in a statement said the pandemic had created increased costs for producing live events and resulted in the network cutting the number of bouts it could produce. He called Shields “a tremendous talent, which is the reason we have invested in her heavily over the last several years.” Showtime has shown six of Shields’s 10 professional fights and Espinoza said the network hopes to work with her in the future.

Ken Hershman, a former president of HBO Sports and a former executive vice president at Showtime, said he “highly doubts” that sexism is the problem, considering the networks have highlighted top women in the past, including Shields, Ali and Christy Martin.

“I think we’re long past questioning women’s capabilities in the ring to be exciting and skilled,” he said.

One reason for the dearth of televised women’s fights could be the lack of competition at the top levels, Hershman said. Shields, after all, has been knocked down only once in her career, and, according to CompuBox, a computerized punch scoring program, has landed nearly three times as many punches as her opponents (1,432 to 512). Without a group of fighters at the same level, Hershman said, it would be challenging to construct a compelling narrative for viewers that lures them into following a rivalry and leaves them coming back for more.

Shields has done her part to create a compelling narrative and the pandemic has given her time to think about that.

Time to think about how far she has come since a tumultuous childhood in Flint, where her mother struggled with addiction and her father served a long prison sentence. Time to think about overcoming obstacles like sexual abuse and hunger, only to be forced to keep fighting for respect once she reached the top of the sport.

She’s the only American fighter, male or female, to repeat as an Olympic champion. The fastest boxer in history to win world titles in three different weight divisions. If she wins on Friday, she will become the first undisputed champion in two weight divisions in the four-belt era.

“I’m an international superstar and they’re even making a movie about me,” she said of the upcoming biopic “Flint Strong,” written by Barry Jenkins, who wrote and directed the film “Moonlight,” an Oscar-winner for best picture in 2017. “So there’s no reason I shouldn’t transcend sports just like Serena Williams does.”

Shields said she spends one to two hours a night lying in bed thinking about how she can promote her brand so she can become more famous.

Should she post more on Instagram? Tweet more about her fights? Appeal to a wider range of fans on her YouTube channel? She already has 382,000 “organic Instagram followers,” enough, she said, to make her pay-per-view event a sure bet for a promoter.

Her whole career, she has prided herself on speaking up about inequalities in her sport, saying last month that she “is the voice of women who are scared to speak up because even in a room filled with men, my voice is heard.” Her advocacy started early.

After winning her first Olympic gold medal as a 17-year-old in 2012, she asked USA Boxing why her monthly stipend was only $1,000 while some of the male fighters were receiving $3,000. Her paycheck grew to $5,000 a month by the next Summer Games, she said.

She insists that women should be allowed to fight three-minute rounds in 12-round bouts instead of the current maximum of 10 two-minute rounds. That way, women can have a basis for receiving equal pay for their equal work.

“The rules actually say we can’t fight 12 rounds for three minutes because it will hurt us physically,” Shields said. “But I say, ‘You guys aren’t protecting us. You are degrading us.”

She sees mixed martial arts as much more egalitarian, which is part of the reason she is taking her fighting skills to the sport this summer with the Professional Fighters League. She signed with the league in December.

Shields said she had long dreamed of becoming a two-sport champion and has envied how well M.M.A. has marketed female fighters. She likes that M.M.A. often puts women on cards with men and tells more nuanced back stories about its fighters — she has an idea for a story about fighters being awesome babysitters and chefs — making them more appealing to fans.

Holly Holm, the former U.F.C. champion who made the transition from boxing to M.M.A., credits U.F.C. president Dana White for making the sport much more hospitable to women than boxing is. White quickly realized how many fans women can bring to the sport after he signed Ronda Rousey, U.F.C.’s first female fighter, in 2012, and she became one of the sport’s biggest stars. Before taking the chance on Rousey, White had said women would never fight in the U.F.C.

“Boxing needs someone like him willing to put their neck out there for women and to give them the exposure they need,” Holm said. “Look at Christy Martin, she was on the undercard of Mike Tyson and was on the cover of Sports Illustrated. Laila Ali was Muhammad Ali’s daughter. Talented women deserve to be seen. They need someone consciously pushing for that to happen.”

And once women are seen in boxing, Holm said, fans will come back for more and the sport will grow, which is Shields’s plan for this Friday’s event. She hopes a big audience will prove her worldwide reach. However many people tune in, whether it’s 20,000 or 120,000, she said she’ll take it, and then build on it.

Her dream is for an all-women’s sports network to show women’s boxing all the time so that fans, including her nieces and nephews, know where to tune in to see a great women’s fight. At the very least, the channel would give her another activity to count on for babysitting nights, she said with a laugh.

“I’m not pushing for equality just for me because, you know, I’ve had a pretty good career so far,” she said. “I’m doing it for all the young people after me. I want people to think about me someday and say, ‘Claressa Shields was so much bigger than just boxing. She helped change the world.’”