Melbourne City might have been grabbing media attention for all the wrong reasons because of the furore over the future of star striker Bruno Fornaroli, but laid back midfielder Luke Brattan hasn't let it worry him – even though the Uruguayan is one of his best mates at the club.

He doesn't have the profile of Fornaroli, but Brattan has been in the same situation as his friend. On a number of occasions coach Warren Joyce has left Brattan out of the team, and each time he has battled his way back into the starting 11. 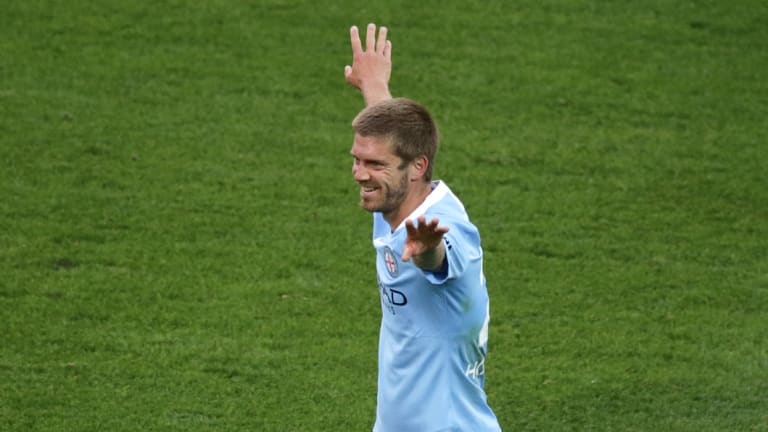 Like every player, he doesn't like it when he is on the outer, but he says it's how the game works and you just have to accept the situation, work harder and force your way back into contention.

How that sort of situation affects a player's thinking when it comes to contract talks is one thing, but in season, says Brattan, you just have to knuckle down.

''I can only speak personally and for me, not really,'' he says when asked if the speculation over Fornaroli's future affects him and his teammates.

''I’m good mates with Bruno, he’s one of my best mates. That’s football, it is what it is, whatever reason is going on. As soon as you step on the field it’s mind on the job. Personally it didn’t affect me.

''I don’t read the paper all that much and don’t have Twitter. I have Instagram and I’m not on that an awful lot. I didn’t see a lot [of the noise] but everyone talks about it. He’s a big player.

''He’s been one of Melbourne City's best, if not the A-League's best foreigners. His goalscoring record is unbelievable and he’s a great guy and the fans love him.

''Of course it's going to make some noise. It is what it is and we’ll get on with it.''

Speaking after he had scored a wonder goal in City's 3-0 rout of Newcastle, Brattan opened up about the feelings within the playing group.

Despite being at the centre of the storm Fornaroli, he said, '' seems fine''.

''Warren’s an honest guy and if you earn his trust he plays you. He’s proven that in the past.

''We have to get on with it and win some more games.

''If you react well, positively, work hard in training there’s always a way back in.''

Like all players who have had their character tested in that fashion, Brattan is now determined to make the most of every minute of game time.

''I want to play every minute of every game

Joyce was full of praise for Brattan after the win over the Jets, a victory that relieved some of the pressure he and the club had been under.

''The demand on him is to just enjoy being a footballer, put high demands on yourself. You see high levels of skill and quality [in him] all the time,'' the coach said.

''In training there's loads of stuff about him that nobody has ever seen. I am trying to get him to enjoy being a footballer, trying to squeeze the maximum out of him and see if he can get to a different level than he was when I first got to the club.''

Brattan himself is not happy with his current form.

''I don’t think I’m playing particularly well at the moment. I need to be more influential. I’m playing a little bit higher up and I have to get used to that.

''There are periods in games that we drop off and let teams onto us. If we want to win the league we have to change that.''

And what of his goal on Sunday night, surely a contender for goal of the season?