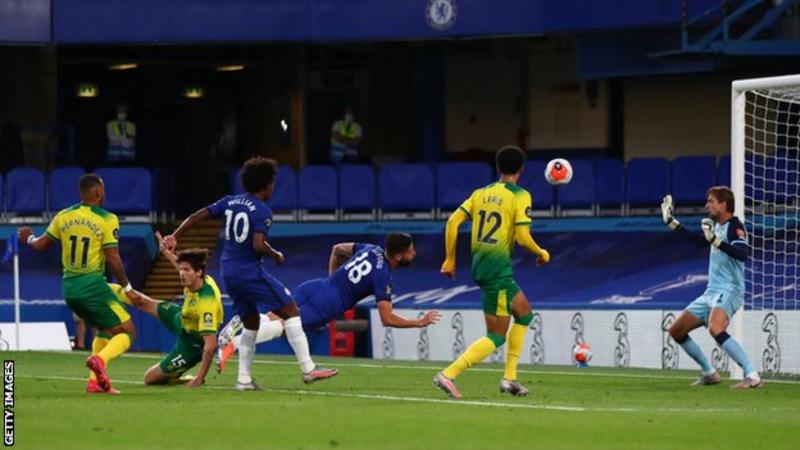 Chelsea put themselves in the driving seat to secure a Champions League spot with an unspectacular victory over relegated Norwich at Stamford Bridge.

Striker Olivier Giroud guided a header past Tim Krul on the stroke of half-time after Christian Pulisic created space for the cross on the right.

The Chelsea pair almost combined again in the second half but Pulisic could not guide Giroud’s chipped ball past Krul.

Victory strengthens Chelsea’s hold on third place, where they sit four points above Leicester and Manchester United, who both play on Thursday.

Norwich, who were relegated following a 4-0 thrashing by West Ham on Saturday, failed to record a shot on target during the match.

Frustrated Chelsea get the job done 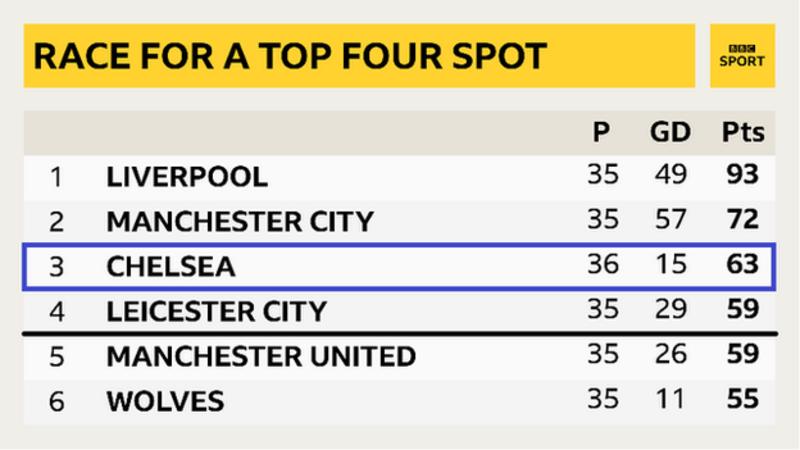 The first half was lacking in action as Norwich sat back and squeezed out any space available for Chelsea. The hosts just could not seem to get things clicking.

Following Saturday’s 3-0 defeat at Sheffield United, Chelsea would have wanted to start brightly and they showed signs with Ruben Loftus-Cheek heading wide and Marcos Alonso firing a dangerous cross in from the left within five minutes.

But as the half wore on, Chelsea struggled to create any clear-cut opportunities – Giroud reacted to a third scuffed shot with a roar of frustration in the box after 40 minutes.

Pulisic had provided the best chance of the half – controlling Antonio Rudiger’s cross, turning sharply and firing it towards the roof of the net, forcing a save from Krul – before he eventually set-up Giroud’s header with a swinging cross from the right.

The goal should have been a catalyst for Chelsea to release the shackles but the fluidity never really materialised, despite them still being able to create further chances.

Giroud and Pulisic were busy but not clinical, though it didn’t prove costly as Norwich never presented any real threat.

In the end, it was a comfortable victory for Chelsea despite a lack of ruthlessness. Manager Frank Lampard will hope that clinical edge returns for a significant run of matches – they face Manchester United in an FA Cup semi-final on Sunday, visit champions Liverpool in the league next Wednesday and then finish the top-flight campaign at home to sixth-placed Wolves four days later.

Mateo Kovacic (Chelsea) wins a free kick in the defensive half.

Attempt saved. Willian (Chelsea) right footed shot from long range on the left is saved in the top left corner.

Emiliano Buendía (Norwich City) is shown the yellow card for a bad foul.

Attempt missed. Olivier Giroud (Chelsea) left footed shot from the right side of the six yard box is close, but misses to the right. Assisted by Willian with a cross.

Reece James (Chelsea) wins a free kick in the attacking half.

Attempt saved. Marcos Alonso (Chelsea) header from the left side of the six yard box is saved in the centre of the goal. Assisted by César Azpilicueta with a cross.

Attempt missed. Olivier Giroud (Chelsea) header from the centre of the box misses to the right. Assisted by César Azpilicueta with a cross.

Attempt missed. César Azpilicueta (Chelsea) left footed shot from outside the box is just a bit too high. Assisted by Marcos Alonso with a cross.

Mateo Kovacic (Chelsea) is shown the yellow card for a bad foul.

Attempt blocked. Jamal Lewis (Norwich City) left footed shot from the left side of the box is blocked. Assisted by Kenny McLean.

Ben Godfrey (Norwich City) wins a free kick in the defensive half.

Kurt Zouma (Chelsea) is shown the yellow card for a bad foul.

Todd Cantwell (Norwich City) is shown the yellow card for a bad foul.

Ruben Loftus-Cheek (Chelsea) wins a free kick in the attacking half.