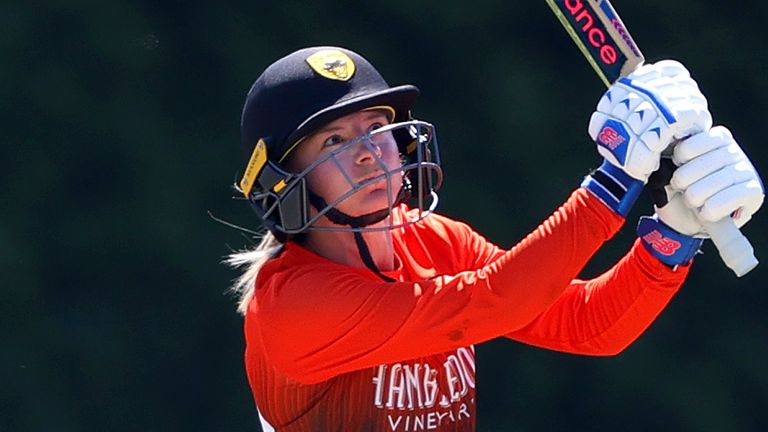 From the Northern Diamonds to the Southern Vipers, via Thunder and Lightning, here we take a look at the eight teams spread across two groups who will be competing to win the newly-titled Charlotte Edwards Cup, the women’s regional domestic T20 competition which kicks off this weekend.

Key player: Marie Kelly. Having captained Warwickshire to T20 glory in 2019 and as Sparks’ second highest run-scorer last season, Kelly is a vital component to their success. She consistently makes substantial contributions, while she also possesses the firepower to clear the boundary.

Under the radar: Liz Russell is one of Sparks’ most reliable bowlers and is excellent at applying pressure at one end. At the death, she is crucial, especially with Emily Arlott away with England, meaning her consistent bowling will come into the forefront more this season.

Rising star: Milly Home. After moving to Worcestershire ahead of the 2021 season, her batting form is well on the up in T20s, having scored an unbeaten 88 already this season for her county. With more time at the crease, she is set to be an exciting young talent in the competition.

Tournament hopes: Central Sparks will be feeling confident, with the squad consisting of numerous Warwickshire women who won the national T20 cup in 2019. Not only do they have ample experience there – exciting players from Worcestershire and Staffordshire, such as Chloe Hill and Steph Butler make up a very strong squad. The loss of spinner Sarah Glenn to England duty may prove to be an issue, however spinners Georgia Davis and Anisha Patel are more than sufficient to fill the void. Amy Jones is another absentee to England, but there are several other exciting batters in the line-up. Ultimately, after a successful start to the Rachael Heyhoe Flint Trophy, the squad has momentum to take into the tournament.

Key player: Kathryn Bryce. The 23-year-old captain and elder of the two Bryce sisters in the Lightning squad, who also captains Scotland Women, opens the bowling, bats at three and has been consistently reliable since joining Lightning in 2019.

Under the radar: Lucy Higham. Part of the Lightning set-up since 2016, the off-spinner, middle-order batter and sharp fielder has shown the benefit of that experience with bat and ball in the past two seasons.

Rising star: Teresa Graves. The 22-year-old medium pace bowler is the twin sister of Lightning off-spinner Yvonne Graves and took nine wickets and scored 82 runs in the first four Rachael Heyhoe Flint Trophy matches, catching the eye as a player on the up.

Tournament hopes: Led by all-rounder Bryce, who recently became the first Scottish batter or bowler to break into the ICC T20 top 10 rankings, East-Midlands-based Lightning will hope to take the momentum of back-to-back wins in the Rachael Heyhoe Flint Trophy into the Charlotte Edwards Cup. Coached by the experienced Rob Taylor, who took Loughborough Lightning to Finals Day twice in the Kia Super League, they bat deep, can often call on up to eight bowling options and are strong in the field. Expect left-arm spinner Kirstie Gordon, eager to force her way back into the England reckoning, to be prominent among the bowlers, where the form of medium pacer Graves has made up for the loss through injury of Bethan Ellis. Lightning will be confident of being contenders. Key player: Bryony Smith will be acting captain with Farrant away on international duty. Both her power-hitting at the top of the order and her off-breaks will be vital to Stars’ hopes of success.

Under the radar: Grace Gibbs. Her muscular hitting suits the ‘finisher’ role in the middle order, while her medium pace bowling will have greater prominence in the absence of Farrant and Freya Davies.

Rising star: Alice Capsey hasn’t yet hit the heights of last season, but the 16-year-old is a huge talent whose skills with bat and ball make her one to watch in this shorter format.

Tournament hopes: Stars are among the franchises hardest hit by England call-ups, losing key batter Sophia Dunkley, skipper Farrant and her fellow seamer Davies, the leading wicket-taker in Kia Super League in 2019. In the absence of the latter pair, wrist spinner Danielle Gregory and Smith’s off-breaks come to the fore. There may be opportunities too for development squad quick Emma Jones – currently studying veterinary science at Cambridge – to make her Stars’ debut. 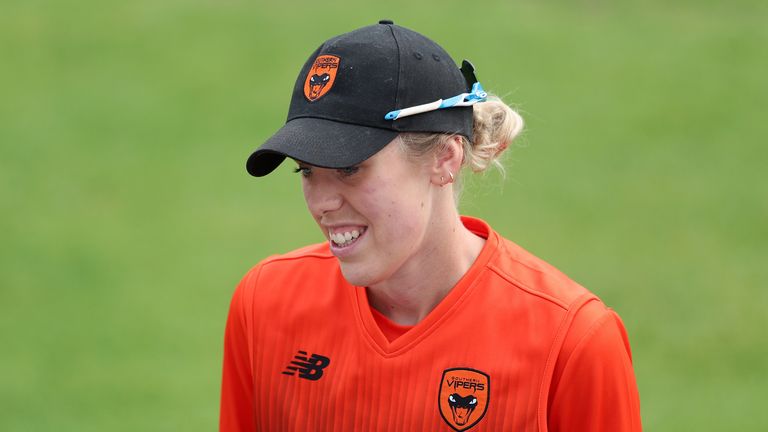 Key player: Charlotte Taylor continues to bamboozle the best players in England with her arm balls. She may no longer be a secret weapon, but she is certainly a key weapon, especially in the powerplay overs.

Under the radar: Charlie Dean. The young off-spinning all-rounder is quiet off the field but certainly not quiet on it – she is the leading wicket-taker in the Rachael Heyhoe Flint Trophy so far this season, and while her chances to bat have been limited, the T20 format should give her more of a chance to showcase her skills in that department too.

Rising star: Maia Bouchier. The 22-year-old is fresh from making a half-century against Storm in the third round of the Rachael Heyhoe Flint Trophy, and will be looking to translate that form into 20-over cricket. Her batting has real power and she is widely considered a future England opener.

Tournament hopes: Vipers will be hoping that they can translate their excellent record in the 20-over Kia Super League (they made it to three out of four Finals Days) into the new era of the Charlotte Edwards Cup. Opener Danni Wyatt’s availability, after she was left out of England’s white-ball squad, is a massive boost, while 18-year-old Ella McCaughan could get a chance to shine in her favoured position at the top of the order. With leading strike bowler Lauren Bell seemingly back to full fitness after missing out on the second and third rounds of the Rachael Heyhoe Flint Trophy, and morale boosted by the fact they are back to sitting pretty atop the 50-over competition, this Vipers side look like a formidable threat.

Key player: Katie Levick, Hollie Armitage and Linsey Smith were considered, but leg-spinners are gold dust in T20 and Levick is the most prolific bowler in English women’s domestic cricket with 236 wickets.

Under the radar: Jenny Gunn. With bat and ball, the England legend continues to shine with little fuss. Also, she must carry a spade in her kitbag because she often digs the Diamonds out of trouble down the order.

Rising star: Leah Dobson. The 19-year-old Scarborough-born batter is yet to make her Diamonds debut. She once smashed 161 off 81 balls when opening for Yorkshire Under 17s so, given a chance, she could be great fun to watch.

Tournament hopes: Diamonds director of cricket James Carr has described their start to the 50-over Rachael Heyhoe Flint Trophy as “imperfectly perfect”. They have won three out of four games so far and sit top of the table, but two of those wins – against Lightning and Stars – were come-from-behind successes and could easily have been defeats. In short, there is plenty of room for improvement. The Diamonds look well suited for T20 cricket, with power and innovation with the bat and variety with the ball. It would be no surprise to see them challenging at the business end of the competition, and they start with a blockbuster ‘Roses’ clash with Thunder at Emerald Headingley on Saturday. For the early stages of the competition, they will be without Katherine Brunt, Nat Sciver and Lauren Winfield-Hill due to England ODI duty, but they have shown previously they can cope with those absences.

Key player: Naomi Dattani. Sunrisers need someone to stand up and Dattani has the talent to do so with bat and ball. She has T20 winning pedigree – with Women’s Twenty20 Cup and KSL winner’s medals.

Under the radar: Cordelia Griffith. The batter has had a few starts without going big in the Rachael Heyhoe Flint Trophy, but scored 187 runs across four T20 innings for Middlesex this summer.

Rising star: Kelly Castle. The Essex captain has been the surprise package of the Rachael Heyhoe Flint Trophy with six wickets and a fifty. Her low skiddy action will be useful in or out of the powerplay.

Tournament hopes: The Sunrisers are still pointless across two seasons of the Rachael Heyhoe Flint Trophy, but a change of format could, they’ll hope, mean a change in fortunes. One massive positive for the Sunrisers is the recent T20 form of their batting line-up – with Dattani, Grace Scrivens and Griffith making up three of the top eight run scorers in the county matches earlier this summer. Another is that they took Trophy table-toppers and holders Southern Vipers to the final ball of a recent warm-up match, only to lose by a run.

Key player: Emma Lamb. The dynamic opening batter and canny off-spinner, who has already scored a century for the Thunder in 50-over cricket this summer, looks ideally suited to the T20 format.

Under the radar: Piepa Cleary. The Australian all-rounder, with nearly 50 WBBL appearances for Perth Scorchers, is here for the full competition and the seamer will be a steadying influence in a young Thunder side.

Rising star: Hannah Jones. The 22-year-old left-arm spinner has played second fiddle to England’s Sophie Ecclestone in the early stages of the 50-over campaign. Now is her time to shine.

Tournament hopes: The Thunder’s aim at the start of the summer, including the 50-over Rachael Heyhoe Flint Trophy, was to further develop their young squad and bloody some noses of the more experienced teams along the way. A haul of two wins in four matches is a profitable return, especially as it included a victory over previously unbeaten Central Sparks. The aim will be the same again for Paul Shaw, Alex Hartley and co, and they will get a shot at arguably the biggest scalp immediately when they open the competition with a trip to Emerald Headingley to face ‘Roses’ rivals Northern Diamonds on Saturday.

Key player: Sophie Luff. Promoted up the order last season, Storm’s talismanic captain emerged from the shadow cast by Heather Knight with a series of big scores. If she fires, Storm will be competitive.

Under the radar: Nat Wraith. A tidy performer behind the stumps, her ability to stand up to quick bowling creates pressure, while her clean-hitting renders her a potential match-changer with the bat.

Tournament hopes: Much has changed since Storm triumphed in the 2019 Kia Super League final, and expectations have had to be tailored accordingly. Overseas stars Smriti Mandhana and Rachel Priest will not be returning, while Knight and Shrubsole are away on England duty, Freya Davies and Fran Wilson have moved on and key spinner Claire Nicholas is on maternity leave and not expected to be available until near the end of the campaign. Much will instead depend on the ability of senior players Luff, Fi Morris and Katie George to lead from the front and inspire a group that is essentially young and short on experience at this level. Emerging talents Gibson, Lauren Filer, Emma Corney, Niamh Holland and Mollie Robbins will be eager to establish themselves, but attaining consistency is likely to be a challenge for a side that comes into this tournament on the back of three straight defeats in the Rachael Heyhoe Flint Trophy.