Australia’s Kyle Chalmers says it was an easy decision to put the team ahead of himself, electing to bypass the men’s 200-metre freestyle heats in favour of the 4x100m men’s medley relay on the final day of the world shortcourse swimming championships at Albert Park.

Chalmers was pencilled into compete in a 200m heat on Sunday morning, but was a late withdrawal before helping Australia qualify second fastest for Sunday night’s relay final, as the Australian’s aim to equal their record of 12 shortcourse gold medals, achieved in 1995 and 2006.

Chalmers has already collected six medals this week, including gold in the 100m freestyle and in the 4x50m freestyle relay. His three silvers and one bronze have also been in relay events.

“We’re ’round the mark to make it through to the final tonight, so I knew I had to be a part of it to get us through. I’m going to need to give us something very, very special tonight to get us on the podium.

“I’ve had the individual success I’ve been chasing, but I want the relay success with my best mates. Winning the medley relay is such an important race for us internationally, and always the last event of the competition, so the last event for Australia we want to do well.”

USA will again be the team to beat, after the Americans beat Australia in the 4x200m freestyle relay on Friday night. The final will be the very last event for the week, at 9.19pm on Sunday night.

Chalmers, who can become the first Australian to ever win seven medals at a shortcourse championship, said he would need to spend Sunday afternoon recovering before one last effort.

“I’ll be recovering, the mind feels good, and hopefully the body allows and follows what the mind’s thinking. 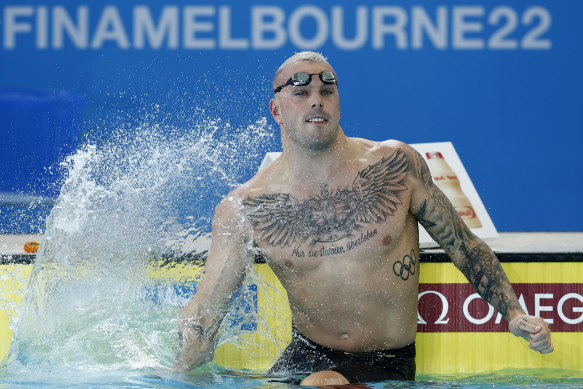 Kyle Chalmers is gunning for a seventh medal on Sunday night.Credit:Getty

“I’m excited to be in that race again tonight with three of my best mates in the world.”

Australia’s women will also compete in the 4x100m medley relay on Sunday night after qualifying second fastest in the morning, meaning Mollie O’Callaghan and Emma McKeon – if they’re selected to race – can also become the first Australians to win seven short-course medals at one event.

Meanwhile, Australia’s best chance for gold on the final evening of the championships will be in the women’s 200m backstroke.

Kaylee McKeown did what was required to qualify for the final, but the world record-holder said the race would be a tough one.

“My legs are feeling it on day six, and you probably see that on most of my turns, but I’m happy to make it into the final,” McKeown said.

“I’d like to say I’ve got more left in the tank, but I’m pretty puffed from that this morning. Seeing the American girl [Claire Curzan] and some of the Europeans looking comfortable this morning, it’s going to be a very tough field to beat tonight.”

McKeown has won two gold medals and a bronze this week, including the women’s 100m backstroke. If she were to win on Sunday night, she would become the first Australian woman to hold an Olympic Games, Commonwealth Games, shortcourse and longcourse title in one event at the same time.

McKeown won gold in the 200m backstroke at the 2020 Tokyo Olympics and 2022 Birmingham Commonwealth Games, and also won the longcourse title earlier this year at Budapest. 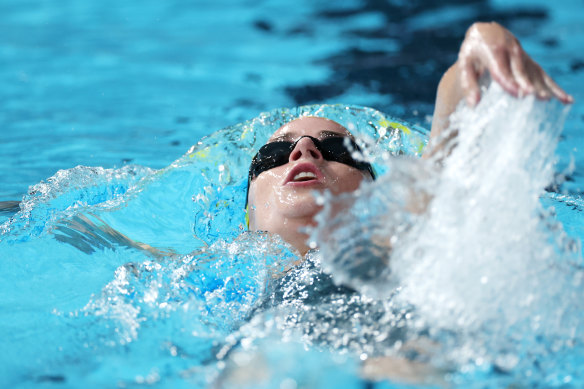 Kaylee McKeown is one of Australia’s top medal hopes on Sunday, in the 200m backstroke.Credit:Getty

Grant Hackett is the only Australian swimmer to ever hold an Olympic, Commonwealth Games, longcourse and shortcourse title at the same time, completed in 2002 when he won the 1500m freestyle at the Moscow shortcourse event. He already had the Commonwealth Games title, from the 1998 Kuala Lumpur games, and then the Sydney 2000 Olympics and the 2001 longcourse championships in Fukuoka.

Sunday night’s finals start with the women’s and men’s 100m butterfly from 7.30pm.

Alexandria Perkins will represent Australia in the women’s final, while Matthew Temple will compete in the men’s final.

McKeown’s final is scheduled for 8.08pm, while Australia will have two representatives in the women’s 200m freestyle final after Leah Neale narrowly beat Madison Wilson in their heat this morning to qualify sixth and eighth fastest respectively.

Should Neale or Wilson win the final, Australia will clean sweep the women’s freestyle events, after Emma McKeon won the 50m and 100m titles and Lani Pallister swept the 400m, 800m and 1500m events.