Neil Lennon’s second spell in charge of Celtic came to an end as he was sacked on Wednesday morning.

The Parkhead boss came under immense pressure after falling 18 points behind Premiership champions-elect Rangers, with the much-coveted 10 in a row slipping away.

And assistant manager John Kennedy will now be placed in interim charge until the end of the season after Sunday’s latest defeat to Ross County. 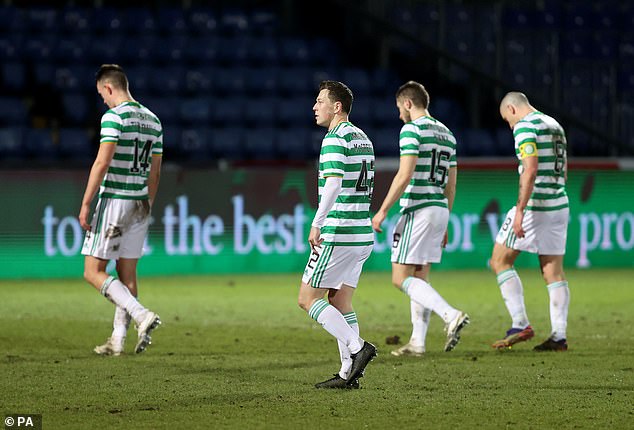 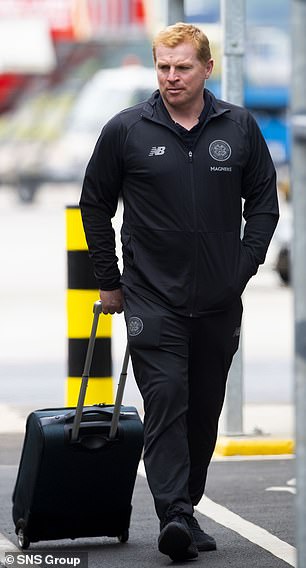 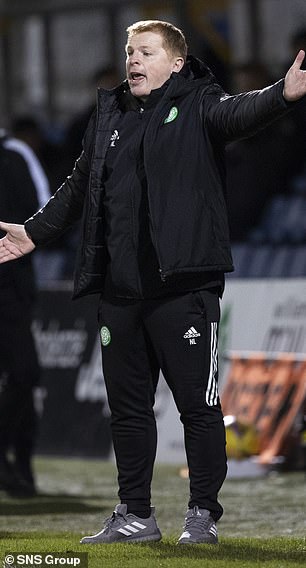 ‘We have experienced a difficult season due to so many factors and, of course, it is very frustrating and disappointing that we have not been able to hit the same heights as we did previously,’ Lennon said in his parting statement.

‘I have worked as hard as ever to try and turn things around, but unfortunately we have not managed to get the kind of run going that we have needed. 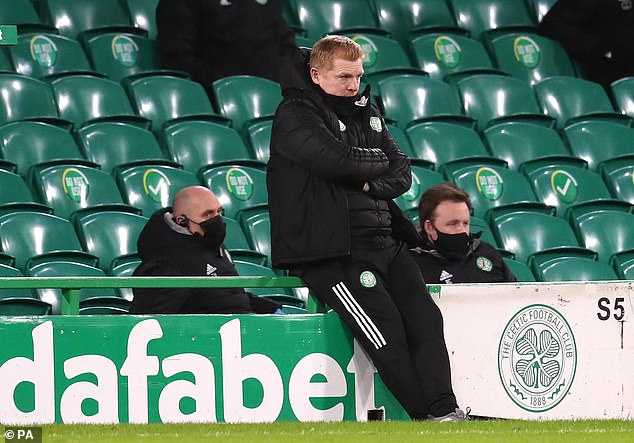 ‘I would like to thank so many people at the Club who have given me so much and I would also like to thank my family for their love and support. I wish the Celtic supporters, players, staff and directors nothing but success for the future.’

Fan protests spilled over following a Champions League exit to Ferencvaros, a league defeat to Rangers in October and a Betfred Cup loss to the Highlanders in November.

But patience ran out after defeat to Ross County and Lawwell described it as a ‘sad day’ to sack a ‘true Celtic man’ like Lennon.

‘Neil has always been and will always be a true Celtic man and someone I will always hold in the highest regard,’ Lawwell said.

‘I have watched Neil fight many battles over many years, on and off the field, with a courage and tenacity few could match. Even this season, he has fought so hard and worked tirelessly to turn things around.

‘While this season has not progressed as we would have liked, it cannot diminish the character or integrity of a man who has given the Club so much. 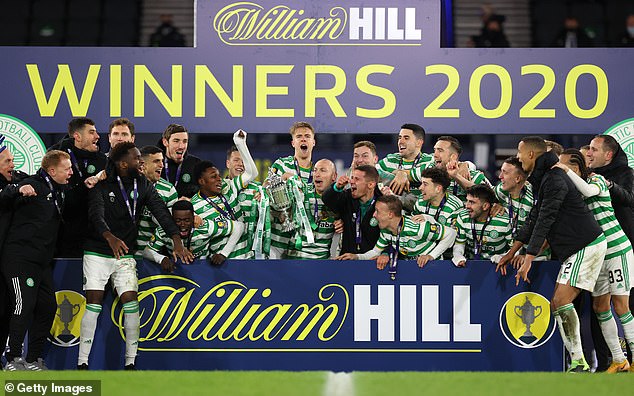 ‘On behalf of everyone at the club, and personally, I would like to thank Neil for his work as our manager and I wish him and his family good health and continued success in everything they do.’

Lennon responded to fan protests by becoming the first man in Scottish football history to win a domestic treble as both player and manager by clinching the Scottish Cup in December. And he defiantly refused to bow to demands to quit.

The Celtic board hoped to limp on to the end of the season with the 49-year-old in charge.

However, a season of woe has been blighted by Covid-19 issues, poor player recruitment on the likes of Vasilis Barkas and Albian Ajeti, a dismal Europa League campaign and the relentless form of arch rivals Rangers.

Despite rallying to record five straight wins, a 1-0 defeat in Dingwall has proved the straw which broke the camel’s back. 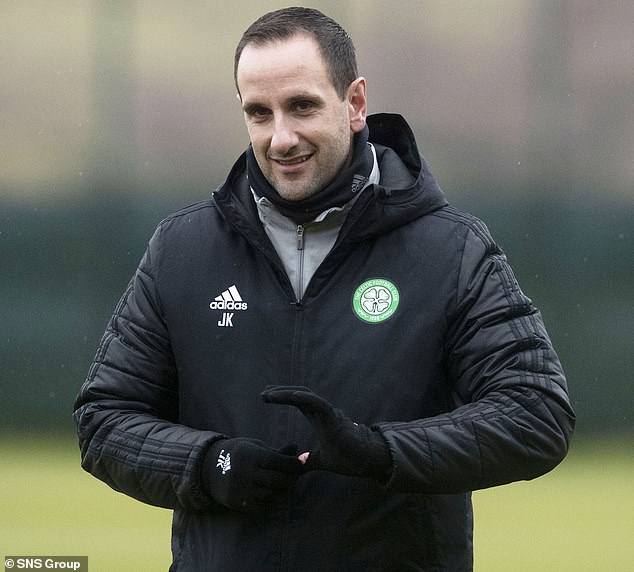 Steven Gerrard’s Ibrox side now need just seven points to win their first Scottish title in ten years. And for Celtic, a huge summer of transition and change beckons.

Lawwell will retire to be replaced by the SRU’s Dominic McKay as chief executive at the end of the season.

Already interviewing for a newly created role of Sporting Director, Celtic’s summer of change will continue with the appointment of a new head coach to replace Lennon.

The former club captain returned to the helm for a second spell in charge when Brendan Rodgers quit for Leicester City in February 2019.

Despite winning another five trophies, his links with the club look certain to be cut for the final time over the next 24 hours.

NEIL LENNON IN HIS OWN WORDS

‘There are some players who may want to leave. They have made inroads into that in the last six months or so. So if they don’t want to be here, we have to do something about it. If they are making waves to leave the club they are obviously not committed.

‘We want players committed to the club. I am not going to go into it but I am putting it out there because it has been bugging me for a long long time. I’ll have to carry the can, and take the responsibility for it. I don’t know if it’s attitude, mentality but we seem to have made the same mistakes as we did last year.

‘Just poor, poor goals defensively and not a cutting edge in the final third when we’re in control. I’m not saying Ferencvaros are a bad team, they’re not, but looking at the game in the cold light of day, we had so much control of the game that we should’ve won. But we haven’t.

‘That doesn’t make us weak, it doesn’t make me weak but people will cast aspersions that we’re not good enough. They are good enough, they haven’t performed anywhere near what they can tonight and let the game get away from them.’

‘The win gives Rangers a lift obviously. It’s early in the season though and you can’t listen to all the noise outside. Can they respond? Absolutely. They’ve done it before. But they can’t live on the past. This is the present and we’ve got a title race on our hands and we have to roll out sleeves up and do better.

‘We really needed a spark. I thought we lacked a bit of experience today and we’re a little naive in some aspects.’

‘Lack of application, lack of hunger and that’s not us, so there has to be a culture change and I’ve got to change it quickly and the players need to change quickly as well because that’s totally unacceptable for a club of our standing. It is an accumulation of things.

‘We need to get back to showing a bit more humility and start working harder on the training ground.’

‘I didn’t think there was a hell of a lot wrong with the performance. The body language of the players was good. They are trying to find solutions, as we all are.

‘If you keep losing games, there is an expectation at this club, there’s a demand for excellence and there’s a demand for wins – I am fully aware of that. I am not standing here like the happy clapper saying everything’s okay, because it’s not. But we’ll do everything we can – if I’ve still got the opportunity to do that – to turn things around.

‘Today’s result wouldn’t have helped, put it that way. They [the board] believe in me and I believe in what I’m trying to do. I know I’m repeating myself but we do believe we will turn this around and quickly.’

‘They are not a board that sack managers for the sake of it. We have had great success. We are going through a tough time but they don’t leave you out in the lurch.’

‘You can’t just say it’s over, because there is still a lot of football to be played. We have to be a lot more consistent in the second half of the season than we have been in the first half. It may be a pivotal moment – I can’t predict what is going to happen – but we have to keep playing like that, keep being consistent, keep winning games and apply as much pressure as we possibly can.

‘They (my players) were outstanding today and we made them (Rangers) look very ordinary today.

‘We were by far superior and just needed the finishing touch really. We thought it would come the longer the game goes on, they would tire.’

‘Shane will go straight into the squad. It’s a great bit of business by the club and great for the supporters.

‘We’ve got a quality player that understands the ethos of the club and it’s important to have players like that in the dressing room.’

‘I understand the frustrations of the supporters because ultimately we are not on a great run at the minute. But it serves no purpose, particularly for the players.

‘I am old enough, big enough to take criticism and abuse. Some of it is justified, some of it is over the top. That’s the role of a manager and that’s the responsibility you have to bear.

‘We are all in agreement we must do better and we have to do that with results and performances. It can turn around very quickly, then it’s baby steps after that; build, build, build.

‘For 20 years, from my own point of view, I’ve done everything in my power to bring success for the club and the fans. That’s not going to change on the back of a bad month or people being upset at my style of management or whatever it is.’

‘We’ve been held to a far higher standard than any other club. Protocols at different clubs are inconsistent.

‘As soon as Celtic are deemed to do something wrong, bang, you’re all wanting blood, it’s absolutely scandalous. The fallout from this has been way too much.

‘We did not abuse any privilege. We did the right things. We were absolutely, totally professional. We had a little drink in the afternoon on a day off, completely allowed, no law breaking, yet we come back to this barrage of absolute hypocrisy.

‘We’ve come back, we’ve been absolutely decimated by these rules. It seems political.’

‘About 70-80 per cent of the group are teetotal and you know the inference and innuendo that he is making. It is not a stag do, it isn’t an ’18-30′ even though it has been portrayed like that.

‘Everyone is interested in my job. You keep asking if I’m going to be here. I will be until I’m told otherwise.

‘There have been many [fans who don’t support me] like that since I got the job. But we’ve won five trophies out of six. Not bad.’

‘There has definitely been a disconnect between the team that ended last season and started this one.

‘The lack of belief and lack of quality – it’s not just individuals, it’s a collective, and it’s symptomatic of the season.

‘It was dreadful. We deserved what we got today. I would say this is the lowest point of the six years I have been manager here [across two spells]. This is a real test of adversity and you have to show strength. I want to show strength but I need some support and performances from players.

‘Too many of them have been insipid this season, to say the least. Whatever walk of life you are in you need to have a form of professional pride. Especially at a club like this.’

‘I apologise. It wasn’t for the want of trying. The players were putting in the effort, but it wasn’t good enough.

‘It encapsulates our season. It’s another poor goal from a set piece. But I think we played well tonight and did enough to win the game.

‘The goal is inexcusable. Our defenders don’t seem to want to defend this season. We do the work on the training pitch but if the players don’t attack the ball there’s not much you can do.

‘It’s been a running theme for us this season for whatever reason. It’s hugely damaging.’

‘We have experienced a difficult season due to so many factors and, of course, it is very frustrating and disappointing that we have not been able to hit the same heights as we did previously.

‘I have worked as hard as ever to try and turn things around, but unfortunately we have not managed to get the kind of run going that we have needed.

‘I would like to thank so many people at the Club who have given me so much and I would also like to thank my family for their love and support.

‘I wish the Celtic supporters, players, staff and directors nothing but success for the future.’