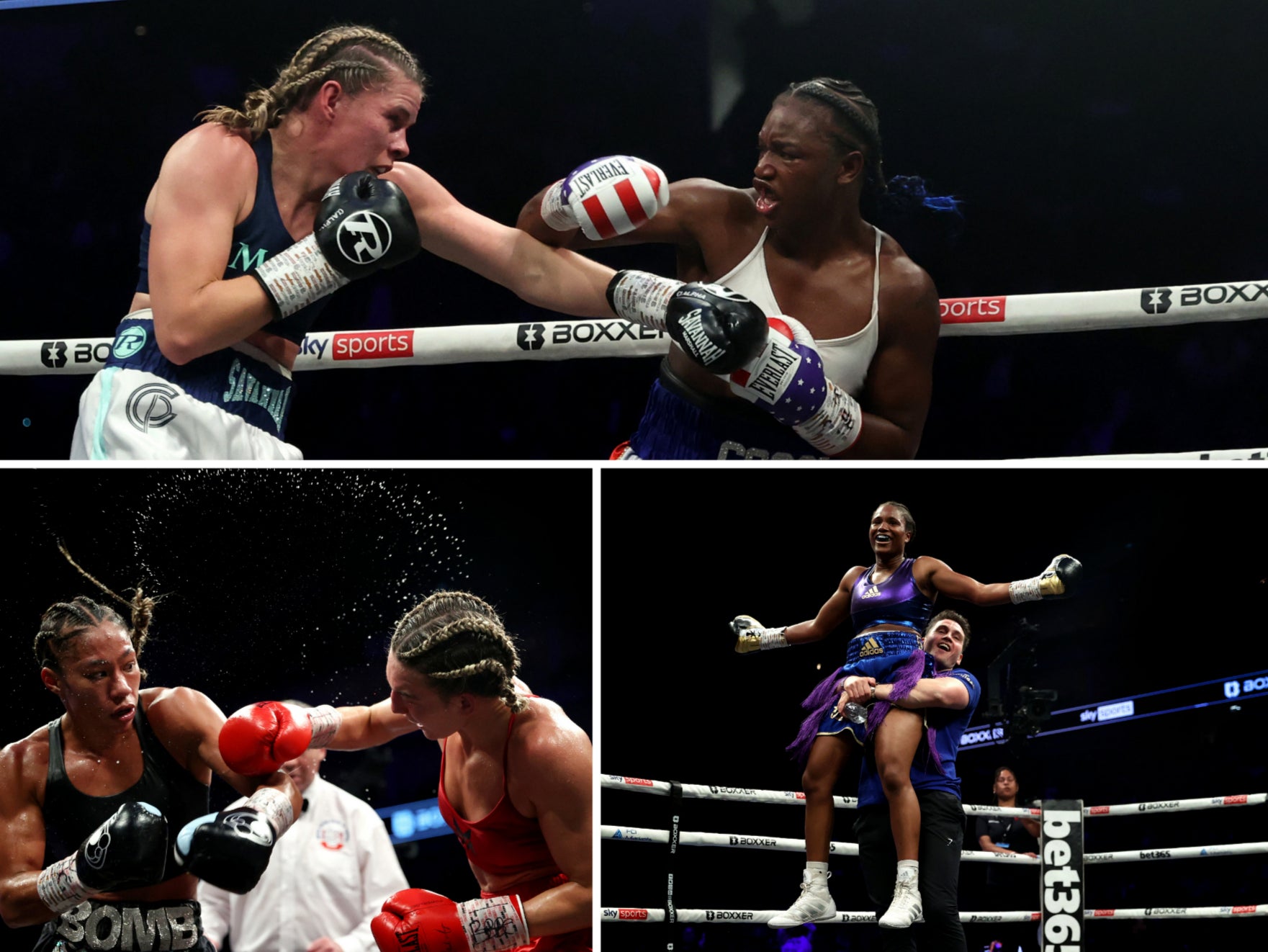 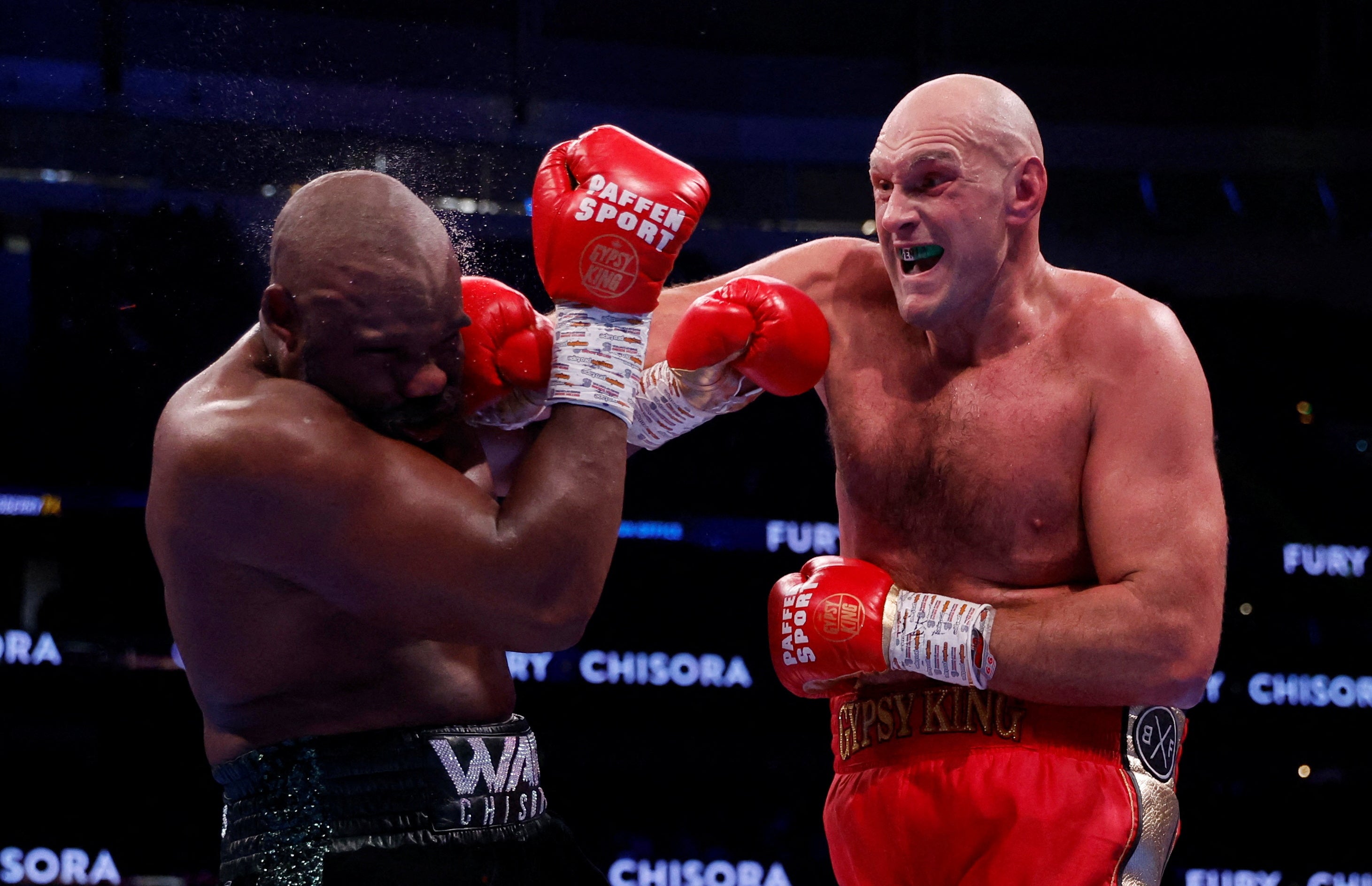 Fighter of the year

Alex Pattle: Dmitry Bivol. It is one thing to beat the consensus pound-for-pound No 1, it is another to do it with a front-foot approach and relative ease. That was how Bivol’s year started, the Russian outpointing Canelo to end the Mexican’s nine-year unbeaten run and remain WBA light-heavyweight champion. The 32-year-old then kept hold of his gold again by putting on a clinic against the previously unbeaten Gilberto Ramirez, emerging victorious by a significant margin on all three judges’ scorecards.

Ollie Cooper: Bivol. The Russian’s year has been the stuff of dreams, fending off Ramirez with relative ease and, of course, beating the one and only Canelo in emphatic style. While I stand by the fact that this was the most straightforward pick on my list, a very special mention goes to Usyk, who returned from the frontlines in Ukraine to beat Anthony Joshua for the second time in Saudi Arabia. 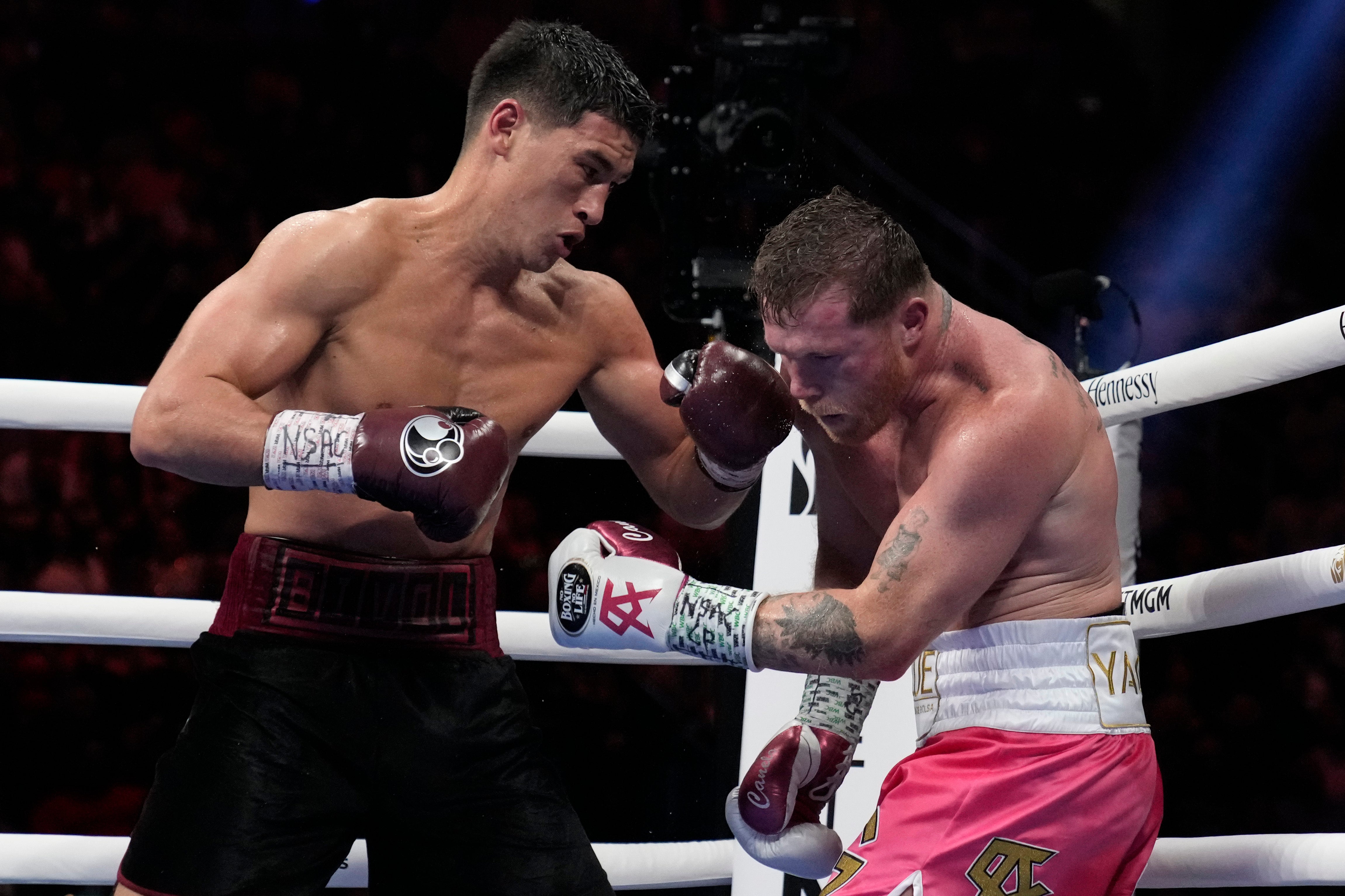 Jack Rathborn: Many will side with Bivol here and he’s a great pick, but I’ll go with Jesse “Bam” Rodriguez. Unseasoned with just 14 fights, the 22-year-old started his year moving up in weight and on short notice (six days) to fight world class super-flyweight Carlos Cuadras, following Srisaket Sor Rungvisai’s late withdrawal due to illness. “Bam” pulled off the comprehensive win, then battered the illustrious Rungvisai over eight rounds as well as securing a wide points win over Israel Gonzalez. The kid is exciting and audacious as he jumps between 115 and 112lbs.

Fight of the year

AP: Katie Taylor vs Amanda Serrano. An honourable mention goes to Chris Billam-Smith vs Isaac Chamberlain, a slobberknocker that was probably the better fight from bell to bell; but I’m considering some extra factors here, too. Taylor vs Serrano the biggest fight in the history of women’s boxing, and it actually over-delivered on the immense hype. That April evening at New York City’s historic Madison Square Garden, and the electric atmosphere that it conjured, will never be forgotten, nor will the frenzied flurries of punches that characterised the peak of this undisputed title fight. A relieved Taylor heard “and still”, though Serrano was arguably unlucky not to take all the lightweight belts from the Irishwoman. Unified featherweight champion Serrano seemed to have Taylor out on her feet at one point, but the trailblazer hung on and left NYC with the gold.

JR: Taylor vs Serrano was the event of the year, but Leigh Wood vs Michael Conlan was the fight of the year. In a classic featherweight scrap in the cauldron that is the Nottingham Arena, Conlan jumped out to a lead with his speed, dropping the champion in the first round. But Wood, roared on by the home crowd, closed the gap and delivered an absolutely devastating 12th-round knockout. Conlan sunk into the ropes before “Lethal” drove him through them, sparking wild scenes of celebration, including the Nottingham man performing a Jurgen Klinsmann in the ring. The rematch could be among the most anticipated fights of 2023. 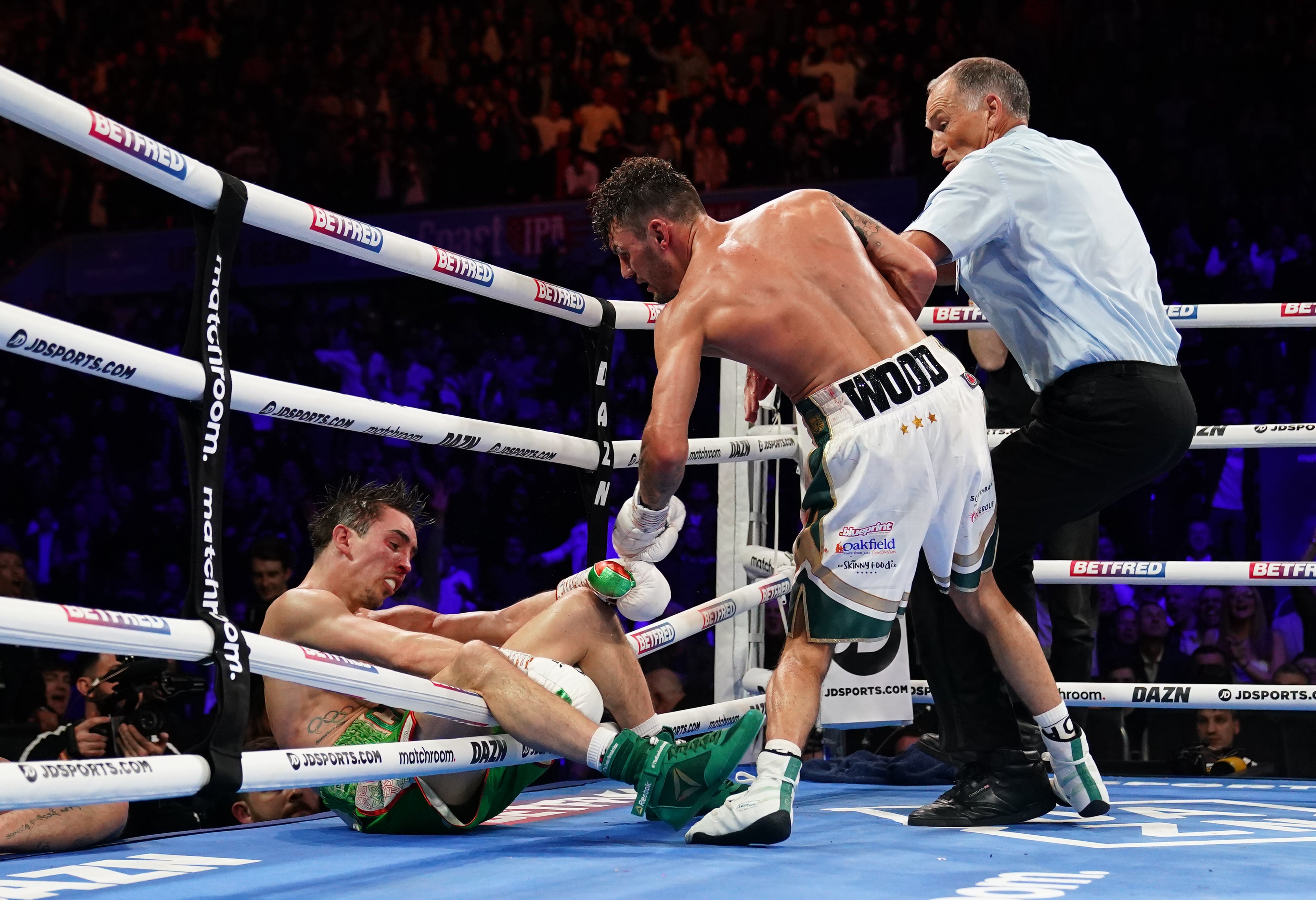 OC: Jermell Charlo vs Brian Castano 2. This fight had absolutely everything: 10 rounds of twists and turns, beautiful short hooks, stunning uppercuts, and the occasional wild, ugly swing. What makes this my fight of the year is the quality; in these long ‘wars’, it is so easy to pick a slugfest – to rely on words like heart, grit or determination. Yes, all of those things are hugely admirable, but these guys had all of that for 10 rounds and the quality didn’t drop. Tiredness didn’t see off Castano, good boxing did, and no less than 10 rounds in. Brilliant.

Knockout of the year

OC: Leigh Wood vs Michael Conlan. Talk about a comeback! Wood was all but done after a monster left hook caught him on the chin at the end of Round 1 and he was saved by the bell. While the narrative of the comeback in an epic 12-rounder is enough to rave about, the knockout itself is well worthy of this award. When it eventually came in Round 12, the finish was brutal, with a flurry of devastating right hands seeing Conlan stumble then dramatically fall through the ropes and out of the ring.

JR: The drama of Wood vs Conlan might make that my knockout of the year, too, but for variety I’ll decide between two others. I’m close to choosing Caleb Plant’s left hook over Anthony Dirrell, complete with that controversial undertaker celebration, but it’s Joe Cordina against Kenichi Ogawa for what was at stake. A shotgun right put the Japanese man on his back, and the knockout is almost better when you see the fighter almost beat the count before rolling over. Incredible shot to win your first world title.

AP: Chris Billam-Smith vs Armend Xhoxhaj. “Billam-Smith bias”, you say? Recency bias, too? Maybe, but this was a stunning knockout that combined all the factors a fan tends to look for in a favourite finish. Billam-Smith displayed terrific technique and timing, as well as impressive power to send Xhoxhaj lollopping to the canvas in mesmeric fashion. As the Kosovan fell, courtesy of a jackhammer right hook after a flurry of short shots, Billam-Smith even leaned forward to shout in his opponent’s face. A spiteful end to a sickening sequence. 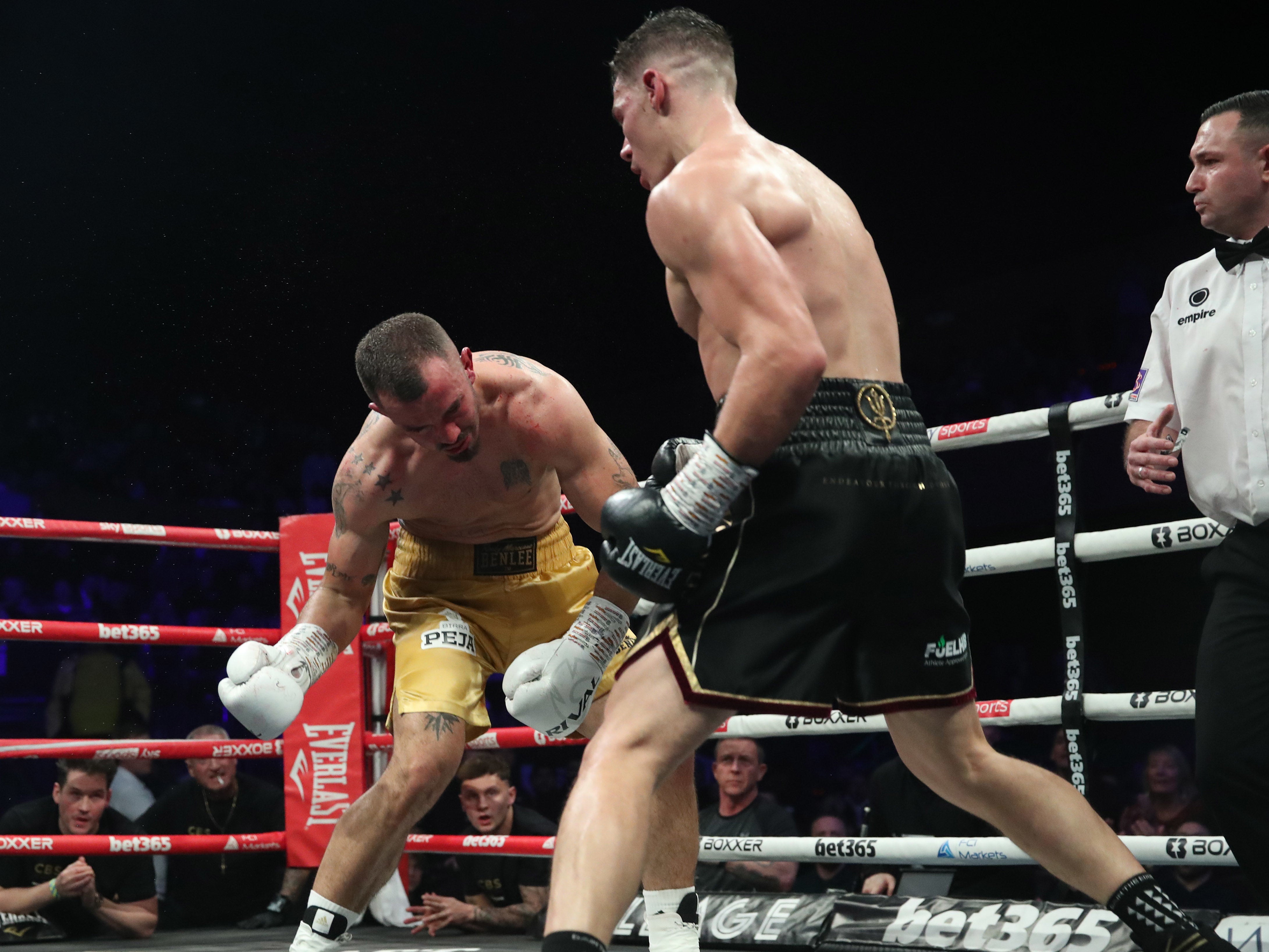 Disappointment of the year

AP: The collapse of Conor Benn vs Chris Eubank Jr. I won’t pretend this was a fight that we needed, but the narrative was unique – a rarity in a sport where you feel like you’ve seen it all – and the contest would have likely been competitive. For it to fall apart was desperately disappointing, especially on such short notice and due to Benn’s drug-test results. For the sake of boxing and Benn’s career, fans should really put Schadenfreude aside and hope the 26-year-old can clear his name. The problem is: Adverse drug-test findings leave a blemish on a boxer’s career, no matter what is proved or disproved at a later date. Depending on how this all plays out in the long term, Benn vs Eubank Jr, three decades after Nigel Benn fought Chris Eubank last, would still be a fun fight and event.

OC: Tyson Fury. Sigh, where to start? Is he retired, again? Is he fighting for less than £500million? Just what is going on with the “Gypsy King”? We could’ve seen back-to-back mega-fights in Fury vs Joshua and Fury vs Usyk. Instead, we were left to pay £24.95 for Fury vs Chisora 3, a bout that nobody wanted. I will never complain about Fury’s fighting, as he is simply a joy to watch, but he’s meant for more than a trilogy fight with Chisora; legacy fights, or at the very least meaningful fights that impact the heavyweight division. I hope 2023 is the year we see Fury pull away from his current path and rise above the politics that dominate the boxing world.

JR: Following Fury can be exhausting, but that’s a column in itself, so how about more inept judging? Jack Catterall being denied the undisputed light-welterweight title against Josh Taylor and the greatest night of his life. Cries of corruption swirled, Taylor dropped a belt, the rematch is made, but redemption can never, ever be complete. It leaves you with a sinking feeling despite knowing it’s a possibility as the cards are read out. That’s boxing.

AP: Tyson Fury vs Oleksandr Usyk. I was very close to picking Taylor vs Serrano 2, and I really do hope we see that, but their first clash will go down in history regardless – and I take some solace in that. A rematch between the women would not have the same historical implications, whereas Fury vs Usyk would; not since 2000 has the heavyweight division had an undisputed champion, which is an indictment on the sport’s matchmaking for more than two decades. It’s bad enough that an undisputed champion couldn’t be crowned through an all-British bout between Fury and Joshua, but there should be fewer politics involved in the “Gypsy King” taking on Usyk. Also, the latter contest would be a genuinely fascinating affair – technically and tactically. Make it happen, for the love of boxing. 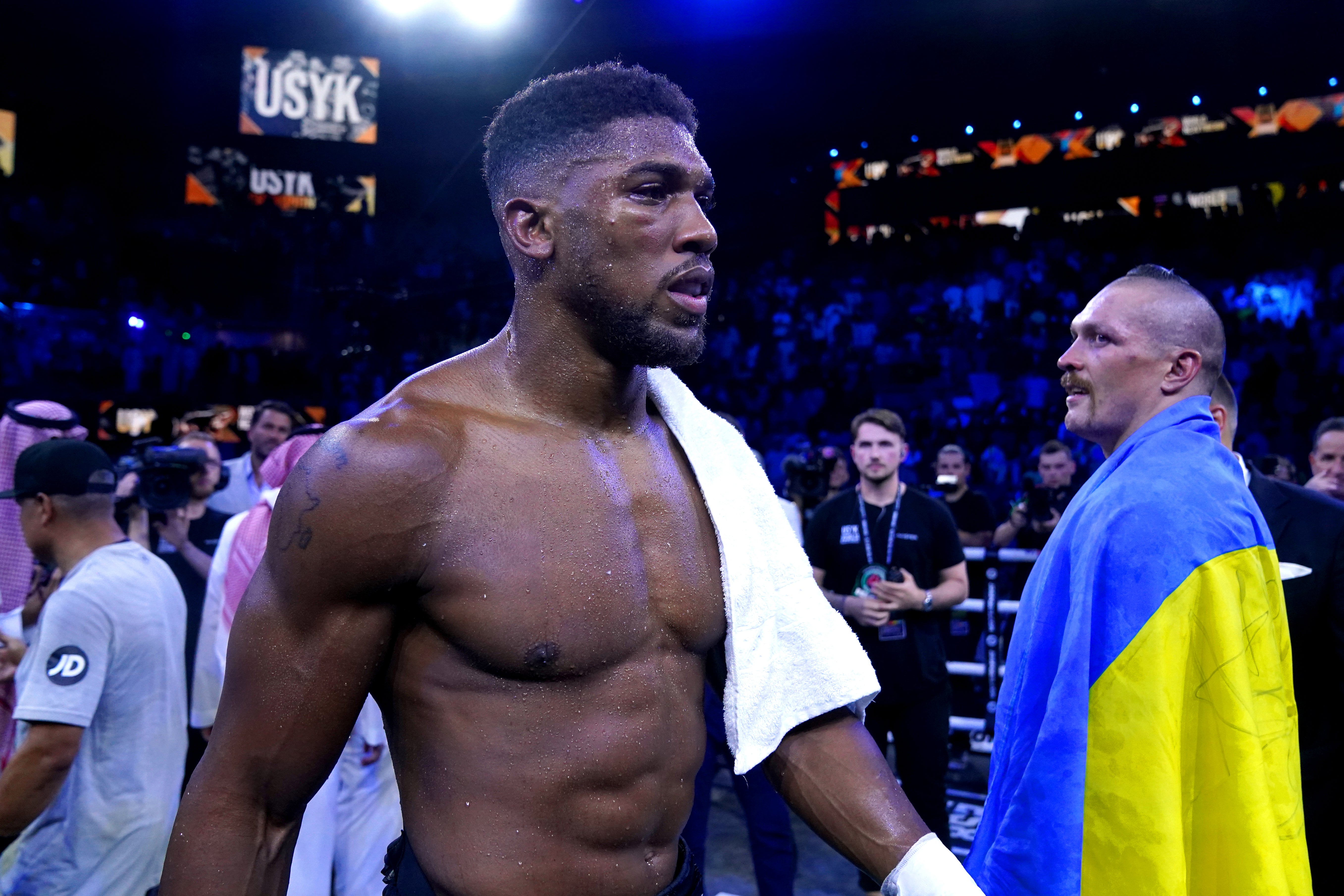 JR: It’s Tyson Fury vs Oleksandr Usyk, obviously. The sport shoots itself in the foot time and again, but if this can’t be made in 2023, what are we even doing? But let’s see Errol Spence Jr vs Terence Crawford please, the biggest fight in the sport since Floyd Mayweather Jr vs Manny Pacquiao beneath the heavyweights. Both men are getting up in years, the window is fast closing, it has to happen. Lightweight is the division in boxing; if two fights from the top five in the rankings get made, I’ll be happy. If I can choose? Devin Haney vs Vasyl Lomachenko to witness chess-like mastery in the ring and then Gervonta “Tank” Davis vs Ryan Garcia for box office entertainment and nastiness, including a probable throwback to the 24/7 documentaries in the build-up.

OC: Anthony Joshua vs Deontay Wilder. While Fury and Usyk are clearly a cut above the rest of the heavyweight division, that doesn’t mean there isn’t still a lot to fight for. I propose a heavyweight clash between Joshua and Wilder. I feel myself get childishly giddy when thinking about how this one could play out. Say what you like about Wilder as a technician; he is by far the most entertaining heavyweight in the sport. A bout with “AJ” would bring guaranteed fireworks and a lot of unpredictability. A lot would depend on which version of Joshua we would see on the night, but I’d have no problem staying up to the wee hours to watch this. Take my money now.