The window for these games sits between the end of the NBL regular season and the start of the semi-finals with the Boomers, who have already qualified for the World Cup, facing road games in Kazakhstan and Iran. 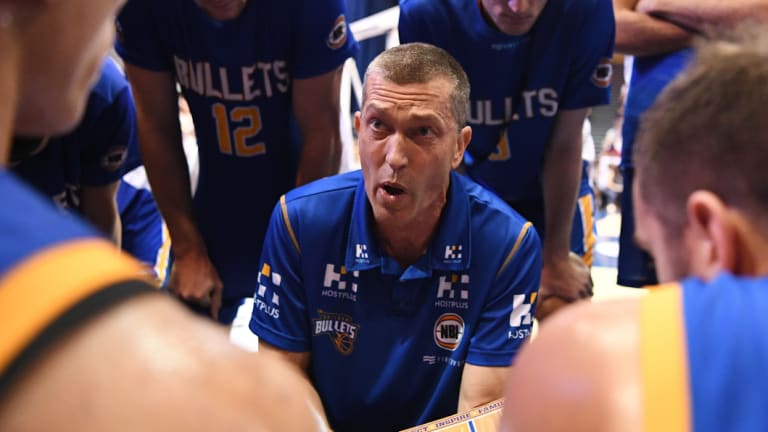 Tricky situation: Andrej Lemanis will need to work out which NBL-based players to take on the Boomers’ February trip.Credit:AAP

Lemanis, who also coaches the Brisbane Bullets, has drawn 22 of his 24 players from the NBL and worked closely with players and coaches when deciding who to pick and who to rest.

The selection "sentiment" for the February window was to excuse players involved in semi-finals due to the long road trip – this would also eliminate the potential for a star player being injured.

Lemanis has avoided risking players during qualifying as he excused Melbourne's Chris Goulding and Perth's Angus Brandt this window so they could strengthen up nagging injuries while he kept the same management plan for Nathan Jawai that Cairns use, only playing him 14 minutes in Monday's win over Qatar.

But Lemanis pointed out that it might not be practical to only select players from outside the finals as the top four might not be finalised until the day before the Boomers fly out.

"That's something we need to have a big chat about now in conjunction with the players to find out what they want to do," Lemanis said.

"There is a bit of consideration to be had before that next window in terms of how much disruption it causes to the NBL.

"Your sentiment is right but there is also a logistical question in that you may not know until the Sunday which teams are in the playoffs, then you fly out on the Monday for the international window."

The issue of timing is a serious one as arranging plane tickets and travel visas takes time and can’t be easily changed. This is where Lemanis will need to be crafty in who he calls up.

There is also the issue of wanting to keep the team cohesive enough that they can still win both games and maintain Australia’s place at the top of their group.

New Zealand Tall Blacks coach Paul Henare faces the same issue in the final window with his side, who have also qualified for the World Cup, travelling to Lebanon and Jordan.

"Who knows [which NBL teams will make it]? Third, fourth and fifth place might still be playing out in the final round so how do you book the tickets?" Lemanis said.

"There is the practicalities of it

"The sentiment is good but it’s how we manage it from a practicality point of view?"

This time last season in the NBL the teams in the top four were the same four that made the finals, so if that is the case this season then Perth, Melbourne, Sydney and Brisbane will play finals.

This would make it especially tough for Lemanis as 16 of his 22 NBL-based players come from those clubs.

When asked how he would find a solution, Lemanis shrugged.

"I don’t know but as long as the Brisbane Bullets get in we will be fine," Lemanis said breaking into a laugh.

"It’s tough. It will take some communication and some planning for sure."