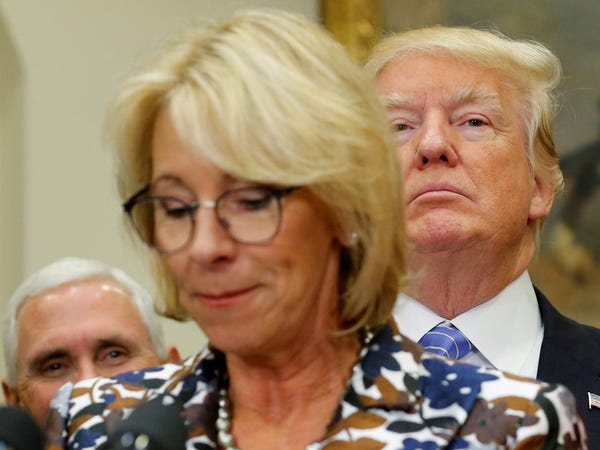 The Trump administration is taking further action to prevent transgender athletes from competing with and against those who share their same gender identity.

According to The New York Times, Betsy DeVos and the Department of Education have informed a handful of Connecticut schools that they would not receive an upcoming round of funding unless they cut ties with the Connecticut Interscholastic Athletic Conference. The conference, which acts as the governing body for interscholastic sports in the state, currently allows trans students to participate on teams that align with their gender identity.

A whopping $18 million in grants could be withheld if schools do not disaffiliate with the CIAC by October 1.

"It's effectively extortion," New Haven Mayor Justin Elicker told The Times. "The federal government is trying to force us to take a side against transgender individuals."

Magnet schools in New Haven districts and some in Hartford and southeast Connecticut are among those targeted by the Trump administration. The grants on the line are typically intended to help schools with desegregation efforts, enabling minority students to attend higher-achieving schools than those in their own neighborhoods.

Now, those same grants are being leveraged to coerce district leaders on a completely separate issue. The Trump administration insists that "it's not extortion to require school districts to follow federal law" even though the Supreme Court ruled in June that Title VII of the Civil Rights Act protects against discrimination based on gender identity.

Still, the administration insists that allowing individuals assigned as males at birth to compete in girls' sports violates Title IX, which prohibits publicly-funded institutions from engaging in discrimination based on sex.

"Congress requires the department to withhold funds from schools that aren't in compliance with the law," Education Department spokesperson Angela Morabito told the Times. "Connecticut applicants declined — on multiple occasions — to assure the Office for Civil Rights that they are in compliance with Title IX."

In an August 31 letter to the districts in question, the Office for Civil Rights insisted that a Title IX requirement that schools provide "separate teams for members of each sex" only extends to the "operation of [sports] teams for biological males, and for biological females."

Now, the Connecticut districts have a choice to make; drop out of the CIAC — thereby discriminating against transgender student-athletes — or face a dramatic reduction in funding that necessarily restricts their ability to "support students of color in desegregation efforts in Connecticut."

"I never thought I'd see a day when the Office for Civil Rights would be advocating either of those policies," Michelle C. Laubin, a lawyer representing New Haven and Groton schools, told The Times.