Jason Warren gave up a spring carnival preparation to focus on the Magic Millions with Bel Sonic and has plotted his path to the Gold Coast for five months.

The Bel Esprit four-year-old finished down the track in the Magic Millions Guineas last year but has shown enough since his debut as a two-year-old when he was third to Merchant Navy to suggest that "there is a good race in him". 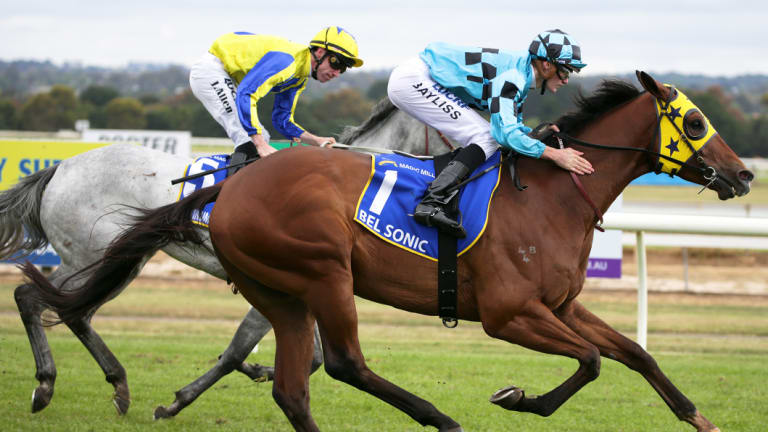 Bel Sonic has made a habit bumping into good ones, running fourth to Nature Strip in the Creswick Stakes at Flemington on Winter Championship day in July.

“Just after that run I felt he needed a longer spell to mature and be at his best,” Warren said. “You have these restricted million-dollar races as a carrot, so why not target them.

“I sat down and chose the  Magic Millions Classic at Ballarat, then looked at the Wyong race and this weekend as the way to get him to the Gold Coast in the best possible shape. It has been a five-month plan to get here.

“We might have missed the carnival but we are seeing the benefit of those extra couple of weeks out in the paddock now.”

We might have missed the carnival but we are seeing the benefit of those extra couple of weeks out in the paddock now.

Bel Sonic stormed home to take the Magic Millions Classic at Ballarat in impressive fashion but the presence of Invincible Star in the Wyong Magic Millions three and four-year-old earlier in the month led  Warren to take the pre-Christmas option at Warwick Farm.

He had a barrier trial at Randwick on Monday, where he ran second to To Excess, and is ready to go to Warwick Farm.

“I saw Gai’s horse in the Wyong race and didn’t think we could beat her, so just waited for this race. His trial was perfect and really it is the best he has been,” Warren said.

“The wet track is not going to worry him, and I think he gets into the race particularly well at the weights.

“He has always had good ability, and I think he is ready to show it this preparation.

“We will use this race to decide which race to target at the Magic Millions. There is the Snippets, where you will take on Houtzen over 1200m, or the cup at 1400m.

“His style might lend him towards the extra trip of the cup, because he does like to get back and find the line.”

Warren will also take Randwick runner-up from last week Miss Toorak Flyer to the Magic Millions carnival to run in the Country Cup.

In other Sydney news, Andrew Adkins will be out of the saddle for at least two weeks after being diagnosed with pericarditis, or inflammation of the heart.

Meanwhile, South Australian racing is in crisis after it announced huge cuts to prizemoney and infrastructure  because of lack of support from the state government.

"With the exclusion of Tasmania, every other state has now introduced a point of consumption tax. Each has recognised it is money generated by the racing industry, and all have returned funding to the industry – but not in South Australia," said Frances Nelson, the chair of Racing SA and Thoroughbred Racing SA.

"The cuts we have announced are the initial steps and we will have to consider removing some race dates as part of our longer-term strategy, and this will hit our regional areas hardest.

"While other states receive tens of millions from their governments to grow their industries, we receive none while also being forced to compete with one hand tied behind our back.

"All I want is a level playing field to ensure the South Australian racing industry can compete sustainably on its own terms and protect its own future."