Pro Australian surfer Mikey Wright has been caught on camera saving a person swept away in a strong current and rough waves in Hawaii.

Wright was sitting on the beachfront, believed to be at Oahu's North Shore, when he witnessed a beachgoer being swept away after a set cleaned up the beach. They were quickly overwhelmed in the current. 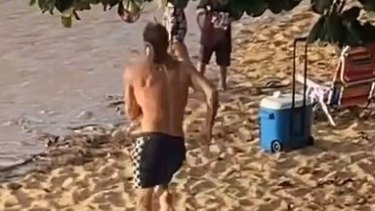 Mikey Wright running into the surf to the person’s aid. Credit:Instagram

Wright and the swimmer were hit by a series of heavy waves in the shallows before a group on the sand were able to reach them, and pull the pair to safety.

Wright comes from a family of world-class surfers, including siblings Owen and two-time women's world champion Tyler – hailing from the South Coast town of Culburra. 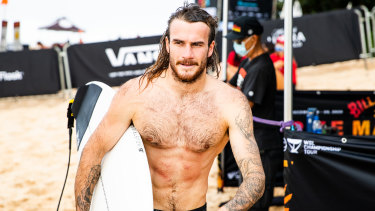 Mikey Wright did not hesitate to race into the rough surf to save a swimmer in trouble.Credit:World Surf League via Getty Images

The video, posted on Instagram by Wright as well as Tyler, has been viewed thousands of times and shared by surfers around the world.

"Closing out 2020 with some hero shit by (Mikey)," Tyler wrote on Instagram.

Fellow surfers and fans flooded the comments with praise for the 24-year-old Aussie.